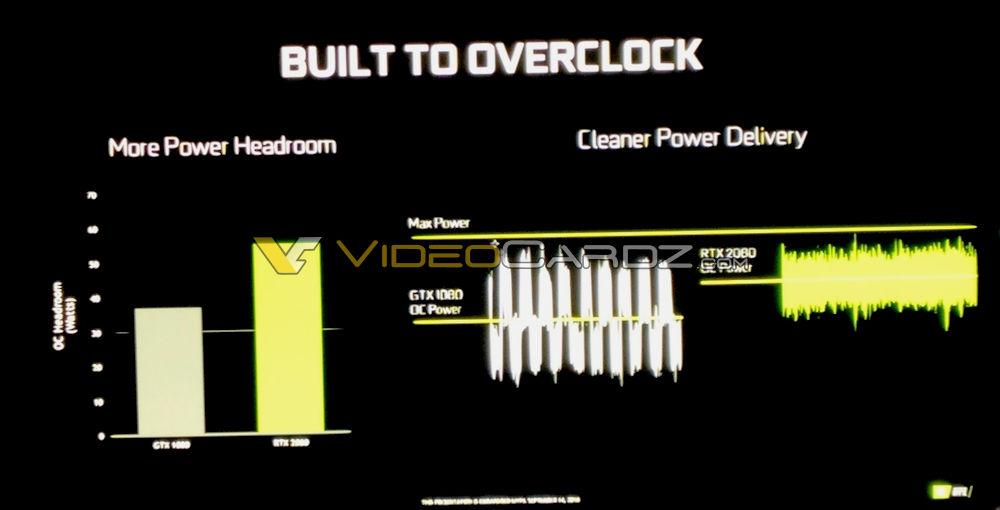 Another day, another leak by Videocardz, this time about a design feature of RTX-series that is sure to resonate well with enthusiasts getting ready to part with their money. It looks like NVIDIA has drastically improved power delivery systems and voltage curves with their new Turing lineup.  If the leaked slides are anything to be believed, the card's PCB will deliver a much cleaner voltage supply to the GPU - allowing for greater OC headrooms and cooler operation.

Let's start with the sound levels and acoustics. The GTX 1080 - which is what NVIDIA is using for comparison against the RTX 2080 - can become as loud as 36 dBA under load but the RTX 2080 will only hit a maximum peak of 29 dBA. This is a pretty significant reduction and can be the difference between "annoying-whining-hum" and "a-comfortable-hum-that-you-can-barely-hear". To put this into perspective a standard whisper is around 30 dBA. You can officially say that these things are as quiet as a whisper now. 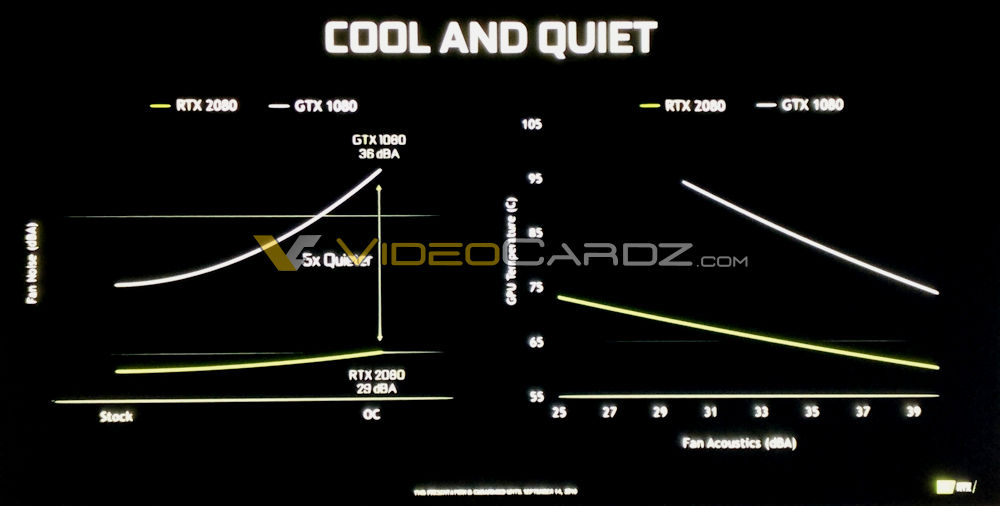 Up next, we have the slides that overclockers will actually be interested. NVIDIA has given new voltage curves of the cards and the VRMs can supply an unholy level of amperege to the GPU if required. Not only that but the voltage signal is now super clean and a lot tighter than before. Noise and ripple has been virtually eliminated and the company has managed to add on an additional 20 Watts of TDP envelope for a total of 55 Watts (this was 35 Watts with the GTX 1080). These additional few wattts will allow for more overclocking headroom - which I am sure their own Turbo Dynamic boost will utilize as well.

This brings me to the second point. While the slides clearly state that the GPU is meant for overclocking, these features will impact the average joe a lot more than actual professional OC-ers - wanna know why? Because they will undoubtedly be utilized by their dynamic turbo boost service which automatically applies the highest stable overclock possible to the card given the thermal conditions. This is also why Pascal cards run a lot higher in terms of frequency than their minimum guaranteed turbo boost - this is also why I suspect Turing will run a lot higher than the guaranteed turbo boosts imply.