NVIDIA's official GeForce RTX 3060 Ti graphics card performance benchmarks have leaked out by Videocardz. As per the numbers, the GeForce RTX 3060 Ti looks to perform better than the Turing based GeForce RTX 2080 SUPER in all regards which would make it a pretty nice 1080p and even 1440p gaming option.

The NVIDIA GeForce RTX 3060 Ti is going to be the first sub-$500 US graphics card within the RTX 30 series family. It's also going to be the first mainstream performance variant from any two GPU vendors (AMD/NVIDIA) who are currently focused on their higher-end lineups. On paper, the RTX 3060 Ti aims to be a successor to the RTX 2060 SUPER while offering performance on par or faster than the RTX 2080 SUPER. 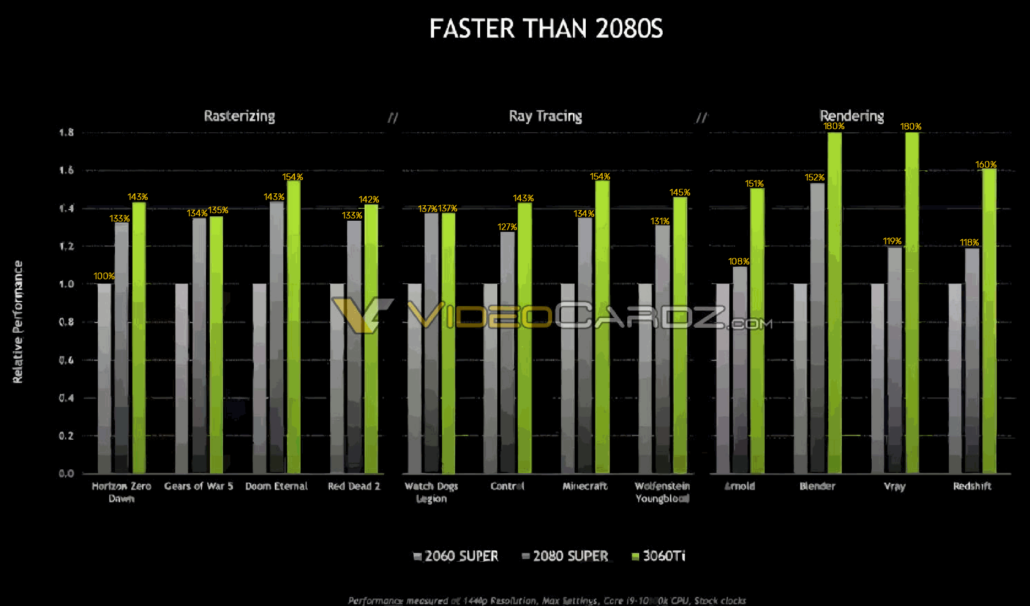 Moving over to content creation and rendering performance, the NVIDIA GeForce RTX 3060 Ti does score a bigger win with a 67.8% uplift over the RTX 2060 SUPER and a 36.3% uplift over the GeForce RTX 2080 SUPER. Now, these are definitely some huge gains for the RTX 2060 SUPER successor but we have to wait for actual reviews to validate whether NVIDIA's results match our own.

The specifications for the GeForce RTX 3060 Ti feature the GA104 GPU which confirms that this is the second GPU to feature the said chip. There's no specific variant or SKU number mentioned but previous reports have hinted at the GA104-200 SKU for the GeForce RTX 3060 Ti. The GA104-200 GPU on the NVIDIA RTX 3060 Ti graphics card features 4864 CUDA Cores, 80 ROPs, clock speeds 1410 MHz base, and 1665 MHz boost. Based on the specs, the card should deliver an effective compute horsepower of 16.2 TFLOPs.