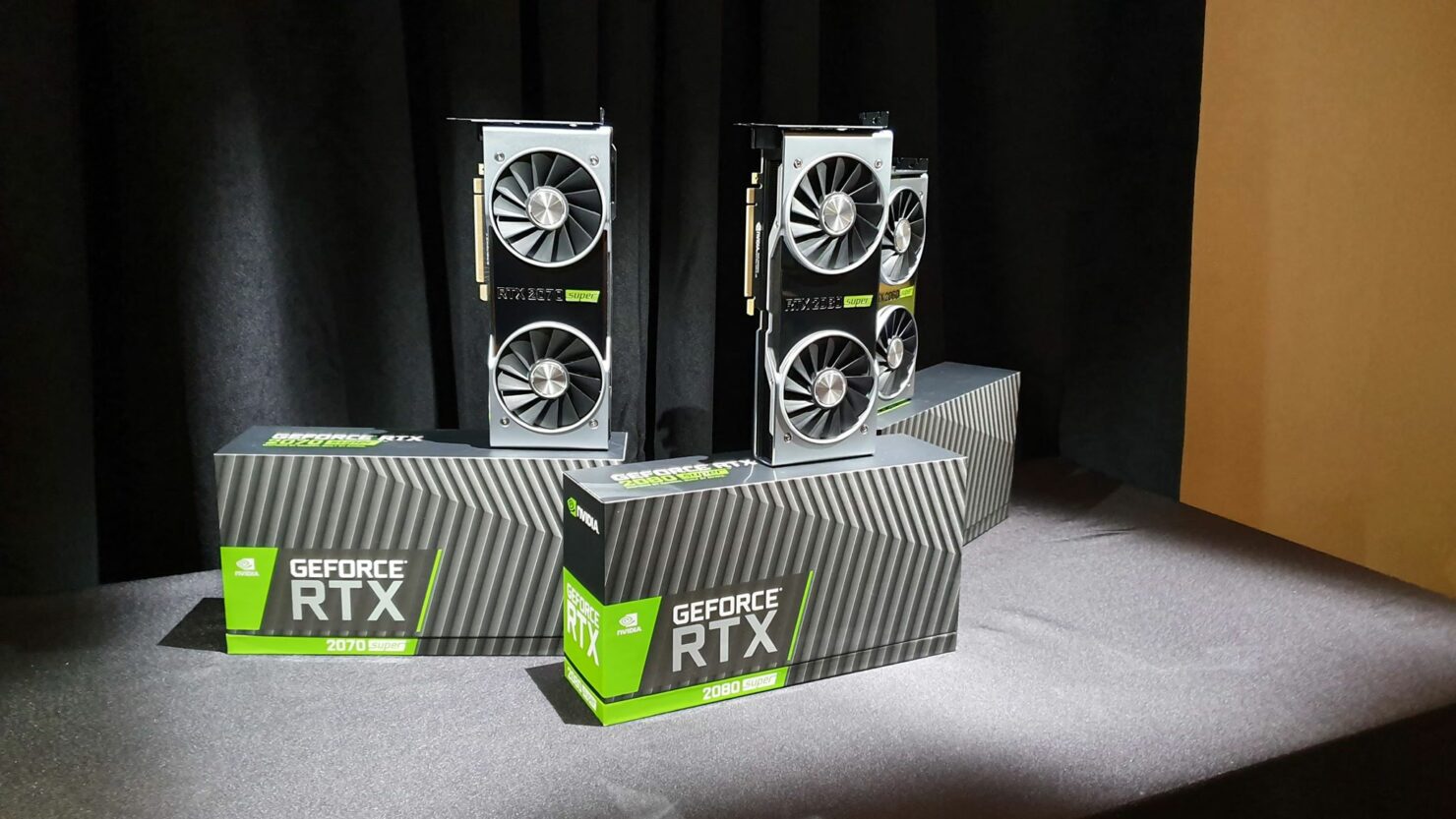 It looks like the rumor mill is now suggesting that NVIDIA is indeed working on its flagship 2020 product, the GeForce RTX 2080 Ti SUPER. The rumor comes from Twitter user Kopite7kimi who previously reported accurate specifications for NVIDIA's GeForce RTX SUPER and GeForce GTX 16 series lineup prior to their official introduction. Still, since this story has a major twist to it, we would advise readers to take it with a grain of salt.

There's some interesting information surrounding both the Turing based GeForce RTX and the next-gen Ampere GPUs from NVIDIA. When NVIDIA announced their new GeForce RTX SUPER lineup, they made it clear that the RTX 2080 Ti would live on as the best gaming graphics card. There's no surprise that even a year after since the card launched, it still remains the high-end graphics card king with no competition in near sight.

However, AMD plans to release their own high-end Navi graphics cards later in 2020 but would those compete with NVIDIA's Turing or Ampere? Historically, NVIDIA always has had an answer for AMD's flagship part. 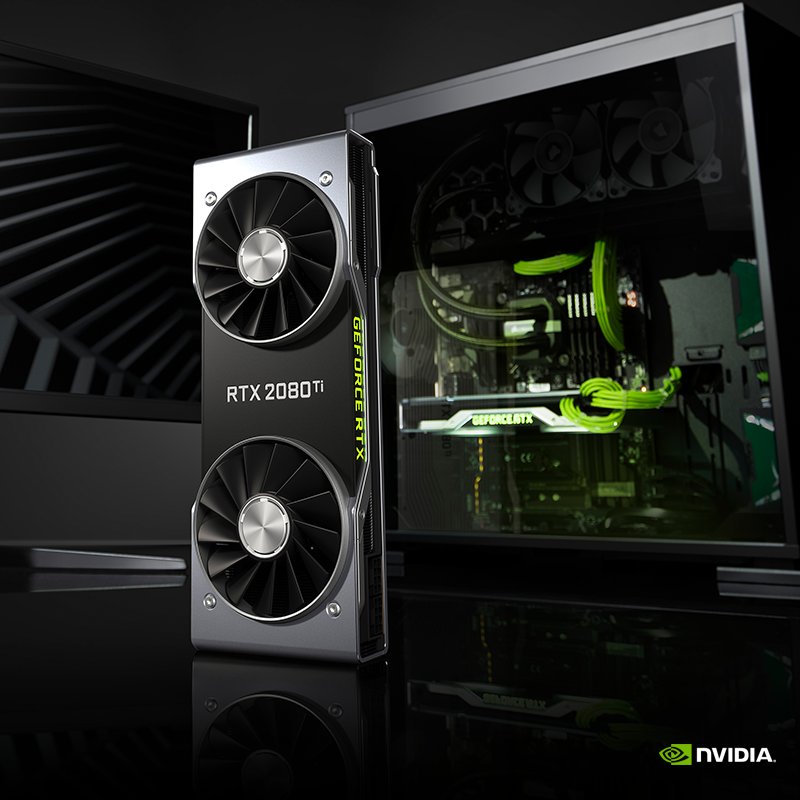 When AMD released their enthusiast Radeon RX 290X graphics card against the GeForce GTX 780, NVIDIA didn't wait at all and in a few weeks, released the GTX 780 Ti as an answer. Prior to the release of the Radeon R9 Fury X, NVIDIA released their flagship GTX 980 Ti which the AMD offering had a hard time competing against due to extremely good efficiency and performance numbers of the Maxwell GM200 GPU. Similarly, in 2017, when AMD was about to unveil their Radeon RX Vega series high-end cards, NVIDIA outed the GTX 1080 Ti, offering superb performance but since the RX Vega 64 turned out to be more of a GTX 1080 competitor, NVIDIA bumped up the prices of their top 'Ti' parts, now retailing at and around $1000 US.

But with Turing, NVIDIA announced the RTX 2080 Ti alongside the rest of the lineup and didn't wait for any high-end AMD release to occur prior to its launch. There are reasons aside from AMD not having a proper flagship card in their pockets. The RTX 2080 looked very similar to the GTX 1080 Ti in terms of raw performance and the RTX features would have to wait for months before they got implemented in AAA titles. There were even rumors before the launch of Turing cards that NVIDIA was planning to release the 2080 Ti as a Titan class product with the launch of the original RTX 2080 Ti being scheduled later on, say around the SUPER series. But now, the RTX 2080 Ti and Titan RTX both exist and they are very different cards. The Titan RTX is definitely the faster card if reference variants of both are to be compared but it still leaves some space for the 2080 Ti SUPER to happen.

So if the rumor holds true and NVIDIA indeed plans to launch a SUPER variant of the GeForce RTX 2080 Ti, then here are a few things we can expect from the card. First of all, the 2080 Ti launched back in September of 2018 which means more than a year has passed since its introduction. It lives on as the best gaming card but consumers always demand more. The SUPER RTX lineup gave users a good performance bump for the same price and those who were holding out on purchasing an RTX card saw more reason to get one.

There are also people many gamers who are using GTX 1080 and GTX 1080 Ti graphics cards. They don't see the performance upgrade of the RTX 2080 Ti as reason enough to buy one but for NVIDIA to push them, the RTX 2080 Ti SUPER can make lots of sense. First of all, the specifications of RTX 2080 Ti SUPER would feature the full Turing TU102 GPU core as featured on the Titan RTX. It would come with higher clocks and a slightly higher TDP than the RTX 2080 Ti.

The memory would be the main differentiating factor for both cards. The Titan RTX features 24 GB of GDDR6 memory clocked at 14 Gbps along a 384-bit bus. The RTX 2080 Ti SUPER could go two routes, either 12 GB of GDDR6 memory running along a 384-bit bus at 16 Gbps or 11 GB of GDDR6 memory running alongside a 352-bit bus interface. The latter seems more plausible since the top tier GeForce cards have been featuring cut-down memory buses for a while now but if 384-bit is to happen, then that would be a super upgrade for sure. The GeForce RTX 2080 SUPER didn't support the full 16 Gbps dies because that would have required a PCB revision which would cost AIBs some extra money but with a card like the RTX 2080 Ti SUPER, AIBs may be willing to make the necessary upgrades.

Pricing of the card would be a major consideration for buyers before they go out and buy the new card. I believe that NVIDIA would do what they did with the SUPER lineup. Remove the Founders edition tax and stick with one MSRP which in the case of the RTX 2080 Ti was $999 US. NVIDIA can afford that since Turing has been in production for over a year now and there's no graphics unit supply constraint affecting the Turing cards at all.

Now the main reason we are hearing this news is that industry insiders and experts believe that NVIDIA's Next-Generation Ampere GPUs aren't expected to launch until the end of 2020 or even early 2021. This again means that since NVIDIA won't have a new major launch product for 2020, they would be offering a supercharged RTX 2080 Ti to take on whatever AMD has to release on the high-end side. Considering the performance difference between the RX 5700 XT and GeForce RTX 2080 Ti is already huge, the higher-end Navi cards would even find a tough time competing against the RTX 2080 SUPER, let alone a SUPER variant of the 2080 Ti.

The same source also alleges that one of NVIDIA's Ampere based GPU known as GA101 has been canceled. We don't know the details of this GPU but the source has previously stated that it was a smaller variant of the top GA100 GPU core. It was said to be half of the GA100 and would allegedly feature a 3072-bit bus interface and a much smaller die compared to the GA100 which is rumored to have 55 Billion transistors, 2304 Gbps bandwidth speed from 6 stacks of HBM and a die size of around 800mm2.

Also, Ascii.jp's senior editor, Yusuke Ohara, has provided his own reasoning on Ampere's release. We can't pinpoint which semiconductor company NVIDIA would opt for but they have good ties with both Samsung and TSMC. Recent reports have pointed that NVIDIA has plans to go with Samsung and use their advanced 5LPE EUV process for their Ampere GPUs but that remains to be seen. 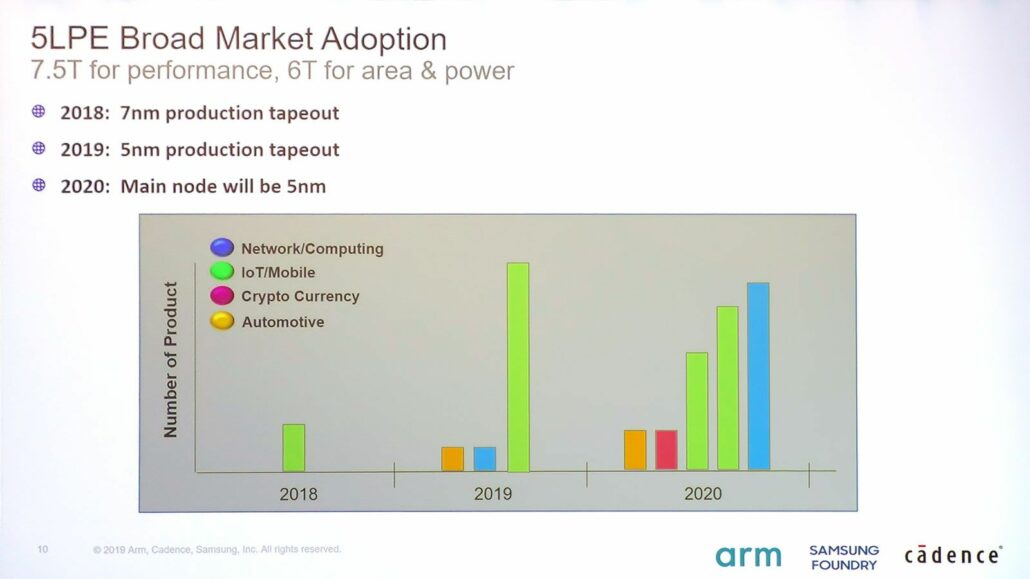 In Samsung's latest 5nm product tape out roadmap, they show that only one tape out happened for the networking/computing segment. This could indeed be NVIDIA Ampere but they have several tapeouts planned for 2020 too. The whole situation with Ampere isn't clear but don't expect the launch any time soon. We may get an update of Ampere next year at GTC 2020 but that's all we know so far.