The first NVIDIA GeForce GTX Titan Z review has hit the web from Dr.Lee (aka DGLee) testing the card at a high resolution of 5K. During its announcement at GTC 2014, NVIDIA called the GeForce GTX Titan Z as the first 5K compatible graphics card in one of their slides but does it lives up to the claim of being the fastest graphics card in terms of 5K gaming performance? 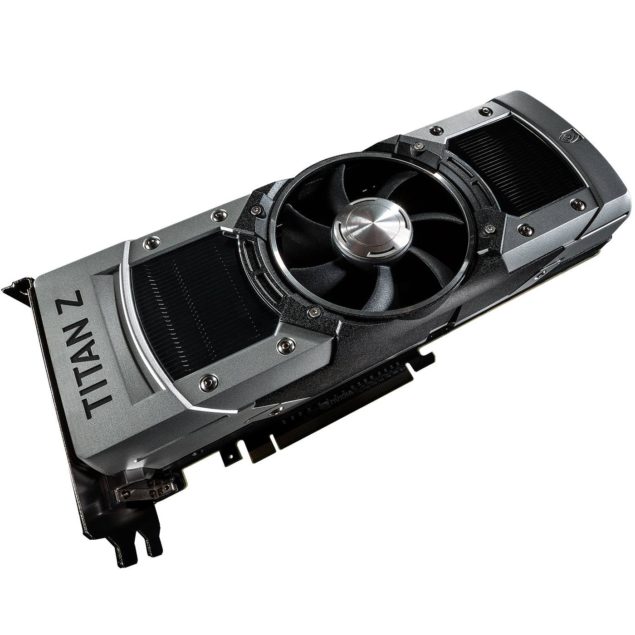 Now some of you may remember that a review of the card from an Asian source leaked prior to this but it wasn't as brief and looked a lot more like a preview of the card. In case you missed the previous news, NVIDIA has failed to launch the GeForce GTX Titan Z which was originally planned for launch on 29th April yet was delayed to 8th May after which it was delayed indefinitely with no words on a new launch schedule by NVIDIA. The only reason to be blamed by several retailers were blamed to be software and driver issues which is taking NVIDIA so long to get the card released that it has missed its launch date twice. If that isn't enough, the performance of the card is no where as good as was expected against its direct competitor and the much cheaper, Radeon R9 295X2 from AMD.

The GeForce GTX Titan Z is manufactured with two GK110-350-B1 chips under its hood that pack 7.1 billion transistors each. The GeForce GTX Titan Z replaces the GeForce GTX 690 boasting dual-GK110 cores compared to dual-GK104 cores on its predecessor. The GeForce GTX Titan Z will feature two GK110 cores with 5760 Cuda Cores, 448 TMUs and 96 ROPs. The card features a 384-bit x 2 bus which will run across a massive 12 GB VRAM. This is an impressive feature giving developers and games an unprecedented amount of VRAM for use. The memory is clocked at 7 GHz effective clock speed. The core clock speeds are maintained at 705 MHz base and 876 MHz boost clock and the card features a maximum single precision performance of 8.1 TFlops and 2.3 TFlops of double precision.

The NVIDIA GeForce GTX Titan Z is backed by a steep price tag of $2999 US which will make it look like an enthusiast focused card but NVIDIA did mention that the card is aimed towards both gamers and professionals since the power of GK110 and its CUDA Compute capabilities will be available to users at a much lower price tag compared to their Quadro and Tesla variants. Hence the price tag may make sense to some but for gamers, the competitor Radeon R9 295X2 which is priced at half of what NVIDIA’s asking for their flagship card ($1499 US) is going to look like a better option. The NVIDIA GeForce GTX Titan Z has it advantages when it comes to drivers, application support, GeForce optimized titles, 12 GB VRAM (6 GB per GPU) and a cooler that is said to be both silent and aesthetically pleasing for those who are cautious about the looks of their cards.

The one thing I was glad to see about this review is that it showcases the performance of the card on a variety of resolutions which include UltraHD resolutions such as 4K and 5K on which the card is supposed to be benched. All credit goes to Dr.Lee for giving a comprehensive look at the card prior to its launch. Here's a read from him over at HardOCP Forums:

It's no doubt that NVIDIA's GeForce GTX Titan Z as seen in this and several leaks before it has failed to live up to everyone's expectations. What was once thought to be an engineering marvel has no turned into a big disaster for NVIDIA. We hope that NVIDIA somehow manage to solve the driver issues and at the least, launch the card since there will always be professionals looking to buy such solutions but for gamers, the best bet would be a dual GeForce GTX 780 Ti solution if you solely stick with the green team. You can see the performance benchmarks at the end of this article.