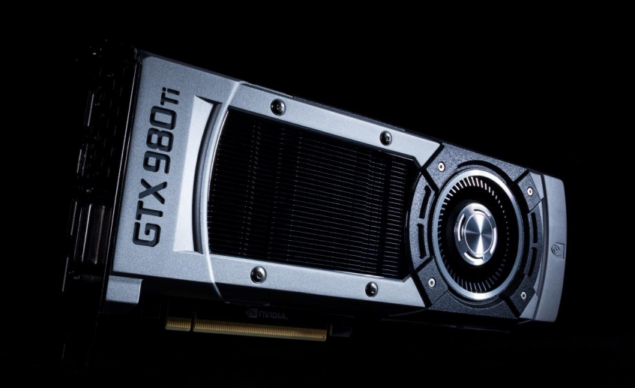 The GeForce GTX Titan X maybe the flagship product of the GeForce 900 series product family but it isn't the fastest anymore. When NVIDIA gave the greenlight to their partners to release custom variants of the GeForce GTX 980 Ti graphics cards, they released several new designs which brought even the 12 Gigs Titan X down to its knees. The GeForce GTX 980 Ti custom variants have plenty of performance and plenty of overclocking head room. One thing we learned from Maxwell is that it clocks great but if overclocks even better as seen on each GPU launched in the lineup, from the entry level GTX 960 to the top end GTX Titan X.

At Computex, we got to see several custom variants for the card and with a price ranging from $649 US on reference and $649+ on non-reference variants, it meant big trouble for the Titan X and even the Radeon R9 Fury X which currently stands as the only competition of this card. The Titan X is now recommended for users who really play at resolutions beyond 4K which are not many to begin with and a price of $999 US means that gamers should just stick with the GTX 980 Ti for their 4K gaming needs. Today, we will talk about some new designs which have been introduced during the past few days in the market.

The ASUS STRIX GTX 980 Ti DirectCU III is a custom card that is built on top of the latest DirectCU III cooling design. We did get to see the cooler back at Computex and a few days ago with the Radeon R9 390X STRIX. ASUS now brings the DirectCU III cooling to the GM200 GPU powered GTX 980 Ti with their exclusive triple wing-blade fans with 0dB operating functionality. These deliver 3 times quieter performance and 30% more airflow the the graphics core. The card being a custom built model features a high-performance 12+2 phase Super Alloy Power II PCB featuring better electrical phases and capacitors to allow clock speeds of 1216 MHz base, 1317 MHz boost and 7200 MHz clock speeds for the memory. This provides 345.6 GB/s bandwidth that makes for a good boost over the regular 336.0 GB/s on reference cards. Do note that both memory and core clocks can be further increased through overclocking since this card uses a better PCB design and a beefy GPU cooler. The card should retail at a price of around $699-$749 US.

At $699 US, the ZOTAC GeForce GTX 980 Ti AMP! Extreme is a triple slot monster. The card is a beast in every regards with a top of the line cooling design that spans three slots. The AMP! Extreme makes use of the latest fan blade technology which take temperature as a basis for their functionality. Two densely packed aluminum fin arrays are stacked horizontally and fused with several heatpipes to dissipate heat from the GPU and VRMs for stable operations. The card is fitted with ZOTAC's Power Boost capacitors which are meant to push clocks for this card beyond the factory overclocked specifications which are 1253 MHz base and 1355 MHz boost and the memory is clocked at 7220 MHz. The card consumes power through dual 8-Pin connectors, has two SLI gold fingers, display outputs include DVI, HDMI and three display ports. The card retails at a price of $699 US which is just $50 more than the reference price of the GTX 980 Ti while boosting performance far beyond the GeForce GTX Titan X.

The GALAX GeForce GTX 980 Ti HOF has the amazing three fan cooler we have been seeing on several Maxwell and Kepler based cards from GALAX. The card has a hot looking backplate on the back and three PWM fans push air through a large heatsink fin array which is equipped with six 6mm heatpipes that run through the heatsink block. Being a special variant for LN2 overclockers, this card is clocked to 1203 MHz on base and 1304 MHz boost clocks which may not sound much compared to the other cards mentioned here but the PCB of this specific card is ready to hit beyond 1500 MHz clock frequencies. The PCB is a 16+3 Phase design with 960 AMPs capacity that is powered by a triple 8-Pin connector which is the beefiest of all 980 Tis. The 12 layer PCB is fitted with an IR PWM system with 3595 controller, 3555 DR MOS and 3599 doubler and includes a hyper boost hardware technology to make the card go in overdrive mode. This card does retail at a hefty price of $899 US but the price is justified by its limited edition nature, you also get the backplate with your own name etched to it.

These three models are the latest arrivals to the GTX 980 Ti product series. We have already seen impressive designs from Gigabyte, MSI, Colorful, Gainward in the initial phase and we will see even more impressive designs later on with MSI prepping up their GeForce GTX 980 Ti Lightning and EVGA working on their full copper based GeForce GTX 980 Ti KINGPIN Edition graphics card. Review from Guru3D show these overclocked variants performing tremendously well at 4K resolution with price of just $50 more than the reference variants. Even the reference model performs well with current technology implementation on the board.