An alleged GPU-z screenshot of NVIDIA's upcoming GeForce GTX 760 has been leaked by Chiphell forums. It was reported that NVIDIA would be releasing their new GeForce GTX 760 in the upcoming week with non-reference models already appearing on various retail sites. 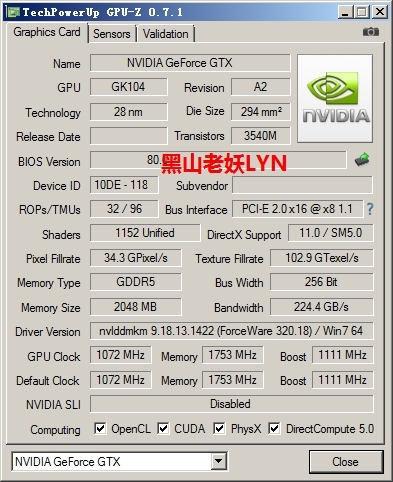 NVIDIA also made sure that the performance deficit caused by the reduction of an SMX unit can be overcome by boosting the clock speeds. The core of the GeForce GTX 760 GPU is configured high at 1072 MHz with a Boost clock of 1111 MHz. If that's not enough, then NVIDIA has also pumped the memory clock at the reference 7 GHz speed for the GeForce 700 series (excluding GeForce 780). These are great numbers which bring the frequencies upto the mark of overclocked GeForce 600 series cards and we would be looking at even faster clocked custom models with the ability to overclock here.

For cooling, it would be a miracle to see the card in its reference design since almost every manufacturer are using their custom coolers with the new GeForce GTX 760 GPU. Even so that each cooler looks distinctively similar to those used on GeForce GTX 770/670/660Ti. NVIDIA is also said to not release the GeForce GTX 760 under the TI branding. The specific reason was not detailed. The GeForce GTX 760 is said to launch within this week at a price of $299.