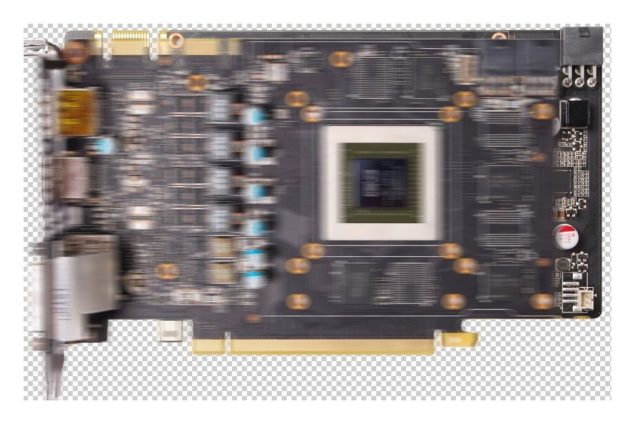 First PCB shot of NVIDIA's upcoming GeForce GTX 670 GPU has been exposed, the PCB pictured is the reference design which as you can note is much smaller than the GTX 680.

The GTX 670 is equipped with the GK104 Kepler core with one of its SMX unit disabled, This means the GPU holds 1344 Cores, 112 TMUs and 32 ROPs. The Core clock is maintained at 915MHz while memory runs at 6GHz effective frequency. The card features a 4 Phase VRM design which powers the core and memory, It is powered through dual 6 Pin connectors.

Display outputs include 2 DVI and Single HDMI + Display Port, There's also support for Quad-Way SLI through the two goldfingers. From the previous leaked colorful GTX 670 pictures, we saw that there were 4 memory chips at the back and front of the PCB and space left for eight additional chips which suggests we would be looking at 4GB models after launch. MSRP is suggested around $349-$399 while non-reference models would cost extra.

You can see two models of the GTX 670 GPU in the following links: