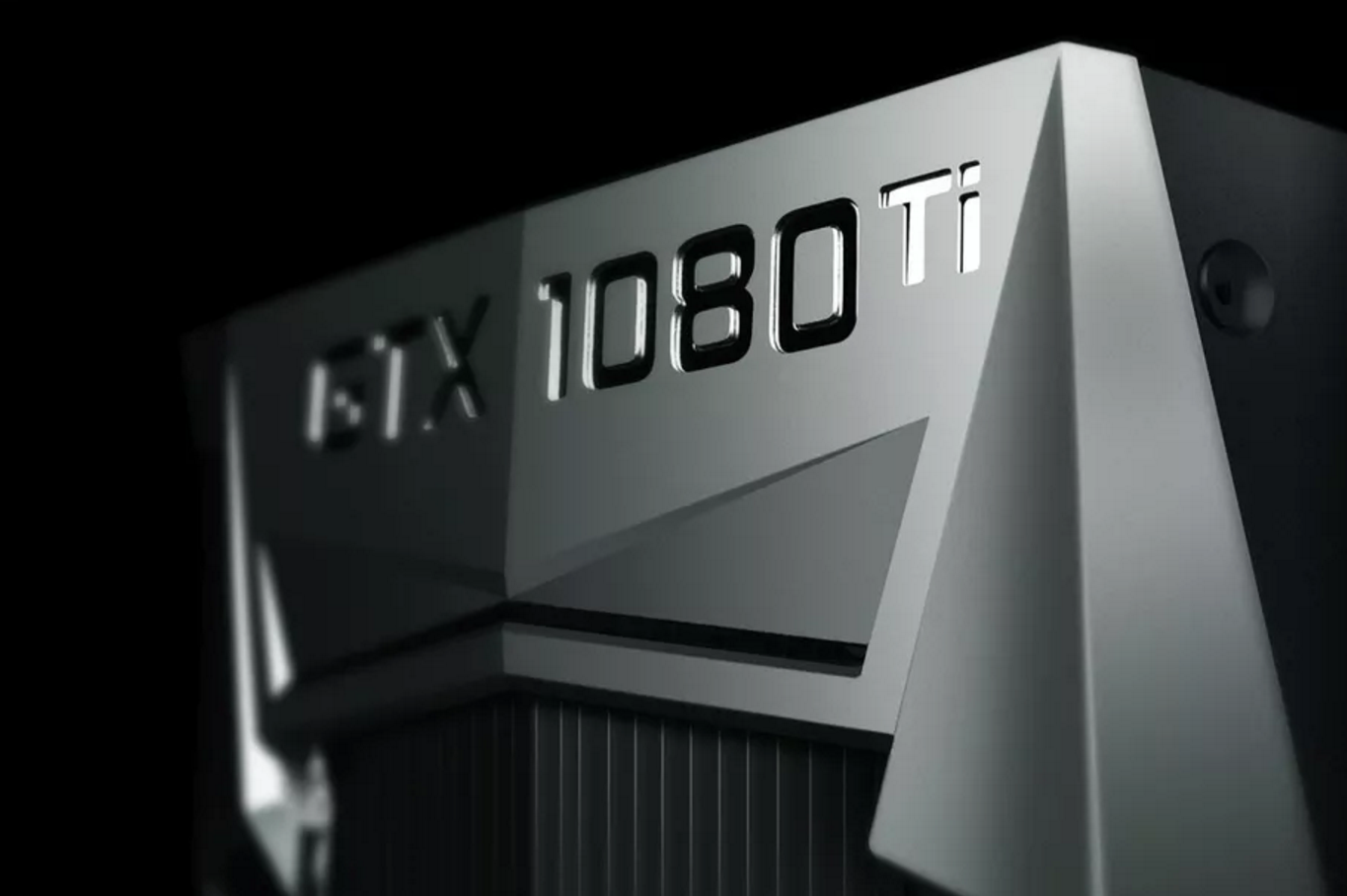 The first NVIDIA GeForce GTX 1080 Ti custom model graphics card reviews have been published by several tech sites. The performance review confirms that the GeForce GTX 1080 Ti and AIB assembled custom variants will be the first enthusiast-tier cards to achieve playable FPS at 4K resolution making these the ultimate cards for enthusiast builders and gamers.

There's no doubt that the GeForce GTX 1080 Ti is the fastest graphics card on the planet. It's NVIDIA's flagship GeForce product and holds the GPU performance crown at stock and overclocked speeds. NVIDIA's AIB partners are currently preparing a vast array of custom GTX 1080 Ti models and several tech sites have managed to test various custom cards. The main focus of the GTX 1080 Ti was and should be the 4K / VR gaming performance which this card was made for.

Before we get into details, the cards that were tested include the ASUS ROG GTX 1080 Ti STRIX OC and Inno3D iChill GTX 1080 Ti X3. The cards were tested by TechPowerUp and Hexus and details of one of the cards can be found below.

The ASUS ROG GeForce GTX 1080 Ti STRIX OC features the latest DirectCU III cooling system, combining Super Alloy Power II components with NVIDIA's Pascal GP102 GPU. These deliver the best stability and overclocking results under any circumstance. The card is further built in ASUS’s industry-leading Auto-Extreme process which ensures the best quality for graphics cards. Core clocks for this card are set to 1683 MHz base and 1708 MHz boost while the memory runs at 11,100 MHz (+90 MHz). 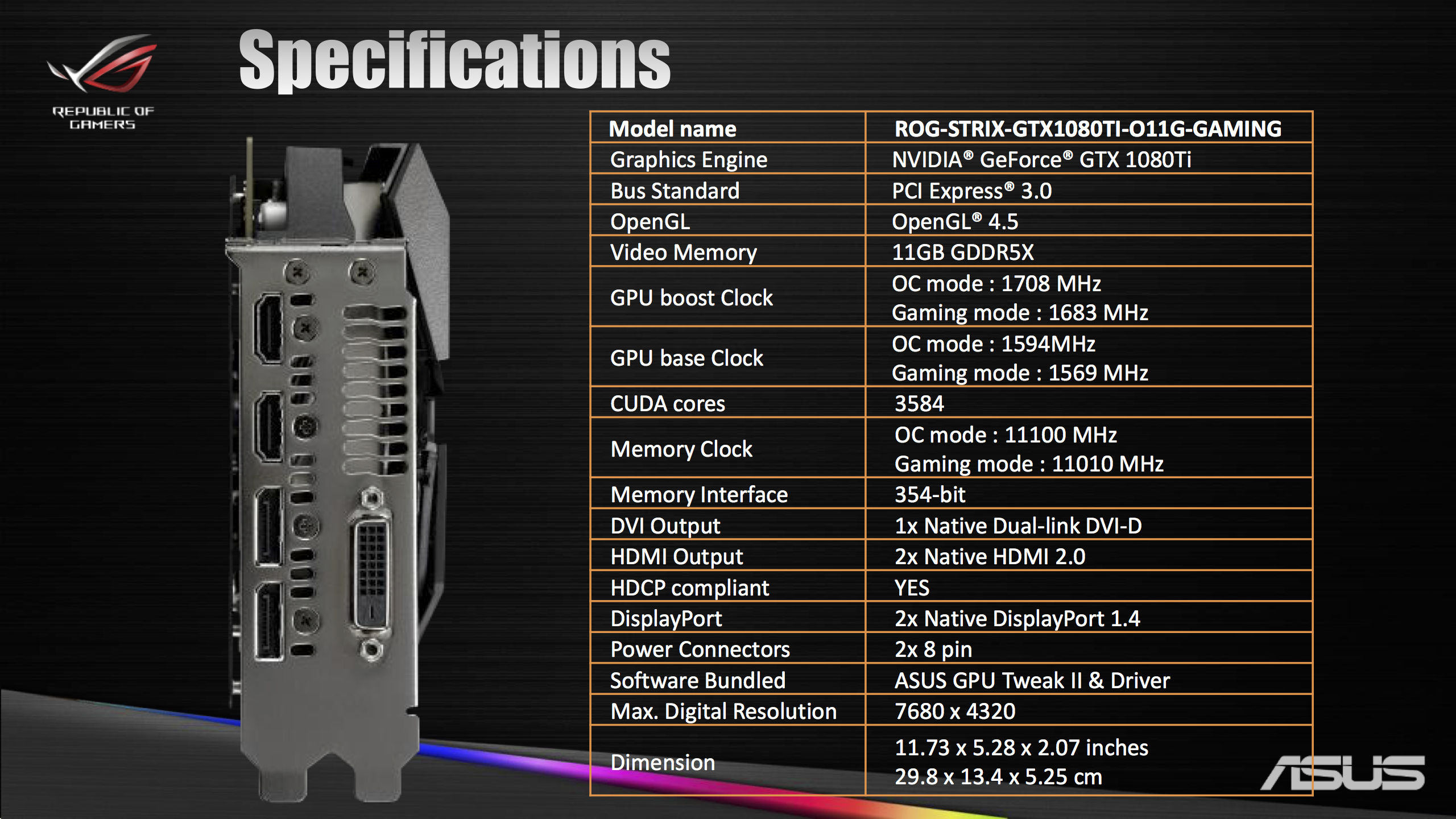 ASUS’s triple slot behemoth comes with ASUS AURA RGB LED support and should feature a custom PCB and a custom backplate. For power input, we are looking at dual 8-pin connectors that provide juice to the solid 10+2 phase PCB design. The ROG STRIX OC will retail at $740 US which is a $40 premium over the reference price.

The iChill series is designed to feature the best cooling performance and this one is no exception. The iChill series heatsink feature a very dense aluminum fin array which has several heatpipes running through the whole block. 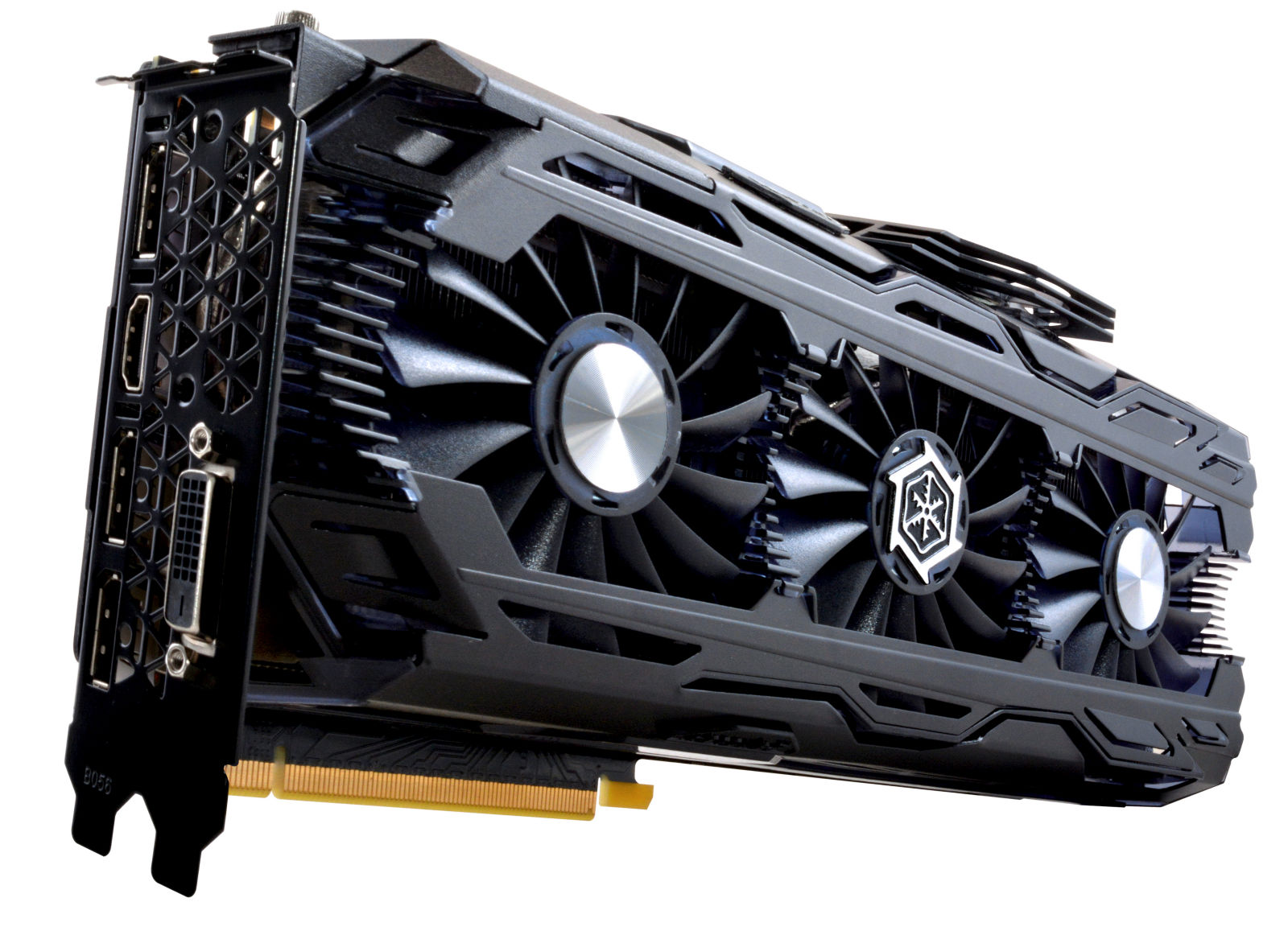 Inno3D GeForce GTX 1080 Ti iChill series cards come in a brushed metallic color scheme. The entire cooler shroud assembly looks great. The Inno3D iChill X3 series cards features clock speeds of 1582 MHz base and 1721 MHz boost with the memory clocked at 11,408 MHz which are impressive clocks for this card and the boost is higher than the STRIX OC model too.

The card features a dual slot design and will be featuring an 8+6 pin power configuration. Surprisingly, Inno3D lists the TDP of the card at 280W which is 30W more than the reference model while it uses the reference PCB design.

Coming to the performance metrics, we can finally say that 4K Gaming is now possible more than ever and at a much cheaper price. The ASUS GeForce GTX 1080 Ti STRIX delivers great performance and can be overclocked beyond 2 GHz with ease and much lower temps than the reference variant, achieving even higher performance gains. When overclocked, the card gains an additional 7.8% of performance and temps remained under 70C.

In TechPowerUp's review, we can see the 1080 TI ROG STRIX cruising past 60 FPS with ease in several AAA titles. This is a very impressive feat and we can expect even higher performance from various AIB models that are supposed to hit higher factory clocks in the next couple of weeks.

Moving on to Hexus's review, we see that the card not only manages to beat the NVIDIA Titan X, but turns out to be almost twice as fast as AMD's Fury X which is a huge leap in performance for users waiting for true 4K performance. They further managed to overclock the card by adding 50 MHz to the core and pushing the memory to 12 GHz without any additional voltage on the reference PCB. This gained even more performance over the stock clocks.

The GeForce GTX 1080 Ti is the fastest card available to gamers and the custom models make it even faster. This is the first time that we are looking at playable 4K performance at a price of $699 US, the same price at which the GTX 1080 sold for almost a year ago. This is impressive and we can expect even more gains from future NVIDIA GPU updates that would bring 4K gaming down to the mainstream gamer audience at lower prices.