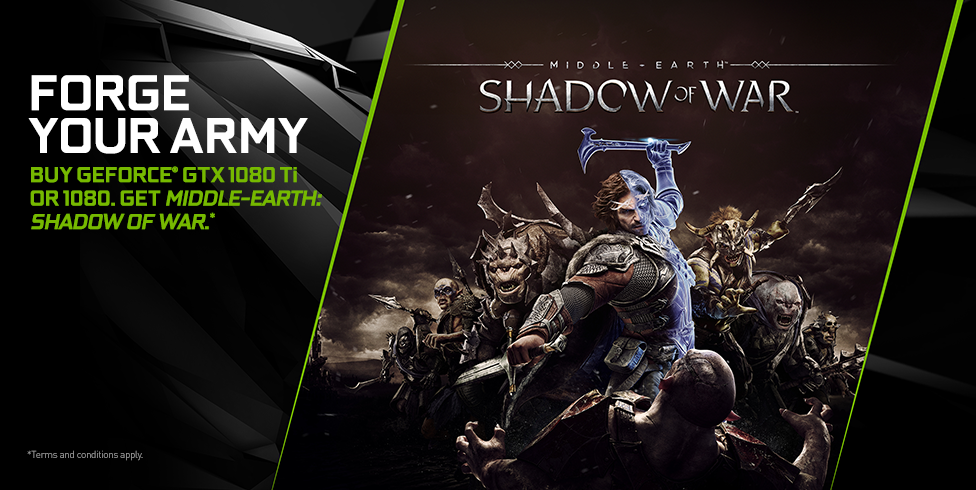 NVIDIA has announced their latest GeForce game bundle for users that plan on purchasing the GTX 1080 and GTX 1080 Ti class graphics cards. The new bundle includes a copy of Middle-Earth: Shadow of War which is launching on 10th October.

The game bundle is valid on all GeForce GTX 1080 and GeForce GTX 1080 Ti cards and will last till 16th of October, 2017. The game bundle was announced two days ago so it is applicable on all of the mentioned cards that were purchased since 26th of September, 2017. All purchases, whether they be of GTX 1080 / GTX 1080 Ti graphics cards, system or notebooks will come with a free copy of the game that will be available on Steam and playable on the official release date.

NVIDIA's GeForce also previously announced that they will be giving away over 50,000 copies of the prequel, Middle-Earth: Shadow of Mordor through GeForce Experience. This was to celebrate their partnership with Warner Bros. The copies would be sent out randomly to everyone who signed in the latest version of the GeForce experience before 25th of September. So you would know if you are one of the lucky ones already.

Aside from that, NVIDIA has also published their target performance guide for GeForce GPUs that will be able to play the new game at 60 FPS on a range of different resolutions and settings. A list of these configurations can be seen below:

You can head over to the following link to redeem your code for a free copy of Middle-Earth: Shadow of War, directly from NVIDIA - https://www.geforce.com/shadow-of-war-bundle