We've already seen plenty of the NVIDIA CMP 30HX with the seizure of 300 stolen cards in Hong Kong, multiple SKUs from different manufacturers, and a few retail listings. The CMP 30HX is yesterday's news as the mining performance of the ASUS CMP 40HX has just leaked by Videocardz.

The CMP 40HX was supposed to launch in the first quarter of 2021, but as with many NVIDIA launches, it has been pushed back and is currently being tested in-house by NVIDIA partners. The CMP 40HX is based on the Turing TU106-100 GPU, and it features 8GB of GDDR6 memory. Over at VideoCardz, they received a screenshot of internal testing at ASUS. Internal testing for these NVIDIA CMP series cards is just in-house mining to test the performance. The source of the screenshot was also the source of the photos of the ASUS CMP 30HX. 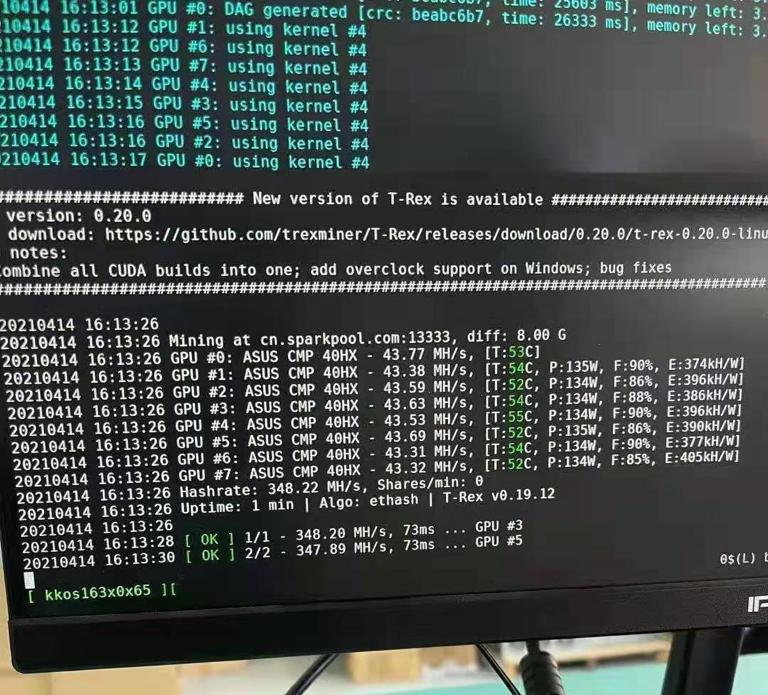 In the screenshot, a cluster of 8 ASUS CMP 40HX is seen mining Ethereum. The best performing card has a hash rate of 43.77 MH/s, and the average hash rate between the 8 cards is 43.5275 MH/s. This indicates a 21% improvement in hash rate over NVIDIA's advertised hash rate of 36 MH/s. The cards are also running at 135W, which is 50W lower than the default TDP of 185W, which greatly increases efficiency all the way up to 400 kH/W. The large increase in performance over the specs shared by NVIDIA is likely due to the combination of memory clock speed increase and power optimization.

The pricing for the ASUS CMP 40HX is expected to be $699, while the price for the ASUS CMP 30HX has been revised and now is $599 down from the original $799. The release date for these cards is currently unknown, which leaves the CMP 30HX as the only NVIDIA CMP series card available to purchase.