NVIDIA AIB partners are silently delivering price cuts to high-end Maxwell based graphics cards to secure their lead over AMD's latest Radeon 300 series cards. Last month, NVIDIA themselves reduced the price of their GTX 980 graphics card from $549 US to $499 but it seems like AIBs are in the mood to further strengthen the price to performance ratio of Maxwell cards to win over a large customer base to the GeForce 900 series. 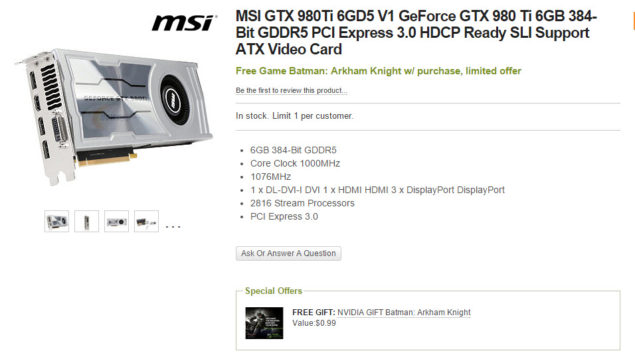 Currently, the GeForce GTX 980 Ti retails for $649 US and is highly competitive against the flagship Radeon R9 Fury X. The GeForce GTX 980 on the other hand is priced at $499 US and the competition it has is the Radeon R9 390X which is priced $70 US lower while the difference between overclocked models is about $50-$30. The Radeon R9 390X has a lead of around -5% - +5% depending on the title being tested even though it does come with 8 GB GDDR5 memory but the large pool does not tend to offer much improvement over its 4 GB Hawaii based predecessor or the 4 GB GeForce GTX 980. The Radeon R9 Fury on the other hand is $50 more expensive than the GeForce GTX 980 but has gains in performance. When comparing similar priced overclocked variants of the GTX 980 that retail for $529 US+, the Maxwell does come close and even faster than the Fiji based card.

While there isn't much need for a price cut on the 980 Ti, an update to the 980 will be a good deal as the card packs a lot of punch and will finally make the 980 a more sensible GM204 offering. But it seems like AIB partner of NVIDIA are going to update pricing on both cards. It seems like the price updates will be issued silently and through both AIBs and retailers over the upcoming weeks. From the looks of it, the GeForce GTX 980 Ti will be getting a new price of $629 US which is $20 lower than the Fury X while overclocked models which are faster than the Titan X will be coming down to $679 US which is just $20 ahead of an Fury X. That is some pretty sick deal for the GM200 based card. Similarly, the GeForce GTX 980 will be getting a new price of $479.99 US versus the $499 US cost.

While still expensive than the Radeon R9 390X, it will close up the gap between overclocked 390X cards and GTX 980 models. The Radeon R9 Fury will be a positioned in a separate market at $549 US and will be making rounds with highly customized and overclocked GTX 980 variants. It should be noted that overclocked R9 Fury models themselves retail at $579 US+ (ASUS STRIX R9 Fury) while overclocked GeForce GTX 980 models such as the Gigabyte G1 Gaming with clock speeds of 1228 MHz are currently priced at $520 US. TechReport's review of the R9 Fury shows that the Gigabyte GTX 980 G1 Gaming has the same amount of performance as the Fiji based offering from AMD and sometimes it evens outperforms it at 4K. All NVIDIA cards are bundled with Batman: Arkham Knight which is a $60 US AAA title to sweeten the deal.