Not Tonight Tasks you to Survive In Post-Brexit Britain

My country is screwed. It has been since the 23rd of June, 2016. That's the day that 72% of the United Kingdom turned out to vote, to either remain within or leave the European Union. I voted, with 16,141,240 other people, to remain. 17,410,742 voted to leave. Tremors from the vote have been felt already. One question that hasn't truly been answered is the effect on European nationals when judgement day finally arrives.

Not Tonight, developed by PanicBarn, seeks to answer this question. Also, the price of the game developed in Britain will be decided by a second vote on Brexit.

In the run up to launch, a Brexit vote will determine the British price of the game. The Not Tonight Discord community is currently voting on a second referendum, deciding whether they want to rejoin the EU after the previous Brexit vote, or stay out of the EU.

If they vote to stay out of the EU, the value of the pound will no doubt plummet again, leading to the game costing more money to British players. All the rules and outcomes of the vote can be found on Discord.

In Not Tonight you assume the control of 'Person of European Heritage #112', living in Relocation Block B. Britain is controlled by a far right government. You have been assigned the role of a bouncer. "Work hard...no trouble...and you might get to stay". It's all sounding very dystopian and interesting.

The game that most comes to mind is Papers, Please. As a bouncer you will man the doors of pubs, clubs, festivals and other venues. In this role you will be tasked to manage guestlists, check ID's & social credit score and any other rules that the particular venue may have. Don't forget to stop us drunken Brits from becoming rowdy, either. 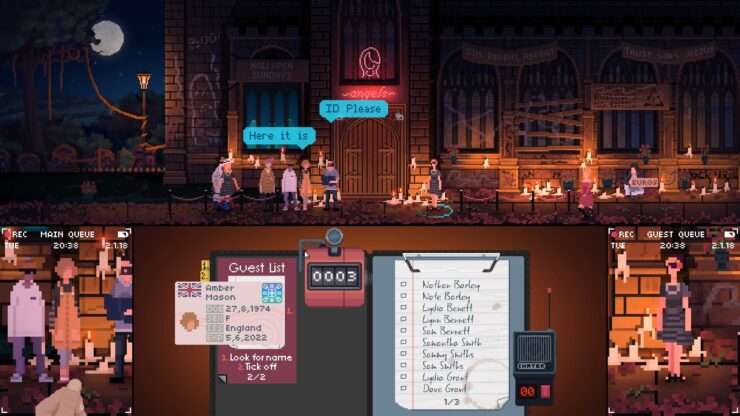 With each job you do, you'll earn money and bonuses if you do particularly well. Use this money to survive. Upgrade your apartment, your equipment and even yourself in an attempt to be a better bouncer for more challenging gigs, climbing your way to the top of your respective ladder. Much like Papers, Please, you'll have moral choice decisions to make. Eventually the question is: "Will you join the resistance and fight the regime -- or keep your head down and hope that one day this will all be a distant memory?"

Not Tonight will be launching on Steam in just two weeks, on the 17th of August. Needless to say, I'm looking forward to the game. I adored Papers, Please. I will be living in post-Brexit Britain and any preparation is useful, although my designation will likely be 'Person of British Heritage #16,141,241'.