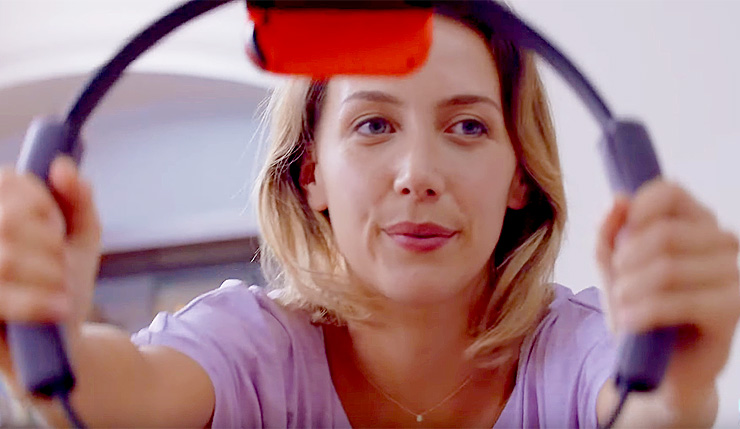 You thought Nintendo was finished with their health kick? Well, surprise! A decade after the release of Wii Fit Plus, The Big N is getting back into the fitness game with a new, uh…thing. Last evening Nintendo dropped a new trailer showing their new creation in action, but have yet to reveal a name or any real details about the device. You can check out the trailer for yourself, below.

So yeah, the new device, whatever it’s going to be called, is basically just a bendable plastic hoop you slide one of your Joy-Con controllers into. This is paired with a little thigh holster for the other Joy-Con. You work out be by bending, twisting, and twirling the hoop, while running in place, kicking your feet, and doing yoga poses. We don’t see it in the trailer, but it’s clear the people using the device are also watching something on screen, so there will be some sort of video/game element to whatever Nintendo has cooked up. Also of note, Nintendo mostly shows groups of people playing with the hoop, implying this new thing might be a combination of workout device and party game.

While Nintendo has delivered plenty of great core gaming experiences on the Switch, they’ve also continued to nurture their quirky side, with stuff like 1-2-Switch and Nintendo Labo. It makes sense to take another stab at the fitness thing, as Wii Fit was a huge success with well over 20 million Balance Boards sold. I’m a little skeptical whether the new plastic hoop will be as successful, but who knows? Nintendo doesn’t have a perfect track record with its wacky inventions, but never count them out.

Nintendo is promising to fully unveil its new thingamabob next Thursday (September 12). What do you think? Are you ready to get physical again?