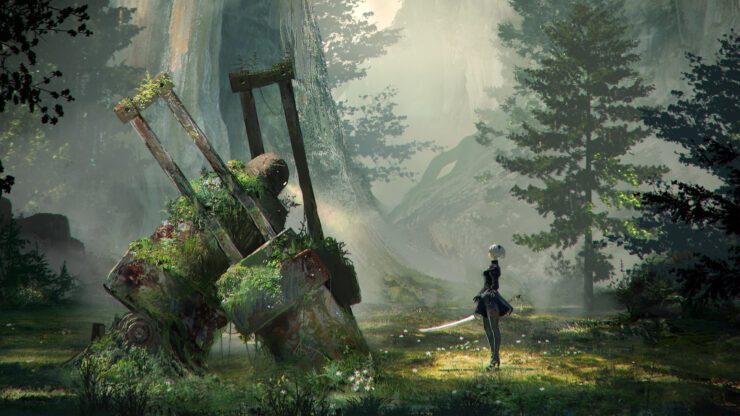 Nier Automata, the action role-playing game currently in development by Square Enix in collaboration with Platinum Games, is one of the most interesting games launching on PC and consoles in Early 2017, and for a good reason, as the combination between Yoko Taro's trademark wacky storytelling and Platinum Games' action games expertise can be truly explosive. We haven't heard that much about the game lately, but something new has managed to emerge online with a new report from a recent event.

In a recent report from a recent Square Enix Experience event posted on Mexico-based website Luisgyg, some new details regarding a never seen before Nier Automata boss battle have been revealed. (Thanks to GameFAQS user Extrain for the translation)

During the event, we saw some new material, which no one had seen. It was a boss fight, a kind of giant machine with a huge mountain to hitting you had to defeat each of their teeth. This boss fight, located near the beginning of the game, so we mentioned, you must prove that you can avoid your enemy, hit in the air and coordinate yourself between fighting with your sword and shoot. It is complicated and exciting, as usual Platinum games, but not impossible to play.

The report's author also mentioned the change of perspective which seems to happen quite often in the game, something that should not surprise fans of the original Nier.

Something interesting in this title is the change in perspective during combat. Thus, there will be three different perspectives that change the way you fight with your enemies: 3D bird's-eye view, and Side-scrolling.

3D perspective is the normal combat games are in 3D - as Bayonetta, while the bird's eye view automatically happens when there are sequences that warrant.

For example, in a boss fight throwing bullets in a pattern, it is only possible to avoid a top-down perspective. The game automatically choose this perspective, making life easier.

The third perspective is Side-scrolling. That is, as if you were in a traditional platformer. Here you do feats of platforming, but also combat something like 2D - but no. It is something that will make combat feel fresh, and decrease the feeling then give games of this type that feels repetitive. In addition, the game itself looks beautiful.

Nier Automata launches in early 2017 on PC and PlayStation 4 in all regions.

Samurai Jack: Battle Through Time Review – Back to the Past (and Future)