NieR: Automata Hands-On Preview – 2B or not 2B? 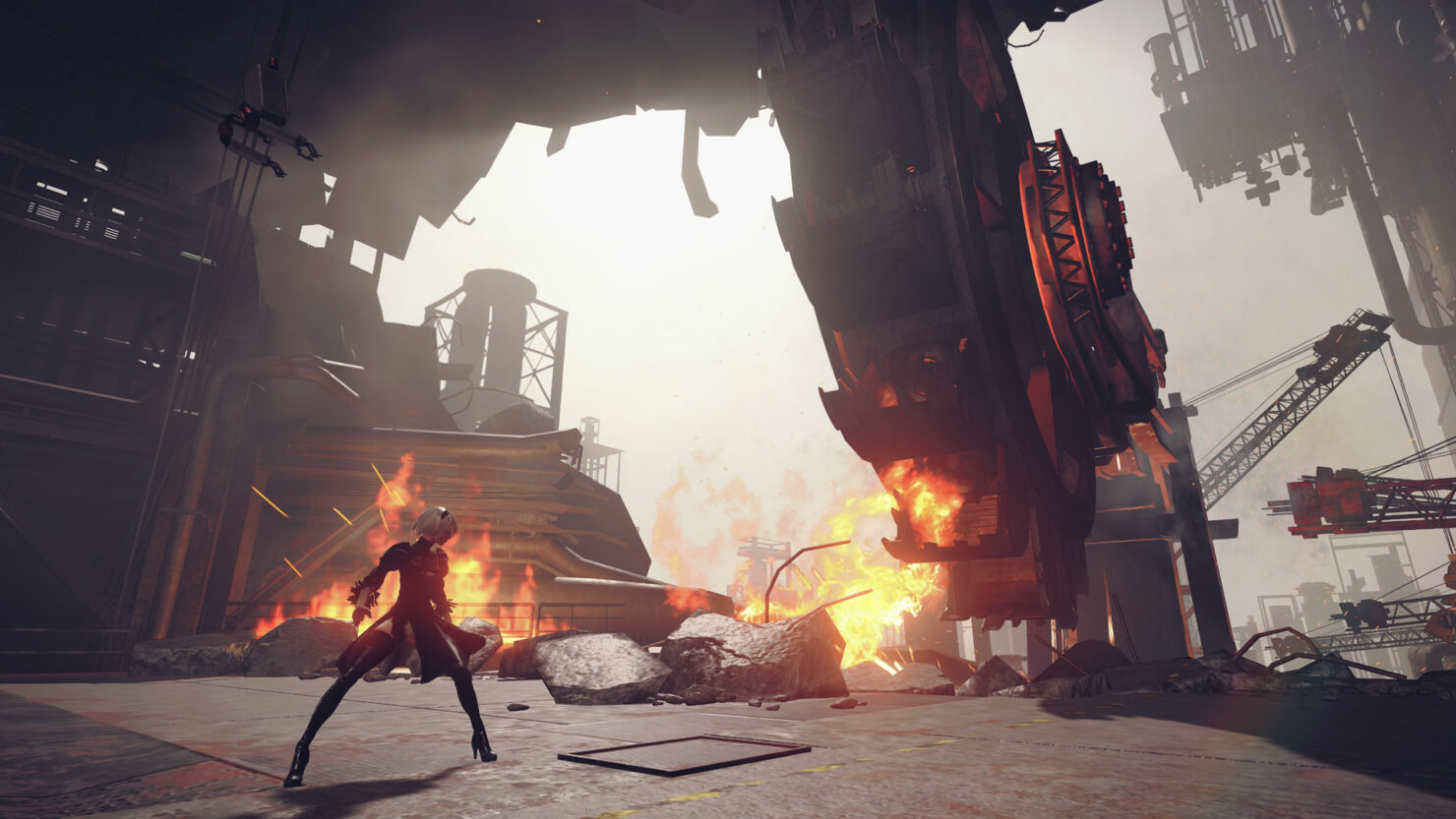 Can you believe that NieR was released seven years ago? Wait, you haven’t even heard of NieR? Well, neither had I until I heard that Platinum were involved in creating its sequel: NieR: Automata. NieR is an action role-playing spin-off of the Drakengard series in which the protagonist (NieR) sets about the seemingly impossible quest of saving his daughter from an incurable disease. NieR: Automata shares a similar post-apocalyptic setting to that of its predecessor, while also retaining the same dark atmosphere of its Drakengard roots. Thankfully, even if you’ve never heard of NieR before, you won’t be at a disadvantage. NieR: Automata is set thousands of years after the ending of the original game, so starting the series at this point won’t make you feel out of the loop. However, if you fell in love with NieR all those years ago, you’ll certainly appreciate the game’s overall aesthetic and will be looking forward to delving into the crazy mind of Taro Yoko again.

So, Platinum have the action covered, Yoko’s got the story under control and by the sounds of it, Keiichi Okabe has returned, dropping an emotional soundtrack to accompany the gameplay. From what I’ve seen of Automata so far, all of this blends together pretty well. Automata’s main protagonist, YoRHa No. 2 Model B, (or ‘2B’ for short) is a female model android best known for her calm nature – and now more widely known for what’s under her skirt. In the gameplay footage below, you’ll notice that she’s accompanied by another android, known as ‘9S, which specializes in reconnaissance. Both are running through a city that has been reclaimed by nature as a result of a war between what’s left of humanity and an army of machines from another world. The YoRHa androids are essentially robots created to fight on behalf of the humans, providing players with some interesting and varied combat. 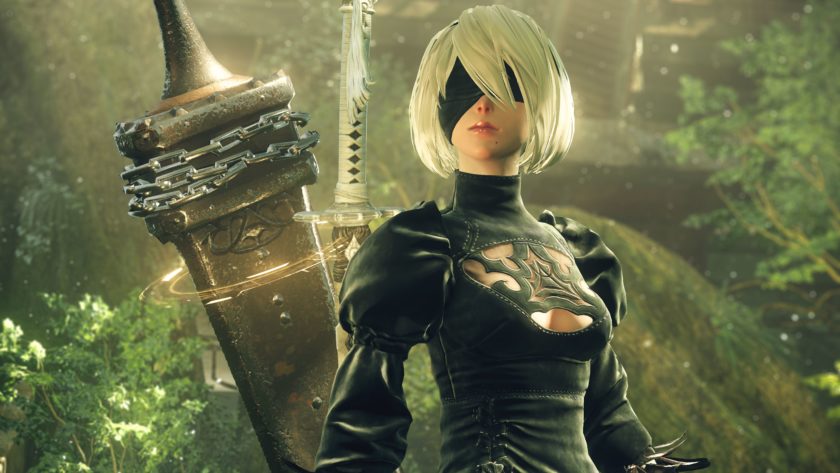 Prior to playing Automata, I wasn’t really sure what to expect with regards to combat. However, once I started playing, I was reminded of Metal Gear Rising: Revengeance; not just in appearance but also in the core mechanics of the combat itself. I’d say that on the surface, Automata’s combat could be likened to a basic version of Revengeance, while employing aspects that I initially felt were similar to Bayonetta. At first, I utilized the drone that flies alongside 2B as a gun, much like how you would use Bayonetta’s pistols however, the game makes a point of teaching you that the drone isn’t a gun at all. Think of it more as an extension of 2B, shooting projectiles that you’d see in a traditional shoot ‘em up title. Surprisingly, the game does a fantastic job of combining these two genres to create something quite unique and unexpected. At certain points in mid-combat, the camera will shift to a different perspective and this completely changes how the game feels. This is probably the most creative way to keep players engaged in what they are doing and the fact that the developer has only chosen to include it on a few occasions, gives us a good indication that the gameplay will be reasonably varied. In the demo alone, you’ll experience classic action, bullet hell and an epic boss battle that has you flying around in a giant robot. It sounds like a crazy mixture of experiences, but they just seem to work really well together.

It’s, therefore, fair to say that Automata integrates a number of advanced mechanics, although what’s odd is that at points, the combat still feels quite basic. You can learn to perfectly time 2B’s dodges to completely avoid taking any damage, yet when playing on the ‘Normal’ difficulty level, I couldn’t help but feel as though everything had been dumbed down. This isn’t necessarily a problem, as Automata offers players four levels of difficulty to choose from so if anything, you could argue that the developer expects players to learn as they play and move onto the harder difficulties. The combat in this game is deep and encourages players to explore it in their own time as they gradually improve, which makes it very friendly towards new players. The game also displays aspects that I haven’t seen before, which will certainly stand out for others that are unfamiliar with the series. 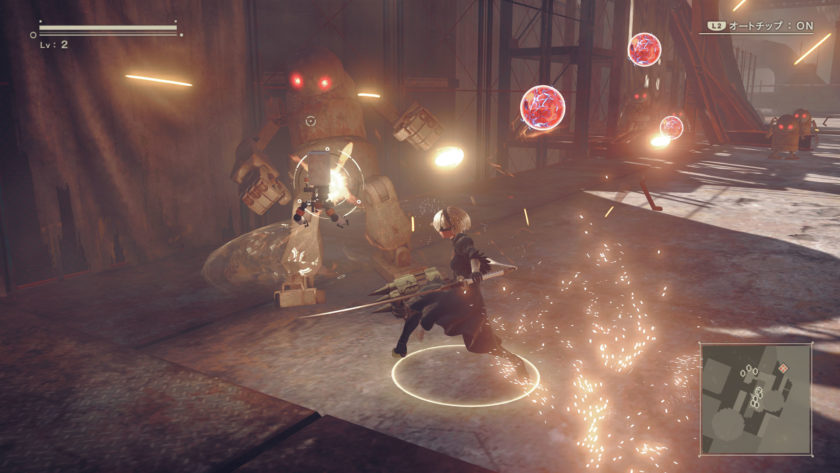 The way in which NieR: Automata approaches death stands out as one of the most memorable features in the game, so far. When you die, your body will remain on the floor until you return to that area. At this point, you’ll then have to decide what to do with the parts you left behind: salvage the components and attempt to struggle through the battle once again or, repair the debris and have it fight alongside you. This is such an interesting way to tackle a problem that all players will encounter at some point, ensuring that support is always an option for those that need it. Dying in battle usually proves to be an inconvenience in other games but rather than punish players for failing, Automata lends players a helping hand, in the form of a clone of yourself.

Overall, I would urge anyone that is even remotely interested in NieR: Automata to try out the demo. The demo exhibits the action-shoot ‘em up mashup really well and I think this unique twist of genres will surprise a lot of people. The preview build that I played consisted of more of the RPG aspects of the game, along with the story elements and I probably didn’t appreciate the story as much as many fans would. For me, the story in Automata is secondary to the strong gameplay and advanced mechanics. I’m completely sold on the game based off the combat alone and with time, I think I would become more interested in the story, as a result. Don’t just take my word for it though, experience it for yourself.

NieR: Automata debuts for PlayStation 4 on March 4th, with a PC release due later this year.