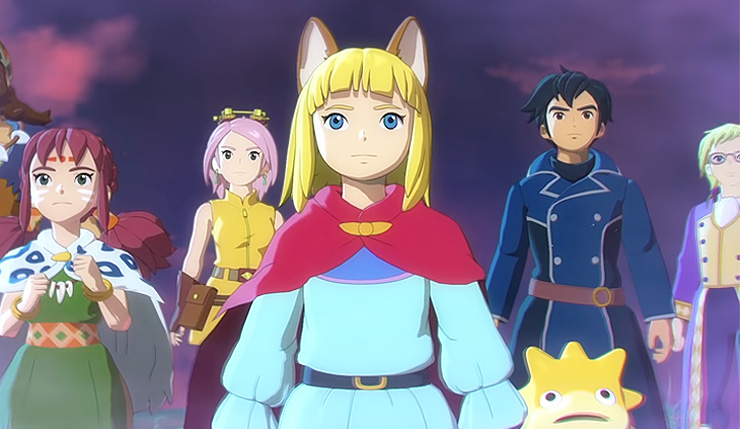 Ni no Kuni II: Revenant Kingdom drops its latest DLC update, The Tale of a Timeless Tome, next week. A few details about this DLC trickled out of Japan a couple weeks back, but now we have a full trailer and official details. Timeless Tome will feature the return of The Conductor, who appeared in the original Ni no Kuni, and some nightmarish enemies to take on. Players can also tackle the Solosseum Slog, a new arena-style challenge. You can check out a trailer for The Tale of a Timeless Tome, below.

The Tale of a Timeless Tome begins with Evan and his friends hearing about a rumor regarding a mysterious rabbit dressed in a tuxedo that is being seen in people’s dreams. Evan decides to investigate by staying at the Goldpaw Inn. When Evan falls asleep, he finds himself in a dream world and encounters the rabbit who tells them he is The Conductor. Who is this off character and what is his objective?

Along with new story elements players will be able to discover new Methods to help customize their style of battle. One of the new methods, “Wizard’s Companion” may sound familiar to Ni no Kuni: Wrath of the White Witch players. Find out what Evan and his friends can do with these new Methods! The Solosseum Slog is a new battle arena that challenges players against strong enemies. Winning will net players new items as a reward!

The Tale of a Timeless Tome is the second update of Ni no Kuni II’s $20 season pass. The update can also be purchased a la carte for $15. Ni no Kuni developer Level-5 have hinted more DLC may be on the way, but this is likely the last update included in the current season pass.

Ni no Kuni II: Revenant Kingdom is available on PC and PS4.