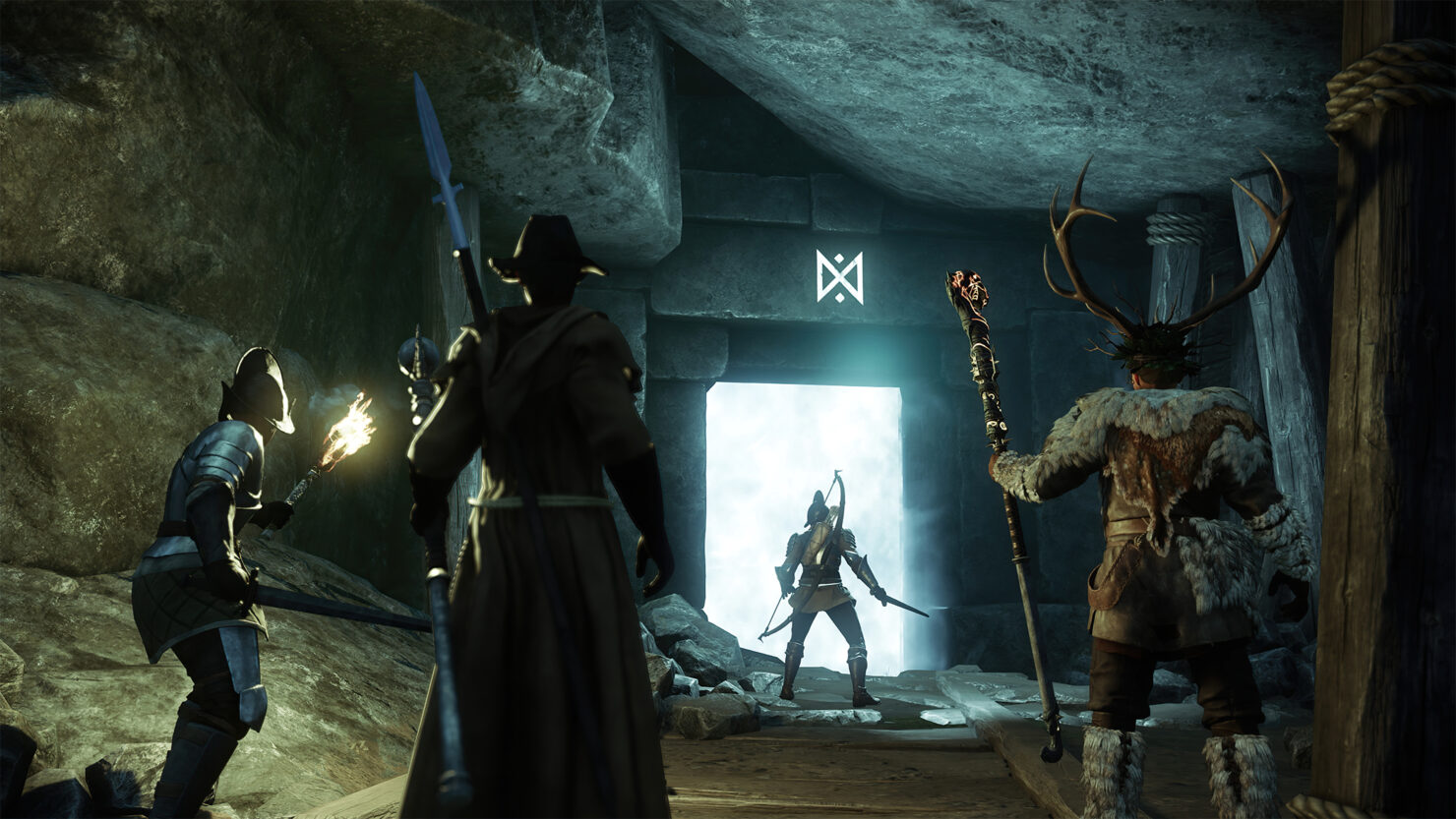 Following several major delays (the game was originally scheduled to launch in May 2020), Amazon's massively multiplayer online roleplaying game New World is now two months away from the Closed Beta due to begin on July 20th and a little over three months from the new release date of August 31st.

Ahead of the looming Closed Beta, we were able to check out one of the biggest additions to the game since the last time we played it: instanced PvE dungeons, called Expeditions in New World.

Whereas the original design focused almost entirely on freeform PvP fights with full loot enabled (which is now gone), over the past year and a half or so the developers have morphed New World into a mix of PvP and PvE, with the latter getting the lion's share of additions. Quest variety has improved, for one thing, and voiceover has been added as well.

But the Expeditions were the focus of this preview event, as mentioned above. More specifically, the first one, where players are asked to investigate the Amrine Excavation, a dig site where a famous archeologist and his crew went mysteriously missing. Needless to say, they had stepped into something they shouldn't have, awakening all sorts of abominations and poltergeists that now roam the halls of the dig site.

Our group was composed of a game developer, who played the dedicated healer, and three DPS characters played by journalists who barely had the time to choose their equipped weapons and put the skill points in place.

While we were a bit over-leveled (the Amrine Excavation will be available at level 25 as the very first of the Expeditions and our premade characters were at level 30), dungeons in New World are ideally tuned for a five-player group, which might explain why we didn't manage to take down the second and final boss.

Overall, the experience was an enjoyable one, though not quite outstanding when compared to other dungeon-like content from existing MMORPGs. It is doubtful that PvE in New World will be able to top the genre's best examples, though Amazon Game Studios' efforts to enhance it over the original scope are commendable anyway; if nothing else, players will have a greater breadth of activities to choose from.

There was a difference, though, in comparison to traditional dungeon content. As you can see in the captured gameplay below, oddly enough, when our group faced the first boss, upon our character's death we were able to simply respawn a short distance away and rush back to the boss fight. That felt a bit cheesy, as most MMORPGs don't allow such an opportunity, requiring that someone from the group takes the time to cast a resurrection spell so that the downed party member may be revived. The same didn't apply for the final boss, though, where running back was prevented through a closed door; we'd prefer that to be the case for all boss fights.

Something else worth noting is that it won't be possible to invite players from the outside after starting Expeditions with a group. Once again, this choice would set New World apart from other MMORPGs where you can simply replace one player with another if need be, though we're not sure if it's for the better.

With regards to combat, we also have to talk about a debatable change. The last time we played New World, the game allowed players to switch on the fly between three equipped weapons. That has been now limited to two weapons. This is comparable to games like Elder Scrolls Online and Guild Wars 2, which enable players to change between two weapon sets in combat. However, there's a difference in that Guild Wars 2 has ten skills per weapon, Elder Scrolls Online has five skills per weapon (plus light and heavy attacks), and New World only has three skills per weapon (plus light and heavy attacks).

Given that some of those skills even come with rather lengthy cooldowns, that seems a bit too low, leading to considerable downtime where you're forced to use only the standard light or heavy attacks, which are inherently the less flashy and interesting attack types. We'd prefer the number of available skills per weapon to be increased to four, at least, if not five.

During our session, we tried the new Ice Gauntlet weapon type. It definitely looks cool (pun totally intended), but it doesn't feel the same way yet when playing. For our set of three active skills, we picked a useful turret that shoots ice shards, a spell that leaves a (short) trail of ice in its wake before exploding at its culminating point, and an ice beam emanating from the character's hands. The latter was particularly disappointing as its range was very limited and it didn't apply any notable crowd-control effect like slowing foes, usually a staple of frost-related abilities.

The Ice Gauntlet's heavy attack also didn't seem to offer any tangible benefits over the quicker light attack, which made it a less preferable choice during this dungeon run.

That may be all part of the balancing and tweaking process, though. After all, the Ice Gauntlet was the latest weapon to be added to New World, and it might feel a lot better when the game ships in late August.

Following the hands-on, we had a group Q&A with the folks at Amazon Game Studios. You can find the full transcript below, featuring Expeditions info and much more.

Do the instanced Expeditions play heavily into the main quest storyline?

A majority of them play into the main storyline, yes. A couple of them are more side stories, though.

Some of them will occur naturally as part of the quests you're on. They'll ask you to investigate, and so on. Others you can find naturally into the world and if you already have the required tools, you can actually go into them.

[Wccftech] How many Expeditions will New World include at launch? How replayable are they going to be?

Our expectation is that the endgame Expeditions can be replayed, the main focus will be getting crafting materials and weapons.

Will the lower level Expeditions scale up to max level or not?

Currently, they're just levelling Expeditions, to satiate players around that level threshold.

Will there be a team search system for Expeditions?

No current plans for team search.

Will there be an easier way to get to the Expeditions through means like teleport, access rune, or portal?

Not currently, but there are fast travel points throughout the world that will make travel easier once discovered.

How do you plan to ensure that one of the three factions doesn't fall behind in PvP?

We're going to start with trying things like better bonuses for those in the faction that's behind, helping them to catch up. We now allow you to change factions.

What we think we're going to see is, if we can make the rewards enough for the faction that's in the third place, people will want to move to that faction. If that's not enough we can look at other things, but for now, we'll let the world control itself, be as sandboxy as possible.

Are you going to add any other weapon types to New World before launch?

What we have now is what will be in at launch, but you can expect more to come in the future, for sure.

Any further plans with PvP?

We have some other adjustments and things coming in for May. We made a pretty big commitment to PvP, our goal is to have both PvP and PvE players not only exist but complement each other. Over time, we're going to continue investing in it.

Which are the available endgame options for New World at release?

Depends on what kind of player you are. I'd say some will dig deep into crafting, we've put a lot of effort into that. I think others are going to try and get the faction gear through PvP. Others still will look to Expeditions and chase that gear. There's also Outpost Rush (a PvPvE battleground type of skirmish).

But the overarching driving force for the PvP players is the Territory Control game. There are already many incentives for people to own territories and we'll continue adding more.

Wars, Invasions, Elite Points of Interests, the Dynamic Events...We've got lots of activities for players to participate in. Then there's having the most decked-out house. You're going to see some notable changes to the housing between now and launch, some big improvements coming there as well.

[Wccftech] Can you speak to the cadence of post-launch updates for New World? Are you targeting bigger but slower updates or the opposite way of quicker but smaller ones?

It's hard to say. Running live and at scale could be very different. We're not committing to either, but we like the way our Alpha has been going. We're really happy with our cadence during Alpha and the amount of content we've put out. Once we get a feel on how it is running live we'll see if we can keep the same cadence or not, we're not sure yet.

[Wccftech] Will New World have gamepad and/or HDR display support on August 31st?

We'll have more information on that as we get closer to launch. These are both things we're working towards but may end up coming after launch.