New Hints That God of War Might Release This Year

Sony Santa Monica hasn't shipped a single PlayStation 4 game so far (with the exception of those made by other studios they helped with), but that will change with the highly anticipated God of War "soft reboot".

The game impressed everyone when a gameplay demo appeared on stage at E3 2016, showcasing truly amazing graphics as well as massive gameplay changes - an over-the-shoulder free camera, RPG elements and crafting resources for Kratos to find.

There's no release date yet, but a trail of hints could suggest an earlier than anticipated launch, perhaps even this year. After all, the game was fully playable even back in December according to Director Cory Barlog.

You might remember that a few days ago a God of War ad was found in Spain for Father's Day and it would be odd to start advertising for a game that's due to launch in 2018.

However, now there's also the fact that the voice actor playing Kratos (Christopher Judge, mainly known to Stargate fans for his work on the sci-fi series) wrote 2017 beside God of War on his official Twitter page. 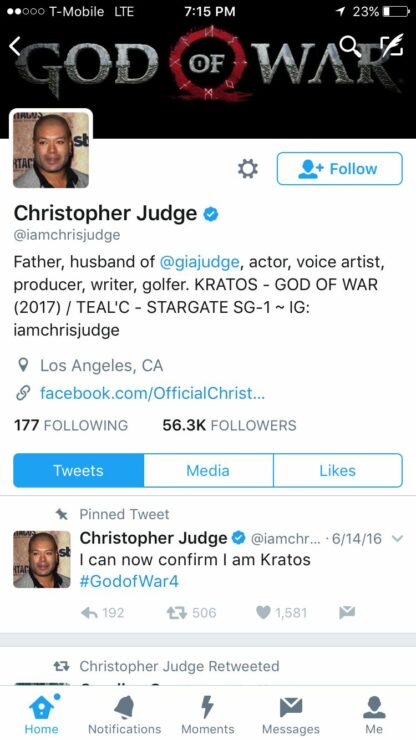 For what it's worth, the Internet Movie Database (IMDB) also points out to a 2017 release. While this is no definitive proof and should be treated as a rumor for now, there's a chance we might get to explore the all-new relationship between Kratos and his son Atreus earlier than we thought.

If that's the case, God of War could release in the Holiday season. We'll know a lot more on the game in less than three months anyway, when Sony Santa Monica could very well showcase another trailer at E3 2017.