The video is part of Ninja Theory’s development diary for their independent AAA title, which will release on both the PS4 and PC, somewhere this year.

In the development video we can discern the game’s main heroin, Senua, walking through smoke, and beam-crossing. Check out the video down below:

Hellblade was initially announced as a PS4 title during Gamescom 2014. However, a PC version was announced in January 2015. Ninja Theory has stated that they are considering to add MOD and 4K support for the PC version.

Tameem Antoniades, Chief Creative Director at Ninja Theory, said: “In Hellblade we are pursuing creative independence in order to explore a compelling subject matter and gaming experience that would not be possible under the current retail model.  In movie terms, this would be a quality independent film, not a Hollywood blockbuster.  Digital self-publishing means that we can offer a smaller, but high quality game at around half the price of retail games.” 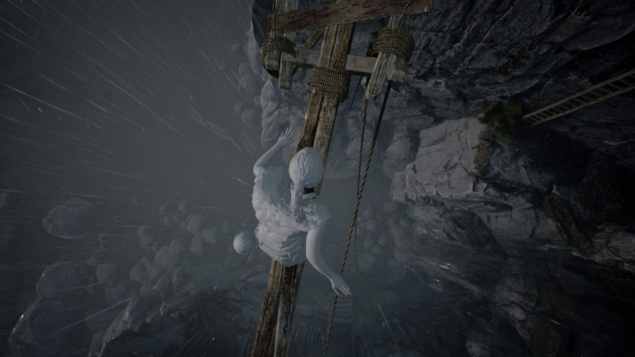 Mental health and psychosis are the key themes explored in Hellblade. Inspired by historical events, Hellblade tells the story of Senua, a Celtic warrior who is left traumatised by a Viking invasion. This third person action game, will follow Senua’s journey into a vision of hell that is the manifestation of her own mental illness.

Developer Ninja Theory is of course known for their PS3 exclusive ‘Heavenly Sword’, which released back in 2007. Although the game’s main protagonist does share some similarities, Hellbade isn’t tied to Heavenly Sword in any way, according Ninja Theory’s product development manager Dominic Matthews.

“No, it’s not,” Matthews said in an interview with Eurogamer. “It’s a brand new IP. Senua is a new character. It’s not tied to Heavenly Sword at all.

An official release date hasn’t been set for Hellblade, but is slated for a release this year.