There's little doubt that Netflix offers exceptional value for money. Or, at least it does if you use it frequently enough. That value for money may very soon be dropping for existing customers.

As reported by CNET, Netflix may be introducing a new top tier of service called Ultra. This new Ultra tier of service would allow up to four devices to receive Ultra HD audio and video concurrently. As it stands, this matches the current Premium level of subscription. 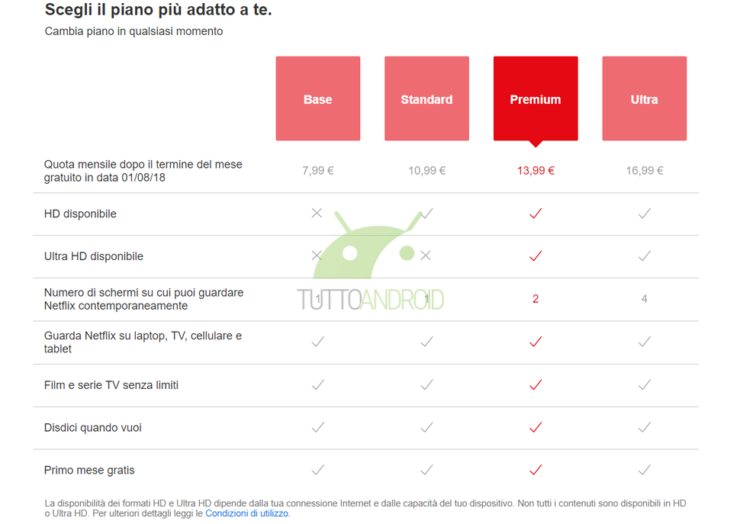 As seen from the image above, taken from the site TuttoAndroid, the pricing of current subscription packages is unlikely to change. One thing to note is the division of HD and Ultra HD, something that isn't made in the current offering of Netflix packages. The website Cordcutting.com has also noticed these changes have been promoted across other European countries.

In an email to CNET, a Netflix spokeswoman has stated

We continuously test new things at Netflix and these tests typically vary in length of time. In this case, we are testing slightly different price points and features to better understand how consumers value Netflix.

Not all Netflix subscribers will see the test and the company may not ever offer the specific price points or features being tested.

This seems to fall into line with the fact there is no material showing a change of price plan here in the UK. In addition, no news has been reported in the US to show a new price point for the service. This doesn't mean that Netflix won't, eventually, roll this out across other markets. It is likely using Europe as a test bed for the new plan, to gauge the response and work on it accordingly.

What are your thoughts on this seeming change of plans from Netflix? Will you be happy paying for the new Ultra tier?