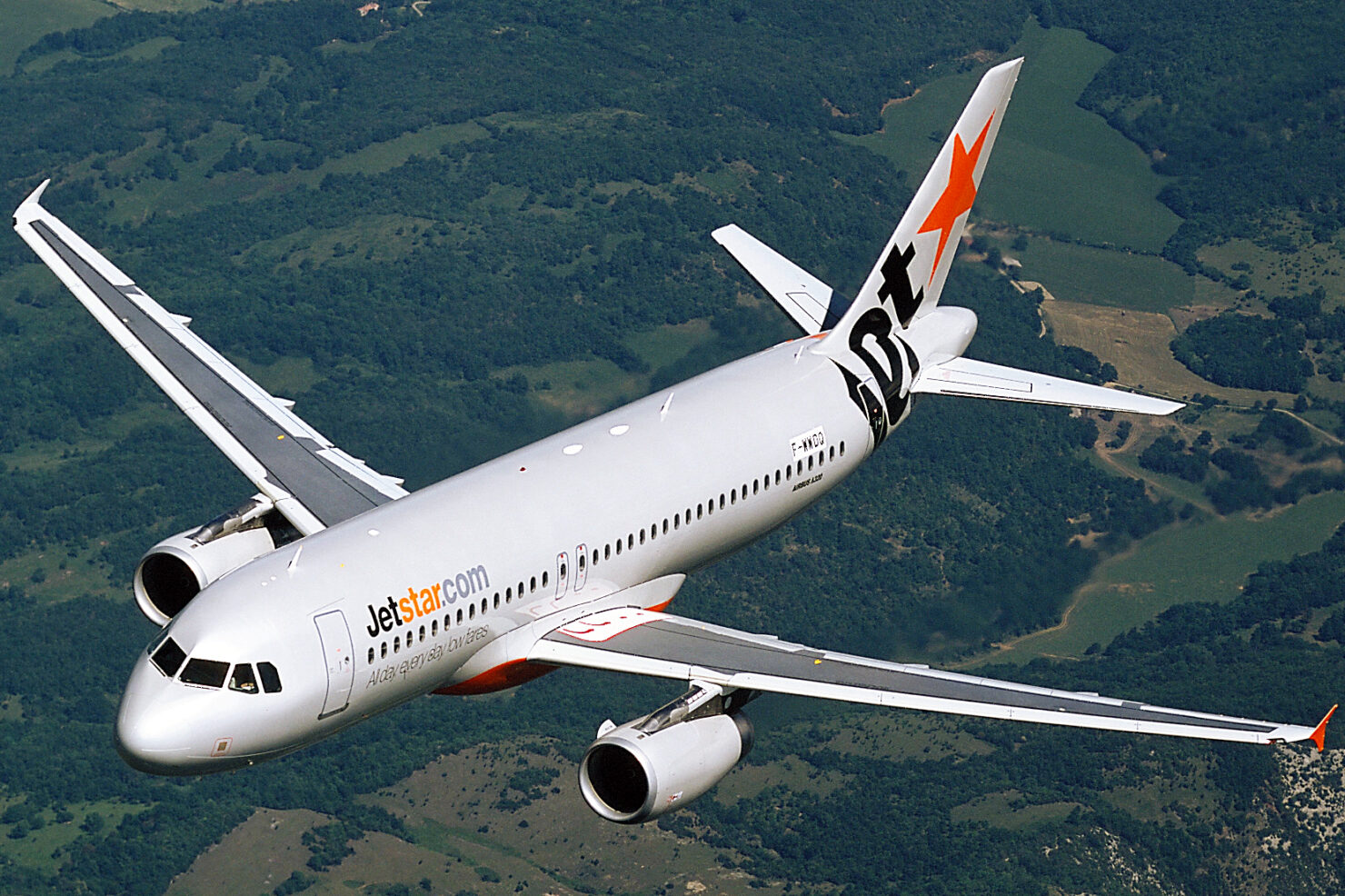 An Airbus A320 has a maximum capacity of 180 passengers, and it's unclear how many Starlink user terminals will be used to provide coverage to the full aircraft according to SpaceX chief Elon Musk. Image: Jetstar

Space Exploration Technologies Corp.'s (SpaceX) Starlink satellite internet service is continuing to develop a new user terminal that will allow its users to gain internet connectivity while on the move. Starlink, which is currently in its beta testing stage, plans to introduce new user terminals in the market through which it aims to bring down manufacturing costs and time, seeking to fulfill the large backlog of orders from customers hoping to gain access to the service.

Now, a new SpaceX filing with the Federal Communications Commission (FCC) reveals that the company aims to test a "mobile user terminal" on an aircraft in Pensacola, Florida. This is the same terminal that popped up in an FCC filing earlier this year, and it features key specification changes over the ones currently being used by the Starlink beta testers.

The filing, made earlier this month, sheds more light on Starlink's plans for mobile user terminals. SpaceX hopes to provide internet connectivity on land, sea and air-based vehicles, and the one that has surfaced today will test the service on aircraft. Additionally, and more importantly, it is different from the variant that Starlink aims to test on the land.

Today's filing reveals for the first time that SpaceX will use a new, smaller terminal for testing Starlink onboard aircraft. The first time that we came across this terminal was in a June FCC filing, in which SpaceX stated that the terminal would be tested on the ground only in five states.

In its application narrative, the company had outlined that:

Like those previously authorized, the tests requested here are designed to demonstrate the ability to transmit to and receive information from a fixed location on the ground. Nothing about these experiments will change the operation of SpaceX spacecraft, which will continue to operate as authorized. 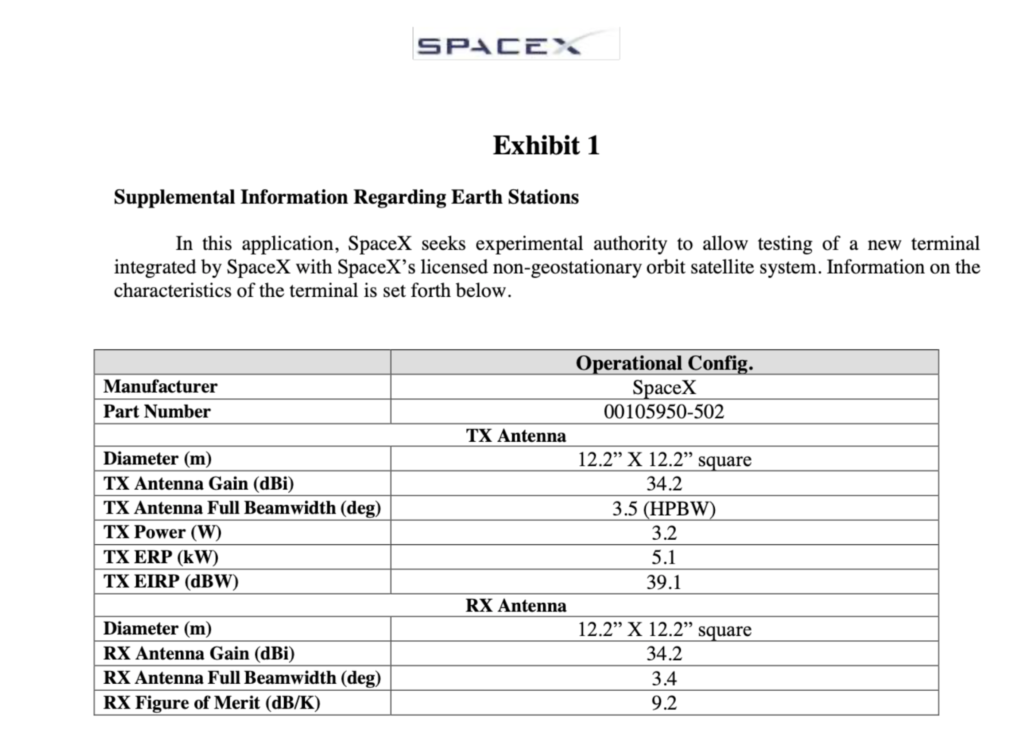 The technical specifications for the Starlink terminal aimed for aircraft tests are similar to those submitted by SpaceX for ground tests earlier this year. Image: FCC File: 1522-EX-ST-2021

Now, in the September filing, SpaceX submits the same user terminal but a changed narrative that outlines that it will now test the dish on an aircraft. As opposed to the previous filing, the recent one also lists down only Pensacola, Florida as the test site, with the company describing the nature of the six-month-long tests as:

Like those previously authorized, the tests requested here are designed to demonstrate the ability to transmit to and receive information from an aircraft. Nothing about these experiments will change the operation of SpaceX spacecraft, which will continue to operate as authorized.

This clears some of the mystery about new Starlink terminals currently being developed by SpaceX. The dish being tested as a "mobile ground-based user terminal" has different specifications, the most notable of which are a larger receiving antenna, Gain and figure of merit. An antenna's Gain is its ability to convert signals into electrical power, and its figure of merit relates to overall efficiency. 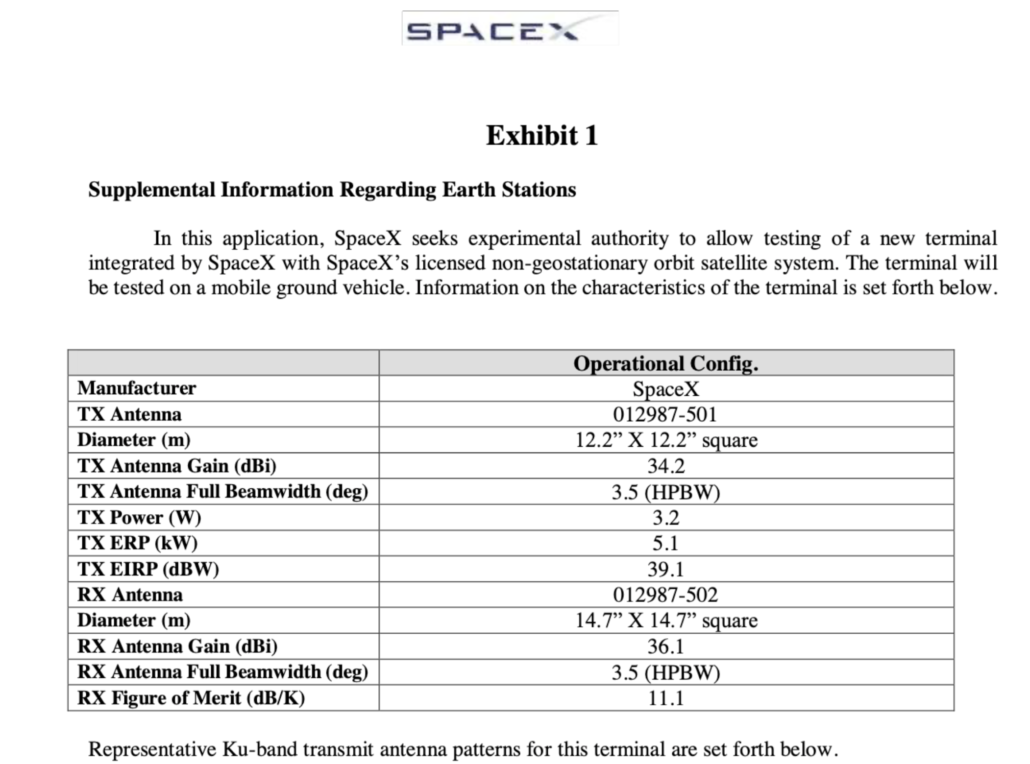 SpaceX has already partnered up with the United States Air Force (USAF) to test Starlink terminals on aircraft. Company executives have also confirmed plans to provide in-flight WiFi capabilities on commercial airlines through the service.

In June, the first details of these plans were shared by SpaceX's vice president of Commerical Sales, Mr. Jonathan Hofeller, when he outlined that his company was already working with airlines to develop Starlink for in-flight WiFi and that several tests had been conducted for the purpose.

SpaceX chief Mr. Elon Musk shared more details later in the month when he stated that the tests were being conducted on a Gulfstream jet (his own?) and that the first two commercial aircraft to use Starlink will be the Boeing 737 and the Airbus A320 due to the large volume of passengers they transport globally.

SpaceX has also sought the FCC's approval to deploy one million new user terminals in the United States, and Starlink's filing for "Earth Stations In Motion" covers both commercial and other use cases. In the case of the former, the terminals will carry a radiation hazard warning and will be installed by technicians approved by Starlink. Musk believes that Starlink should go mobile later this year as it continues to build capacity by launching new satellites.