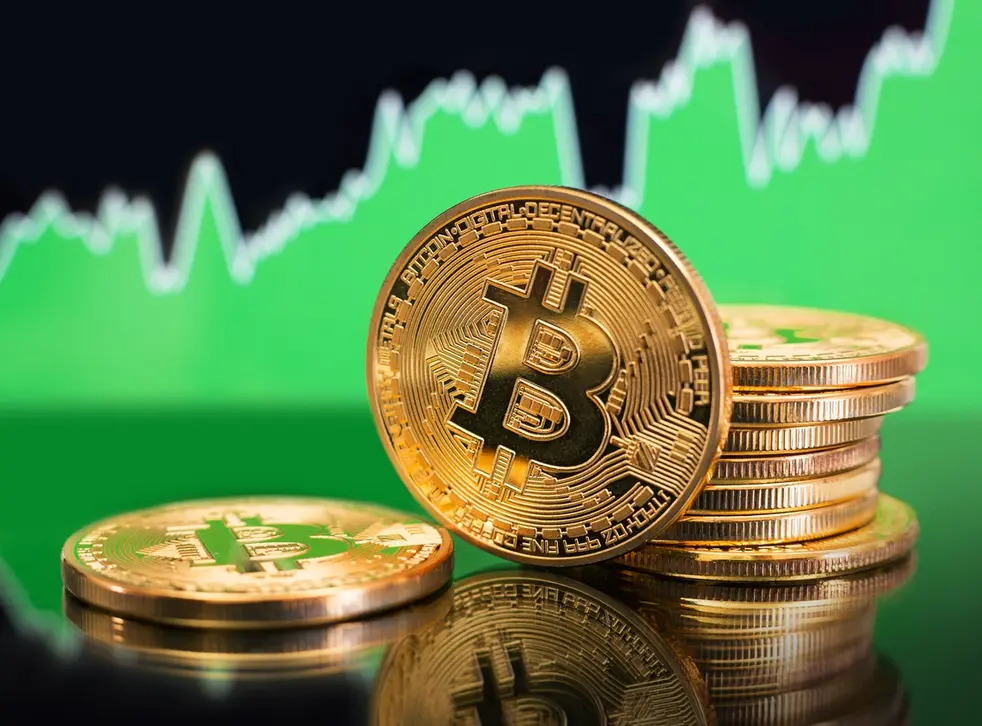 Bitcoin (BTC), the largest cryptocurrency by market capitalization, remains confined in a consolidation pattern within a long-term secular bull market, as the cryptocurrency’s troubling correlation with US equities continues to act as a near-term price dampener.

In this post, we will analyze the price action in Bitcoin from varied perspectives by employing a number of different exchange-based and on-chain metrics. 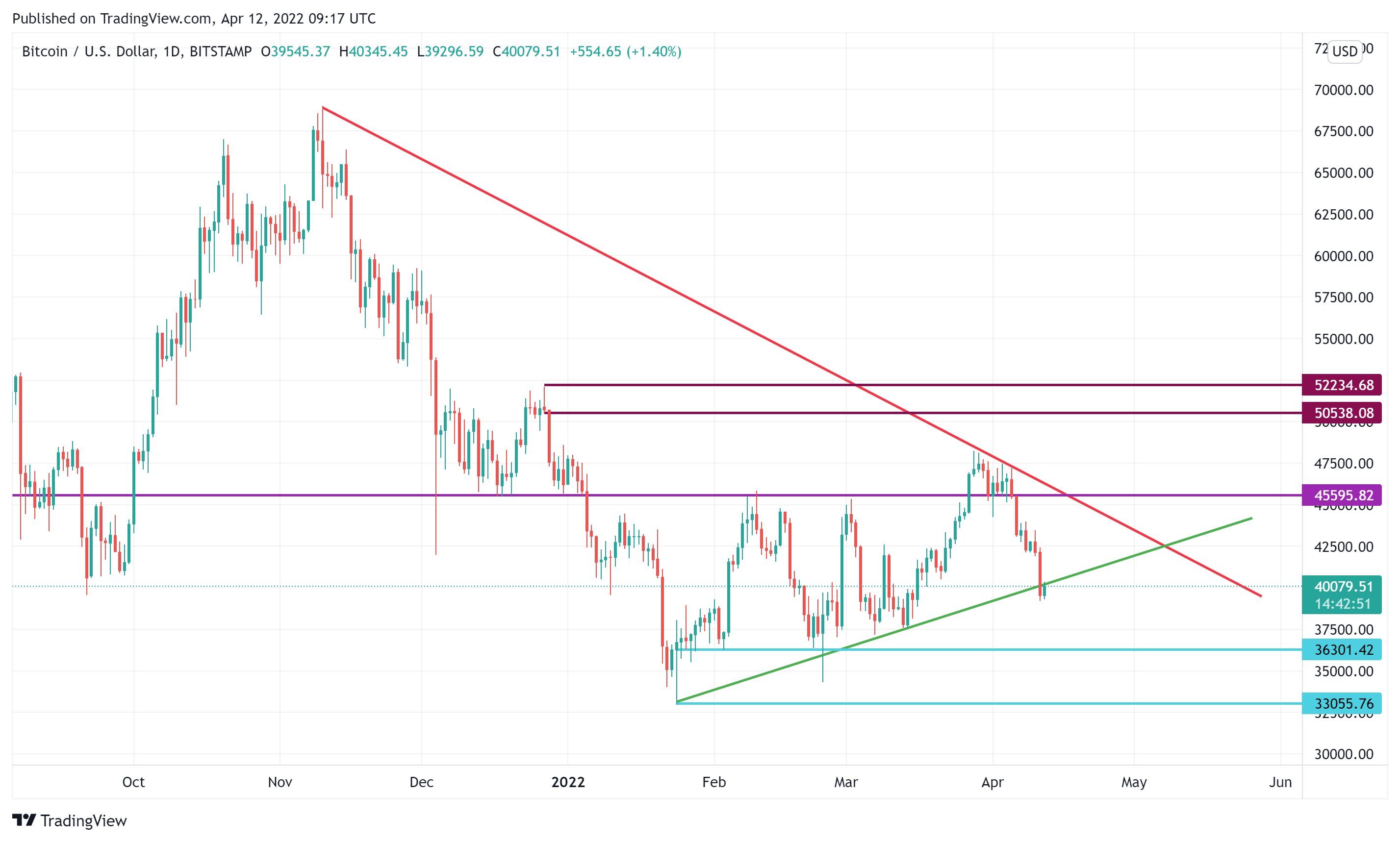 As is evident from the chart above, Bitcoin continues to oscillate in a wide consolidation pattern. The cryptocurrency recently tumbled below a crucial support trendline. If this breach proves definitive, the next major support for Bitcoin will only materialize in the $33,000 - $37,000 price range, as indicated via a cerulean-colored demand zone in the chart above. Crucially, Bitcoin’s resistance trendline from November 2021 continues to hold, suggesting a muted near-term price outlook.

While the number of exchange-held Bitcoins remains muted relative to the local peak seen toward the start of 2022, this metric has started to increase from the 01st of April. To wit, the balance held on exchanges climbed to 2.16 million from 2.14 million toward the start of the month. Bear in mind that an increase in the balance held on exchanges is a bearish indicator as it suggests a movement of coins from cold storage toward liquidity-infused exchanges, where such coins are much more likely to be liquidated.

Of course, this nascent trend has been bolstered by the fact that Bitcoin longs experienced the second-highest liquidation in 2022 on the 11th of April. To wit, long positions worth $146.4 million were liquidated yesterday, exceeded only by $388.41 million in long positions liquidated on the 21st of January 2022. This indicates that a lot of short-term holders of Bitcoin are simply throwing in the proverbial towel.

On the flip side, the Bitcoin long/short ratio on Binance continues to recover from the dip toward the end of March.

An analysis of Bitcoin’s On-Chain Metrics 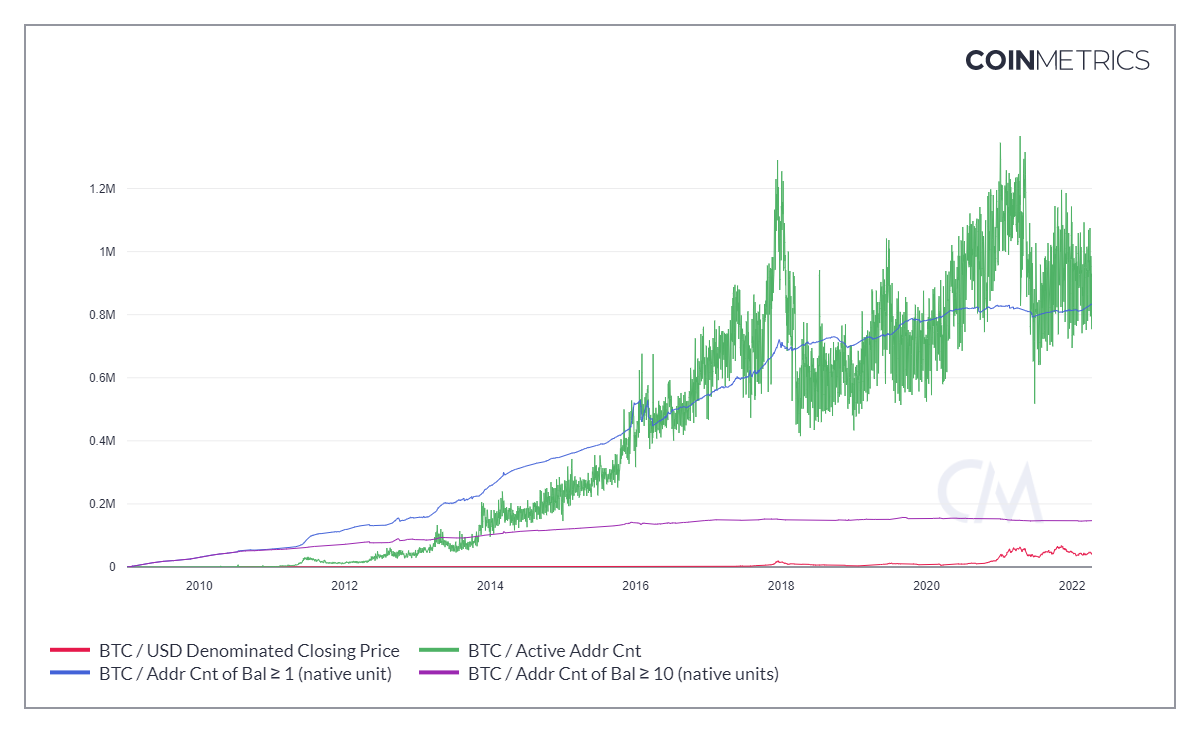 As is evident from the chart above, Bitcoin’s active addresses have declined from a peak of 1.12 million in April 2021 to 0.986 million on the 11th of April. Interestingly, medium-sized investor addresses – those with a balance of between 1 and 10 Bitcoins – have increased by around 22,000 since February 2022. As an illustration, the total number of medium-sized investor addresses stood at 664,039 on the 01st of February. As of the 11th of April, this measure stood at 686,520, corresponding to an increase of 22,481 unique medium-sized Bitcoin addresses.

Looking ahead, Bitcoin’s fear and greed index is back at “extreme fear” from a “neutral” reading last week.

Moreover, a reading of Bitcoin’s active address sentiment indicates a deteriorating trend, with room for further downside. This measure compares the 28-day change in the price of Bitcoin with an equal-period change in active addresses. The current reading suggests that active addresses are declining in tandem with the price. A trend reversal signal only originates when the orange line in the chart above touches the green or the red bound.

Finally, Reserve Risk measures the confidence of long-term holders of Bitcoin relative to the current price of the cryptocurrency. The current reading is approaching support levels bounded in green. This suggests that long-term holders have greater confidence in Bitcoin’s outperformance relative to the current price level. However, there is still room for deeper penetration into the green zone.

Bringing it All Together 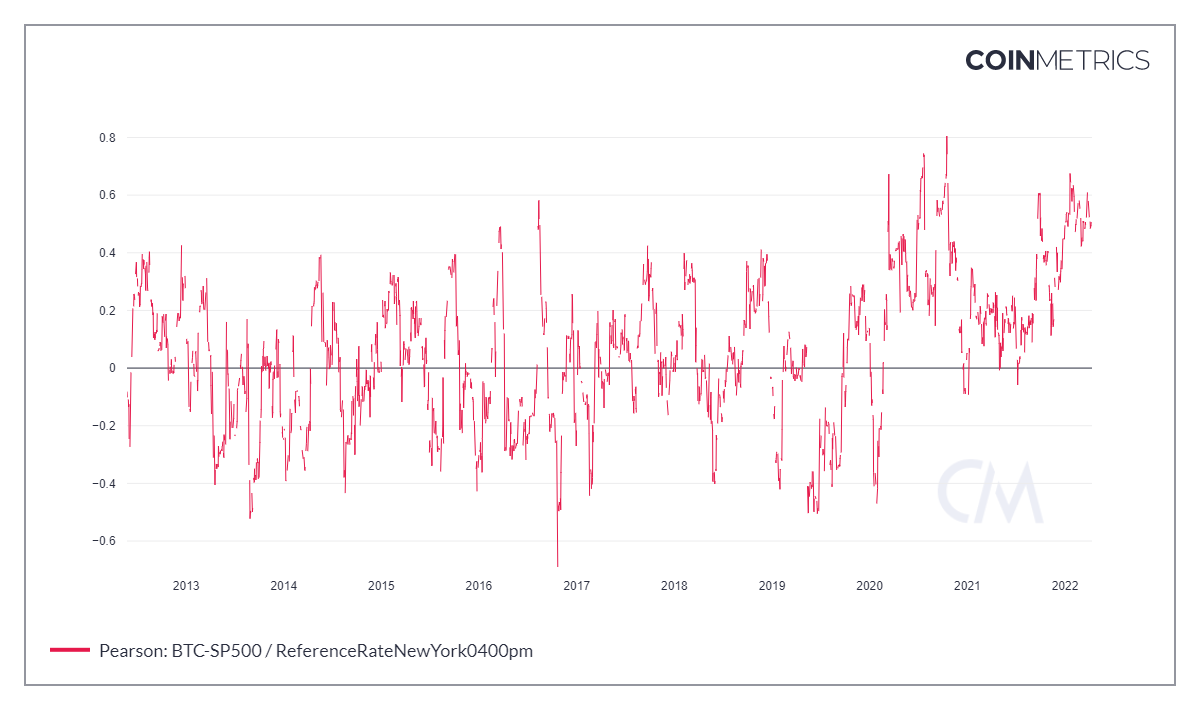 As is evident from the snippet above, Bitcoin currently has a correlation of around 48 percent with the benchmark S&P 500 index, based on a 30-day period. On a 60-day timeframe, this correlation increases to 53 percent. This means that over half of the moves in Bitcoin are currently explained by the corresponding movement in the S&P 500 index.

This is a troubling development and an anathema for a sustained increase in the price of Bitcoin. As we’ve previously noted, the Federal Reserve is adamant about tightening the overall US financial conditions, as encapsulated by the FCI index, as a potent counter to the ongoing inflationary impulse. A key component of this tightening regime entails engineering sustained weakness in equities via aggressive rhetoric around the Fed’s policy rates and balance sheet runoff. As long as this regime persists, equities will not be able to mount a significant bull run, as each bout of outperformance would attract an aggressive policy signal from the Fed. Given Bitcoin’s high correlation regime with US equities in general and high-beta, growth-focused ones in particular, the cryptocurrency’s near-term prospects for a bull run remain limited.

Nonetheless, we do believe that this correlation regime will eventually break down, allowing Bitcoin to resume its secular bull run. In the meantime, the cryptocurrency continues to receive crucial support from diverse quarters. For instance, Terra (LUNA), a public blockchain protocol that powers a number of stablecoins, has already accumulated Bitcoins worth at least $1.6 billion over the past few weeks. Moreover, it plans to buy an additional $1.4 billion worth of Bitcoins in the near future to augment its reserves, which then play an important role in ensuring that the UST stablecoin remains pegged to its $1 price. Similarly, the co-founder of Paypal and Palantir, Peter Thiel, recently made waves when he predicted that the price of Bitcoin would eventually increase by “100x” to over $4 million.

Against this backdrop, we see increased odds of a pullback in the near term as Bitcoin continues to consolidate, creating ammunition for a significant liftoff in the next few months.