The Billionaire Peter Thiel Rocks the Financial World With His Prediction That the Price of Bitcoin (BTC) Will Increase “100x” to Over $4 Million! Bitcoin (BTC), the world's largest cryptocurrency by market capitalization, is poised for astounding gains in the next few years should Peter Thiel's latest prediction pan out.

Speaking at the Bitcoin 2022 summit in Miami, the co-founder of Paypal and Palantir made headlines as he doubled down on his uber bullish outlook for Bitcoin while mocking Warren Buffett, Bill Gates, Larry Fink, and Jamie Dimon.

In his speech, Thiel railed against corporate ESG concerns, terming them the "real enemy".

"[ESG] is just a hate factory. It's a factory for naming enemies, and we should not be allowing them to do that. When you think ESG, you should be thinking Chinese Communist Party."

For context, Bitcoin has continued to receive flak from various quarters, including Tesla's Elon Musk, for its detrimental carbon footprint. As per a recent report by Crypto Carbon Ratings Institute (CCRI), a typical US household consumes 10,600 kWh of electricity per year. Bitcoin, with its vast network of decentralized nodes, consumes an average of 89.78 billion kWh of electricity per year, often exceeding the yearly energy output of entire nations.

Nonetheless, as we noted recently in a dedicated post, this simplistic narrative ignores crucial subtleties. As an illustration, back in September 2020, the University of Cambridge estimated that around 39 percent of Bitcoin's total energy consumption was carbon neutral, hammering the point home that the network's energy consumption is not equal to its carbon footprint. Moreover, proponents also argue that the global banking and finance industry uses energy that is orders of magnitude higher.

In what was inarguably the centerpiece of his address, Thiel noted that Bitcoin was deliberately being undervalued as it is the most honest market in the world, thereby serving as the proverbial canary in the coal mine:

Thiel then observed that Bitcoin's true competitor was not Ethereum but global equities. He correctly noted that one of the primary factors behind the bull market of the past 40 years was the historically low inflation in the post-Volcker era. However, now that inflation has returned, Bitcoin should outperform equities.

We have repeatedly highlighted Bitcoin's soaring correlation with US equities. In fact, currently, around 48 percent of the moves in Bitcoin are accounted for by the corresponding moves in the benchmark S&P 500 index. Back in January 2022, this correlation stood at over 60 percent. 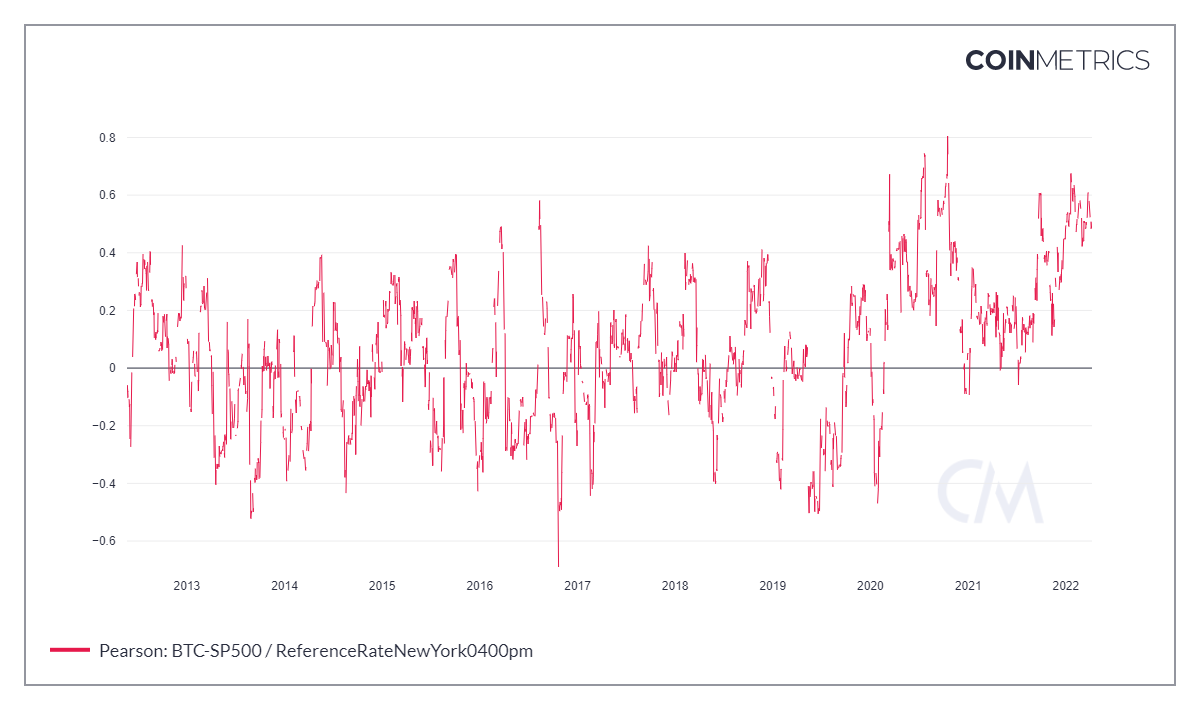 Nonetheless, if Thiel's predictions pan out, Bitcoin will likely exit this troubling correlation regime in the near future, setting the stage for outsized gains.

In fact, Thiel believes that there should be parity between the market capitalization of global equities and that of Bitcoin. For reference, global equities currently have a market cap of around $115 trillion, while this metric for Bitcoin is hovering at $807 billion right now. Thiel then said:

"I am still hopeful that bitcoin goes up by a factor of 100x."

Should this prediction pan out, it would equate to an astounding situation where 1 Bitcoin would be worth over $4 million!

Do you agree with Peter Thiel's assessment? Let us know your thoughts in the comments section below.