The Livestream started off with MSI setting up their test setup for overclocking the Intel Core i9-11900K which includes the MSI Z590 Gaming Carbon Motherboard and an MSI MPG K360 Liquid cooler. The MSI pushed the voltages to 1.36V and the CPU was set to an overclock of around 5.2 GHz. We will talk about the benchmark results obtained by MSI separately but first, let's talk about the key aspects that MSI detailed starting off with some of the package power numbers & overall temperatures.

MSI starts off by showing an Intel Core i9-11900K overclocking behavior chart. The chart shows how the voltages affect the overall package power and temperatures. The Intel Core i9-11900K relies on a 14nm process node so it is expected to get very hot. MSI shows that to hit a 5 GHz all-core overclock, you need around 1.33V and that pushes the package power to 291W & CPU temps to 92C. 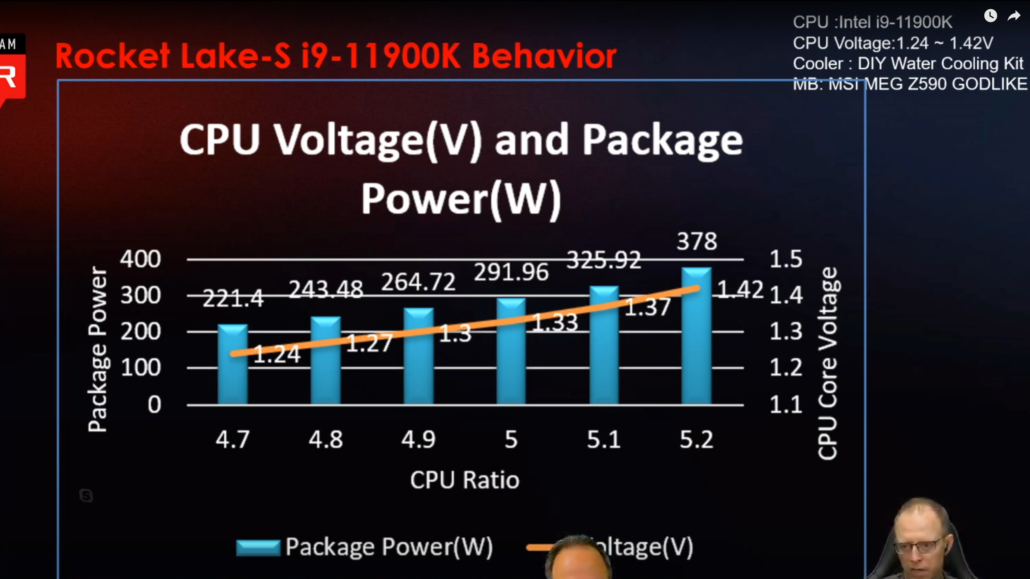 Anything above 5 GHz would result in over 300W package power and over 100C temps. MSI used a DIY Water Cooling Kit to obtain these results. It was stated that while they do not know the exact specifications of the custom cooling kit, it was far superior to a 420mm AIO liquid cooler & just that goes off to show the immensely hot and power-hungry chip the Rocket Lake CPUs are in general. 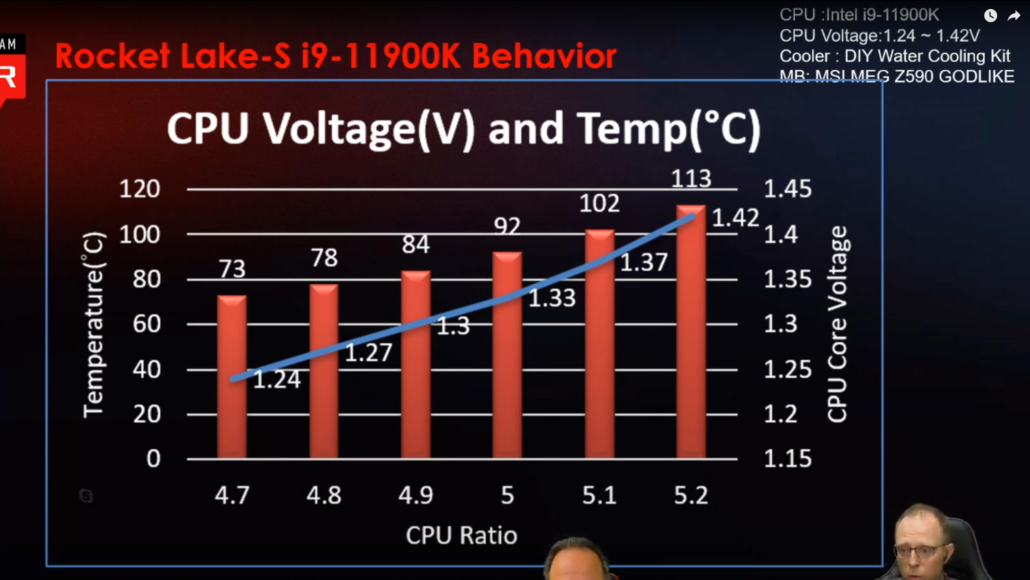 To reach 5.1 GHz on the Intel Core i9-11900K, MSI recommends a voltage of 1.37V which resulted in a package power of 325W and 102C temps. For 5.2 GHz, a voltage of 1.42V was supplied to the CPU that resulted in 378W package power and 113C temps. MSI also provides its own cpu cooler Tuning configurations which let you select from a pre-determined list of power profiles based on your cpu cooler capabilities. 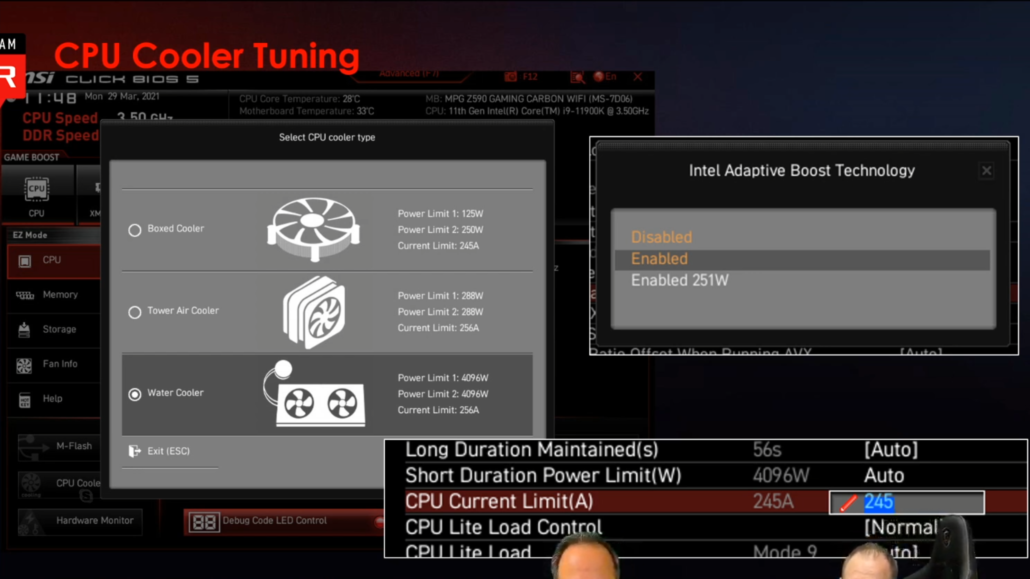 MSI also provides a detailed chart showing the Intel Adaptive Boost Technology working on the Intel Core i9-11900K CPU. We already provided a detailed rundown of how the technology works within our review which you can read here. When enabled, the Adaptive Boost Technology pushes the package power above 300W (at stock / without AVX) and over 350W (at stock / with AVX). That's almost a 100W difference in package power than the default Thermal Velocity Boost technology.

The temperatures and voltages also see a considerable rise with the CPU running at 85C & sipping in 1.452V when running in stock and non-AVX workloads. In AVX workloads, the chip sips in 1.48V and runs at over 114.5C. That's a 25C rise in temperatures compared to the default TVB 3.0 tech.

Hence, there are tuning options on the Z590 motherboards which can let you disable AVX (or just AVX-512) and also configure the Offset range/ratio/voltages & the Voltage guardband scale volume.

Another feature of Intel's Rocket Lake K series Desktop CPUis the Integrated Memory Controller Gear Mode which is similar to AMD's Infinity Fabric and determines a 1:1 or 1/2:1 mode for DDR4 memory. What happens is that when running high-frequency memory, the IMC on Intel CPUs can become very stressed to keep up with the higher frequencies of DDR4 memory as such, the Gear 2 mode kicks in to help relieve some of that stress from the IMC.

The Gear 1 mode runs up to DDR4-3600 (same as AMD) with Gear 2 mode starting with DDR4-3733 and going all the way up to DDR4-5333. The only sacrifice you're making by switching to the Gear 2 mode will be higher latencies but you will retain higher bandwidth. In Gear 2 mode, you can further push your memory overclocks but only using an even-numbered multiplier as odd numbers won't work in this specific model. There are also two base clocks you can set for memory which could be either 100 MHz or 133 MHz. So the max you can hit with Rocket Lake is 8266 MHz with a multiplier of 62x and a memory clock of 100x1.33.

Following are the Gear Modes that MSI says will work on their motherboards using XMP:

MSI B560 Motherboards Support Both Base Clock & DDR4 Memory Overclocking

Lastly, MSI confirmed that its B560 class motherboards will support both base clock overclocking on unlocked and non-K CPUs while also featuring DDR4 memory overclocking. In the slides, MSI shows that its B560 motherboards can support up to 5200-5066 MHz memory speeds which can provide a decent uplift in performance in applications that require higher system bandwidth.

As for overclocking, while B560 won't feature the same tuning options as the Z590 lineup, they do have the base clock overclocking feature which was also featured on its B460 motherboards. The feature essentially raises the PL1 power limit and sets it to the same level as PL2 allowing for much faster performance on Intel Desktop CPUs. MSI shows that it managed to get the Core i9-11900F to deliver better CPU performance than the Core i9-11900K with a base clock overclock from 100 MHz to 102.8 MHz.