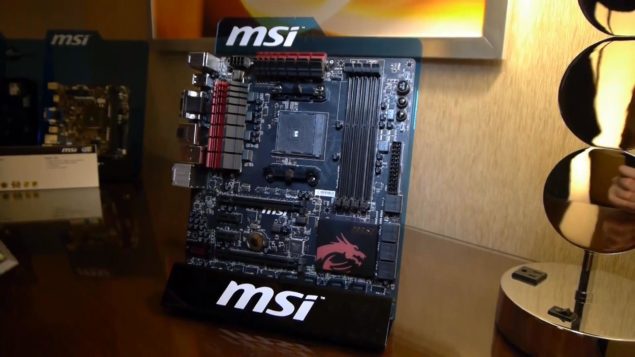 Images are courtesy of PCPerspective!

The MSI A88XM Gaming features the FM2+ socket and A88X chipset which will support Kaveri, Richland and Trinity generation of accelerated processing units. The motherboard sticks with the Dragoon style design with black and red color scheme which looks attractive. The motherboard comes with an extremely high quality PCB design which incorporates the Military Class IV components such as High C-Cap, Dark Cap and Super Ferrite Chokes to enable the most stable working and gaming experience.

The board is powered by a 24-Pin ATX connector while the socket is supplied power through the 8-Pin connector slot. The power area and VRMs are cooled with two heatsinks interconnected with heatpipe to direct heat off the board. A third heatsink is placed on the A88X chipset which features an embedded Dragoon logo. There are four DDR3 memory slots on the board capable of supporting upto 32 GB memory with frequency of upto 2400 MHz (OC) while expansion slots include two PCI-E 3.0 x16 and two PCI-E 3.0 x1 slots.

Expansion ports includes eight SATA 6 GB/s ports while connectors include 6 USB 3.0 and 6 USB 2.0 ports. Talking about gaming in specific, the board comes with some useful tools for gamers such as Killer Ethernet, MSI's Audio boost technology, OC Genie 4 and USB Audio power.The board has a 7.1 Channel audio jack and DVI/VGA/HDMI for display connectivity.

The second board is the ITX form factor A88X chipset based MSI A88XI which comes with a 5 Phase VRMa and is powered through a 4-Pin connector. It comes with an add-on WiFi B/G/N 802.11 chip, has four SATA 6 GB/s ports, a PCI-E 3.0 x16 expansion slot and two DDR3 slots to support 16 GB of memory with speeds of 2400 MHz (OC). It comes with Kaveri, Richland and Trinity support and includes functionality for AMD dual graphics.