Update: It would appear that someone somewhere, thought it would be a pretty swell idea to do typing practice with the box art; because there is more than one count of typos present.

The first official specifications of AMD's or should we say MSI's upcoming Radeon 300 series lineup has been leaked by TecMundo and the cards can now be officially confirmed as rebrands based on existing GPU cores. The lineup which consists of 7 graphics cards ranges from the Twin Frozr V and Armor 2X cooling based R9, R7 Gaming cards and the regular overclocked cards. 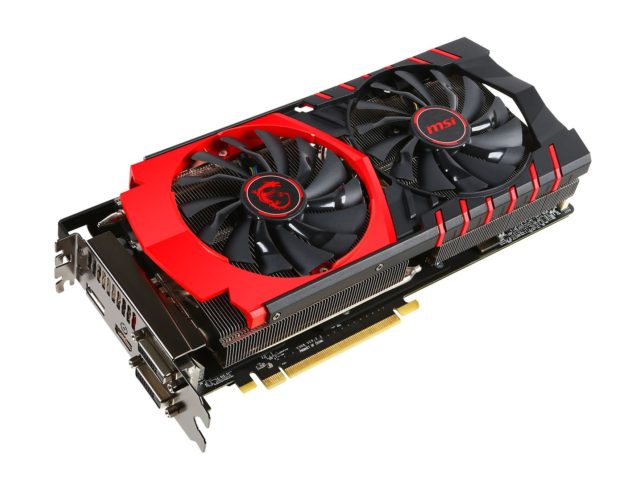 All of the chips that are featured in the new Radeon 300 series lineup make use of new naming schemes for existing GPUs. For instance, the Radeon R9 390X is based on the Grenada XT (Hawaii XT) core that has 2816 stream processors, 176 TMUs and 64 ROPs. The card packs a clock speed of 1100 MHz on the MSI's Gaming model and has the 8 GB GDDR5 VRAM clocked at 6100 MHz that runs across a 512-bit wide I/O interface. The chip has a 208W TDP which could possibly be a mistake since Hawaii has a TDP range of around 280W and MSI also listed the same TDP for the reference Hawaii cards (290X) during launch which turned out to be a marketing mistake. The Radeon R9 380 on the other hand is based on the Grenada Pro (Hawaii Pro) GPU with 2560 stream processors.

Next up, we have two Antigua (Tonga Pro) based cards which feature 1792 stream processors, 112 TMUs and 32 ROPs. Featuring a better architectural design over Hawaii, the chip comes at a clock speed of 1000 MHz core and has the memory clocked at 5.7 GHz for the 4 GB and 5.5 GHz for the 2 GB variant. The TDP of the core is listed at 150W and the memory operates along a 256-bit wide memory interface. The card comes in the Twin Frozr V based Gaming variant and a Thermal Armor 2 X based cheaper variant that has enough cooling performance to keep the Tonga chip cool and comes with Dual-DVI, HDMI and Display port connectors.

The next model is the Pitcairn XT based Radeon R7 370 graphics card which has 1280 stream processors, 80 TMUs and 32 ROPs. Based on the same design as the HD 7870, the chip has a 4 GB model that comes with a clock speed of 1070 MHz and 2 GB model with 1050 MHz. The cards have the memory operating along a 256-bit wide bus interface and feature the Twin Frozr V Gaming cooler that has two copper heat pipes cooling the internals of the GPU. The Display connectivity includes Dual-DVI, HDMI and a single DP. The TDP is listed around 150W which is the same as Antigua and is due to the older architecture GCN 1.0 design.

Last up is the Radeon R7 360 which is based on the Bonaire Pro core with 768 stream processors that is rebadged to Tobago. The chip is clocked at 1100 MHz while the 2 GB GDDR5 VRAM comes clocked at 6.5 GHz across a 128-bit bus interface. We should see a Display Port, HDMI and DVI-I connector on this card with a low TDP of just 83W. Additional specifications and prices of reference models (MSRP) can be found in the table below along with the first unboxing video of the XFX based R9 390X which was leaked a while ago and spotted on retail yesterday: