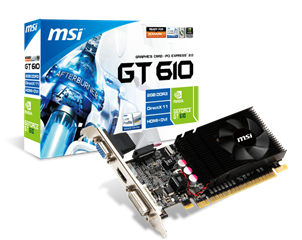 MSI, a world leader in terms of computer related products and hardware has just announced the availability of a new addition to the Nvidia 600 series graphics card with the MSI GT 610 low profile graphics card.

The MSI GeForce GT 610 is based on the GF119 chip (Fermi chip) with 48 CUDA cores. The core clock is set at 810 MHz while the memory clock is set at 1000 MHz. There will be two variants available of the card that vary in memory size having either 1 or 2GB of GDDR3 memory across a 64 bit interface. The card features solid state capacitors all around with a lifespan of a guaranteed 10 years.

In terms of display, the card has an HDMI, VGA and DVI-I output. The TDP has been rated at 32W with the accessories being bundled along are a Driver's CD, Installation Manual and as well as an installation guide. However, a low profile bracket is optional and will be sold separately.

A free video capture will also be bundled along known as Predator along with MSI's Afterburner overclocking tool. This graphics card is HTPC ready and is immediately available on retail stores online.