After top GPU manufacturers MSI and ASUS shipped out review units that were running higher clock speeds than their retail unit counterparts, the former decided to step in and provide its own statement in order to let the dust settle once and for all. Here are all the details that the company has stated.

The company has resorted to defend itself by saying that its review samples and retail cards are identical when its hardware and performance are the core subject and both unit categories also possess the same performance profiles available through the MSI Gaming App. So why did the company decide to ship out review units that feature slightly higher clock speeds than their retail units? Naturally, after this caught the attention of PC enthusiasts, they must obviously have been livid, seeing as how reviewers can have all the fun by gaining a slightly better overclocking headroom than these retail units.

MSI has stated that all units that are shipped out to retail outlets are set to ‘Gaming Mode’ by default, which according to the Taiwanese firm, delivers the best possible performance in terms of power consumed, while offering nearly the same level of performance when compared to the company’s GPUs set in ‘OC Mode’. In short, MSI’s line up of GPUs running at the ‘Gaming Mode’ are functioning at a slightly lower clock speeds than those running in ‘OC Mode’. 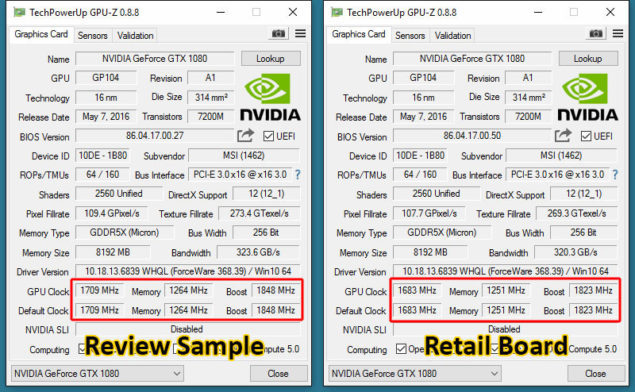 Both the GeForce GTX 1080 and GTX 1070 GAMING X graphics cards were set at ‘OC Mode’ prior to being shipped out to reviewers in order to provide convenience to reviewers, who naturally start to put in a lot of effort carrying out a myriad number of benchmarks and power consumption metrics in order to draw up an impartial verdict of the product based on its pricing. In order to facilitate gamers who do not want to use the MSI Gaming App but want to enjoy future gaming titles with the company’s ‘OC Mode’ by default, the company has provided an alternative vBIOS with ‘OC Mode’ enabled by default and with the links given below.

It goes without saying that if MSI and ASUS want to avoid such another firestorm like this in the near future, it is highly recommended that they also provide consumers with the same convenience that they provide reviewers with. What are your thoughts on the matter? Is MSI giving reviewers unnecessary perks over the regular consumer? Let us know what you think right away.