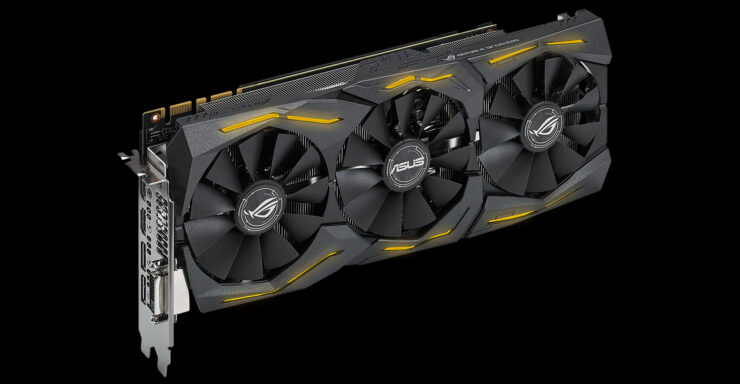 Update: ASUS and MSI contacts have responded to the accusation against them and stated that the reason for shipping higher clock speeds on review units compared to retail variants is because the OC / Gaming BIOS are already enabled for the convenience of reviewers. These BIOS profiles are usually stored in most modern cards and can easily be enabled by a user.

It seems like hardware vendors have been caught performing some dirty marketing tactics with their products. Reports from hardware.fr and techpowerup show that MSI and ASUS have been shipping review units with a higher clock speeds than the advertised clock speeds for retail units. This action leads to performance figures that are not representative of the actual retail products.

Both ASUS and MSI who are the biggest hardware vendors in the industry have been caught shipping samples that are clocked higher than the advertised specs. This means that all the units that were sent to reviewers do not represent the performance you would be getting from the same products that are available on retail. This tactic leverages both ASUS's and MSI's position in reviews as it shows their cards performing much better than reference and custom variants from other competitors which are being compared. 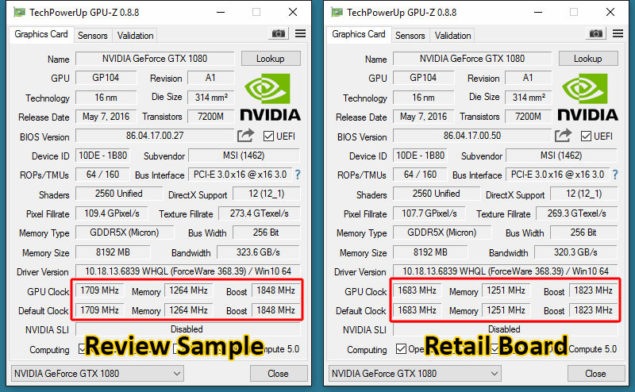 While the clock speeds shown aren't a big boost over the advertised specs, they do lead to better performance figures than competitor cards. For example, an ASUS card with the boosted clock speeds will perform better than an EVGA card which is clocked around the same figures hence showing the ASUS model has a better card. This will boost ASUS sales in comparison to other hardware vendors who are also selling custom boards. Such tactics won't only lead a vendor to leverage their sales but also prompt other vendors to perform such actions which will lead to incorrect performance representation of graphics cards in gaming applications.

Here's what the editors from tech sites have to say:

Obviously, Asus and MSI have made the calculation that getting these small gains brought more benefits than criticism among some troublemakers. Sure, after all, so these bios boost perhaps the performance of the cards by 1%, but that’s no reason to look elsewhere! After 1%, it will be what? 2%? Then 3%? Then widespread cheating contest?

The cards TechPowerUp has been receiving run at a higher software-defined clock speed profile than what consumers get out of the box. Consumers have access to the higher clock speed profile, too, but only if they install a custom app by the companies, and enable that profile. This, we feel, is not 100% representative of retail cards, and is questionable tactics by the two companies.

As you can note, Damien from hardware.fr has a very valid question to such vendors on boosting frequencies on cards sent to reviewers. While "Gaming" and "Overclock" profiles have existed in open for both reviewers and consumers to use on their products, these special clock speeds are configured within the BIOS of cards sent to reviewers.

Techpowerup also came into action and returned with their own findings on such tactics. According to them, MSI has been performing such tactics since the Kepler GeForce 700 and GCN Radeon 200 series cards. ASUS is basically just copying MSI and have started boosting their cards specs to make reviews of their card look better against competing vendors. 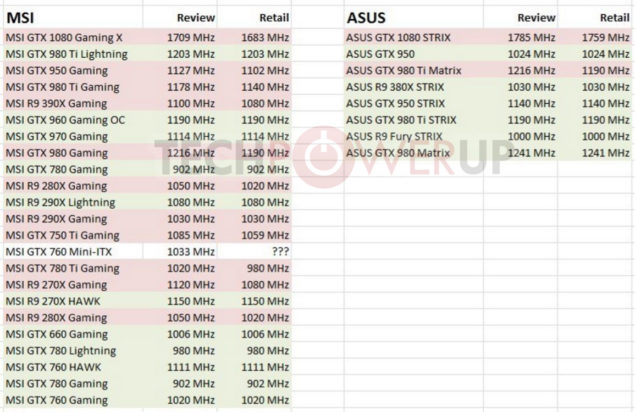 The reason we believe due to which this is happening is that both ASUS and MSI are major vendors across multiple regions. They have various teams for each region who handle press, review units and marketing. Each marketing team makes their own decisions to compete against other vendors in their respective region. Not long ago, ASUS started selling Z97 motherboards by breaking their NDA with Intel which prompted MSI and others to do the same a little while later. Due to huge rivalry between the big hardware vendors, they indulge into such actions which are not only bad for the industry but for consumers too. So far, neither ASUS or MSI has responded to the accusations put against them.