Only a couple weeks ago, @DroidLanding Twitter handle was spotted reactivated. This Twitter account is  popular for teasing upcoming Motorola Droid launches. We had also shared with you a new Droid Turbo device was on the horizon as the handle had leaked a few bits too. There have been leaks and rumors suggesting that the upcoming Motorola Droid Turbo, dubbed as XT1254, will be a 5.2-inch smartphone with 1440 x 2560 resolution display panel. The device will be powered by a quad-core 2.7 GHz Snapdragon 805 processor. @DroidLanding earlier in the day shared a image of an unannounced smartphone which looks to be this particular Droid Turbo. The image tweet was then deleted by the account, however as is expected from the interwebs, the image survives.

Apart from high end processor and a beautiful screen, Motorola Droid Turbo also gets a very premium 20-megapixel shooter along with a 2-megapixel front camera. The upcoming Motorola DROID Turbo also includes a fast recharging feature along with having front facing speakers. The latest Droid Turbo leaked image shows the device in crimson. However, the black version would also be offered.

Motorola Droid Turbo is being powered by a humongous 3,900 mAh battery that will be capable of full charge in just 3 hours - thanks to that fast charging feature. The upcoming Droid is expected to arrive at the end of October possibly sharing the event with the highly anticipated Motorola Nexus 6, the 5.9-inch phablet smartphone from Motorola debuting the upcoming Android L.

Here is the Motorola Droid Turbo image that Droid Landing seems to have accidentally shared: 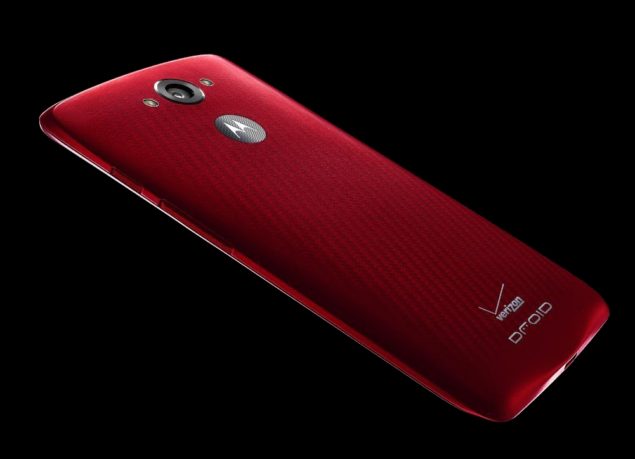