NetherRealm Studios, revealed some footage of one of the most exciting new characters of Mortal Kombat X, Erron Black. Having been featured previously in the prequel comic book series, and seen in one of the story trailers, he has not been confirmed as a playable character until now.

Ed Boon has been tweeting about Erron Black, and the amazing reception he seems to be gathering from Mortal Kombat fans.

Erron Black definitely looks like an incredible character. Having a gunslinger cowboy is a first for the mortal Kombat franchise, and his flashy moves and awesome fatality will certainly gather a lot of fans. 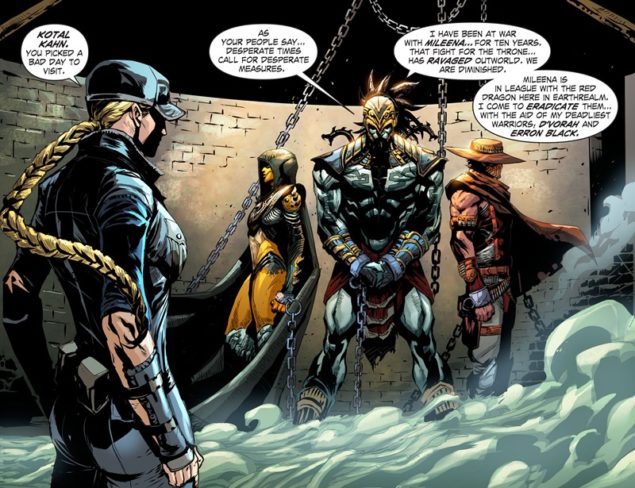 As a gunslinger, Erron Black is a master of firearms and one of Kotal Kahn's most deadly warriors as declared by the Emperor himself. An expert marksman, Erron Black is a crack shot with both of his pistols and rifle, as well as a competent hand-to-hand fighter. His marksmanship is so superb, he can ricochet bullets effortlessly. He also uses bombs filled with sand for added offensive means. He even uses caltrops to control his opponent's movements.

X-Ray Move: Erron Black throws a grenade at his opponent's feet, stunning them, then loads a bullet with the opponent's name on it into his revolver, fires it, hitting his opponent's hip and shattering it. The bullet ricochets up to his opponent's shoulder blade, and ricochets one last time to exit out their shoulder and hit their jaw.

Sand Storm: Erron Black fires a single round into his opponent's abdomen, then throws a bomb into the hole, shooting it as well. The bomb explodes, releasing streams of sand that pour out of his opponent's mouth, eyes, and ears as the sand rises up their waist leaving them twitching.

NetherRealm Studios have released a video preview trailer for the Mortal Kombat X Faction Wars, which can be viewed below.

Mortal Kombat X finally hits the shelves on April 14 for PlayStation 4, Xbox One and Windows PC. The PlayStation 3 and Xbox 360 versions will be coming later in the Summer. We will bring you any new information on Mortal Kombat X, as soon as it becomes available. Be sute to check our previous coverage for more info, here and here.