Yes folks! As much as absurd this sounds, Mionix is a company known for making gaming gears has just announced the Antheia 2000! A complete gaming machine portable and faster than a lawnmower! 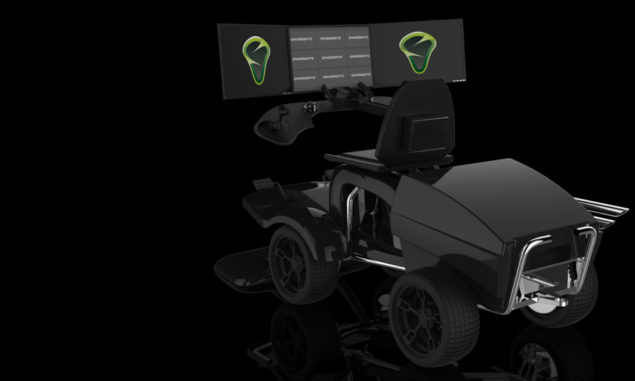 The entire setup weighs just 10 pounds to begin with. That too since the whole vehicle has been designed and made from carbon fiber parts. Their own CEO had this to say:

“This is what happens when I leave my RnD team alone for five minutes, It’s probably the worst idea ever…..I’m awesome” Peter Nygren, Mionix founder and CEO.

Mionix Antheia 2000 riding mower offers reliability and phenomenal performance at an ridiculously high price. The 26-inch 1998CC Asschier & Geeze Electric Start motor with nine-speed transmission (7 forward and 2 reverse) so it can set your own pace while mowing.

Memory foam padded seat for your comfort and 8” carbon ceramic brake discs to provide near perfect braking. Race spec independent coilover suspension make handling a dream, even under pressure. 20” specially lightweight alloy wheels wrapped in ultra low profile tyres improve styling and give you enough rubber on the road to handle this beast….. But this is just the spec of a lawnmower now we add the full gaming experience with the Specially built Mionix gaming system specs include.

So that's a 2000 CC lawnmover with a 9 speed transmission. Well you might be wondering what would be the specs of this mobile rig? You can see them below and bound to be left with your jaw dropping to the ground in pure awe:

Considering these MAMMOTH specifications, one can be sure enough to say they are future proof in terms of gaming for at least 5 years. Not to mention keeping your lawn clean as a whistle while owning noobs in FPS titles and driving your way up to awesomeness in simulation games  at ease.

So whether it's virtual or real time gaming, its a WIN WIN situation! 😀

April Fools’ Day Heads Up! Don’t Fall For These Too Good To Be True Pranks By Tech Brands