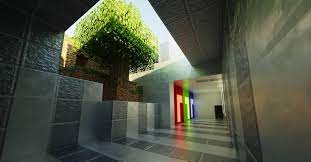 The latest Minecraft preview build on Xbox Series X|S suggests that the game might soon be receiving a next-gen update, complete with ray tracing support.

Minecraft with raytracing on Xbox? The latest Minecraft Preview is optimized for Xbox Series S / X and has early raytracing support 👀 pic.twitter.com/cqH0cuGbtS

We’ve included some videos of Minecraft using real-time ray tracing on PC down below.

When played on a GeForce RTX GPU, you can experience worlds that are fully path-traced, enabling reflections, shadows, caustics, global illumination, and other realistic lighting effects that interact naturally with physically based textures applied to Minecraft’s blocks. These PBR textures enable per-pixel emissives, volumetric effects, and other never-before-seen sights, that together with the path-traced effects usher in the next evolution of Minecraft. Learn more in our GTC Digital talk, available to view here.

In the past few months, we have worked diligently with many talented creators from the Minecraft community to build the first custom ray-traced worlds. Below is a first look at worlds from Razzleberries, BlockWorks and GeminiTay, creators who were selected due to their active imaginations and fantastic track record of making captivating contributions in the Minecraft community.

Minecraft is available globally now for PC and consoles. As always, we will update you as soon as we learn more about this rumored Minecraft Xbox Series X|S update. For now, stay tuned.