Mighty No.9 – Spiritual Successor to Mega Man to Launch on September 18

Mighty No. 9 is finally getting released on September 18 by publisher Deep Silver. The long-awaited Mighty No. 9, the spiritual sequel to Capcom’s Mega Man, will finally release worldwide on the Xbox One, PlayStation 4, Wii U, Xbox 360, PlayStation 3, and PCs running Windows, Mac OS X, or Linux. It will be available digitally and at retail for PS4, Xbox One, and Wii U, while Xbox 360 and PS3 get only the digital releases. 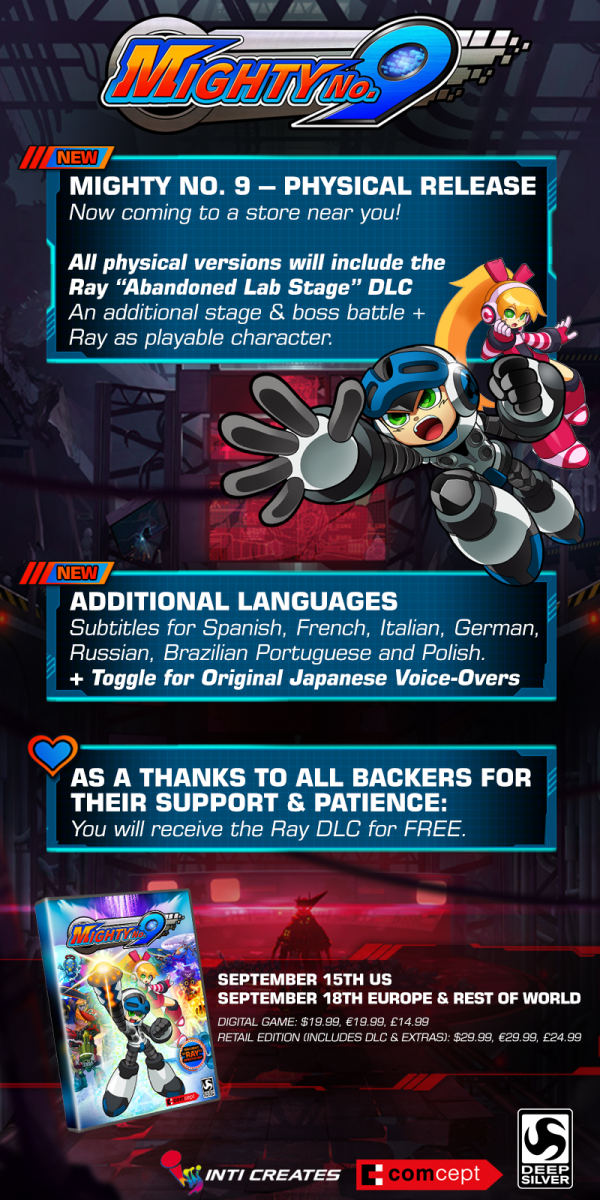 First of all, yes, it is a delay from our original Spring estimate (which, from reading the comments lately, might not come as a surprise to many of you, given we’re in late April already...) But before you despair, please, hear us out first! The reason for the delay, and the reason we are so excited about this new partnership in the first place, is all the cool stuff it will allow us to add to the game (content that all Backers will get absolutely FREE): Added Japanese (yes!) and French voiceovers (in addition to English), FREE for all backers! Extra subtitle languages (Spanish! French! Italian! German! Russian! Polish! Brazilian Portuguese!) FREE for all backers! And best of all: the entire Ray DLC set -- an entire extra level and boss (and playable character) -- FREE for ALL backers!

And that’s just the big bullet points -- this deal also allows us more time and resources for testing, polish, and the creation of physical retail versions (on some systems), and -- very importantly -- won’t affect absolutely any of our Kickstarter plans or rewards. In short, it will make for an even Mightier No. 9, for backers, for us, and for all our fans, worldwide!

We know this is a lot to take in all at once, and we know anytime a Kickstarter ends up with an outside partner some people will be skeptical, so we’ve prepared a short FAQ that goes into a bit more detail about the hows and whys. See if it answers any questions or concerns you have, and if it doesn’t, let us know!

Mighty No.9 is helmed by Mega man creator Keiji Inafune and an all-star team of veteran Mega Man developers. It features classic Japanese side-scrolling action, evolved and transformed for a new generation. The game launched a kickstarter campaign that was successfully funded with $3,845,170.

We will bring you any news on Mighty No.9 as soons as it becomes available. Be sure to check out our previous coverage for more.