Both the PlayStation 5 and Xbox Series X have their own advantages, with Sony’s new DualSense controller being a big check in the “pro” column. The DualSense features cutting edge haptic feedback and adaptive triggers, and is arguably the first gamepad in quite some time to really enhance gameplay in a new way. Microsoft's Xbox Series X/S controller is also solid, but it doesn’t bring quite as much to the table.

Well, it seems like Microsoft may be eying some of those new DualSense features jealously. Microsoft recently sent out a survey to new Xbox Series X and S owners, asking them to rate their experience and state what they might want in the future. Interestingly, one question specifically asks whether the user is “aware of features on PlayStation controllers” and which of those features they’d like to see included in future Xbox controllers. 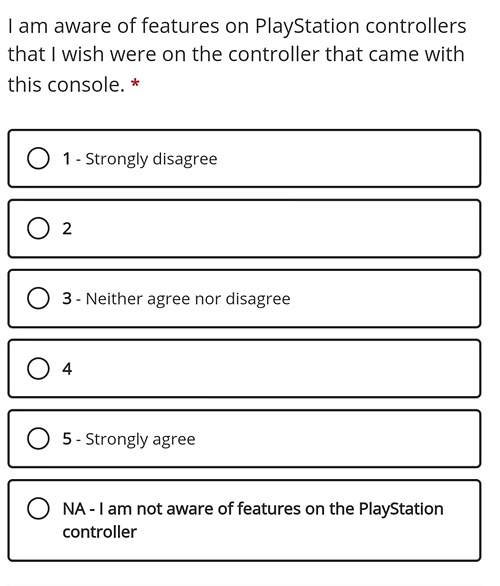 While the basic Xbox Series X/S controller is likely set for now, Microsoft is almost certainly working on a third iteration of their Xbox Elite controller – could we see features like haptics and adaptive triggers added to that gamepad? It wouldn’t surprise me! As a reminder, here are some of the unique features the DualSense controller brings to the table…

What do you Xbox fans think about this? Do you want Microsoft to take some notes from the DualSense or is the Xbox Series X/S controller just fine as is?