A few days back Microsoft (NASDAQ:MSFT) released their earnings report for Q4 and 2017's fiscal year. One of the biggest takeaways from the year is that Gaming has become one of Microsoft's largest areas. As we've covered a few days ago, CEO Satya Nadella indicated in the earnings call that gaming is now worth over $9 billion to the company. More than this, it's increasingly profitable. 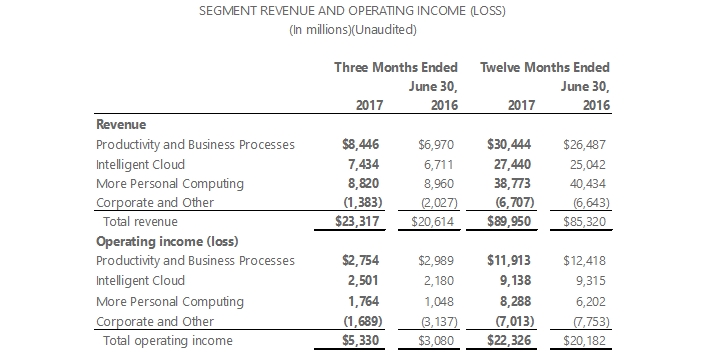 Azure, Microsoft's cloud platform and services has seen impressive growth. A 97% year on year revenue increase has seen the intelligent cloud section generate $27.4 billion in revenue in 2017, with income of $9.1bn. Of course, division comprises of more than just Azure.

It's a strong areas for Microsoft. Working on an annualized rate, where the company takes the final month of the quarter and multiplies it by twelve, commercial cloud services have exceeded $18.9bn. Q4/FY 2016 saw an annualized run rate of $12.1bn, indicating great growth.

What is also mentioned, however, is the "intense competition" Microsoft faces in all markets. In cloud computing alone Microsoft face competition from Google's (NASDAQ:GOOGL) Google Cloud as well as Amazon (NASDAQ:AMZN) with Amazon Web Services.

One thing that was covered in the earnings call is the impact of renewals on the Intelligent Cloud's strong quarter. Karl Keirstead of Deutsche Bank was the first to question if it was partly a cause of a renewal flush and potentially a one-time phenomenon. Amy Hood, Microsoft's CFO, responded by indicating that while the record volume of expirations did lead to a high renewal level, new revenue has left the segment in an encouraging position.

However, despite this revenue increase the division saw an income decrease of $235m. This has been attributed to higher operating expenses and a 3% impact of unfavourable currency exchange rate.

Within Microsoft's financial statements, the gaming division comes as part of the Personal Computing section. What this means is that it's not always easy to get definitive figures. However, the previously mentioned statement of games being worth over $9bn to the company is a strong indicator.

The core of Microsoft's current direction in gaming comes from the reveal of the Xbox One X as well as two current services in Mixer and the Xbox Game Pass. Mixer, a live streaming service, looks to draw more people to the Xbox Live community across multiple platforms by offering an easier way for people to stream their games while also offering new ways to steam. The other service, Xbox Game Pass, is a subscription based product that allows subscribers to play selected older titles as a part of their subscription.

Gaming software and service sales also saw a year on year increase of 11%, offsetting a 29% fall in Xbox Hardware sales. Gaming revenue in all saw a rise of $44m, or 3%. Touted as being a highly profitable area for Microsoft, the company is looking to grow it across multiple platforms, which includes home consoles, the PC and mobile devices. With a community of 53 million active users, there is certainly room for growth.

Outside of gaming, software and services has seen strong grown throughout for the fourth quarter. Windows revenue increased $103 million, or 2%. Search advertising also increased by 8%, $124m. This has primarily been as a result of Bing and likely due to its integration with Windows 10.

The problem for the division comes with a fall in hardware. Revenue across personal computing fell $140 million in the quarter. Countering the revenue increase in software came a Surface revenue decrease of $20m. The largest fall, however, came from phones where revenue fell by $361m.

Following the news of Microsoft's great results, share prices hit an all-time high of $74.30, finally closing Friday at $73.79. Microsoft also revealed that they will be laying off thousands of employees. Although this has been stated not as a cost cutting measure, it will undoubtedly result in this. The eventual aim is to restructure how they handle sales, focusing primarily on the cloud business.

With the current growth of the intelligent cloud division, particularly the success of Azure, Microsoft will understandably focus on the area. Focusing on a sales force that can sell larger packages will help greatly with the bottom line and further increase the already booming area.

Microsoft are looking towards Q1 with revenue predictions of around $24.85 to $25.05bn.