Microsoft (NASDAQ:MSFT) has begun their 2019 fiscal year with a bang, reporting revenue of $29.1 billion and net income of $8.8 billion for the quarter ending September 30. That’s a 19 percent year on year increase for revenue and an impressive 34 increase for income. Earnings per share were $1.14, up 36 percent from a year ago. Analysts were expecting earnings of $0.94 per share. Microsoft stock gained around 3 percent in after-hours trading following the healthy Q1 earnings report. 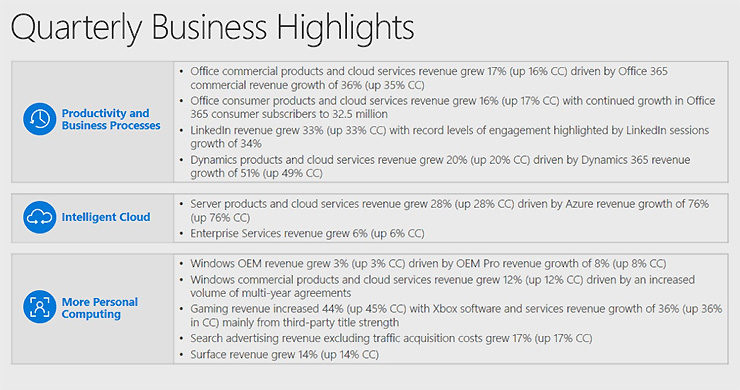 The Cloud Envelops All

As was the case with their last several quarters, Microsoft’s Intelligent Cloud division was a source of huge growth for the company. Intelligent Cloud revenue was $8.6 billion, driven by a 76 percent increase in Azure business. That figure isn’t quite as large as some of the Azure growth numbers we saw in FY2018, but it’s certainly still impressive. Meanwhile, Dynamics 365, Microsoft’s cloud-based business management system, saw 51 percent growth. Needless to say, during their earnings Q&A, Microsoft CEO Satya Nadella and CFO Amy Hood emphasized their plans to integrate cloud tech into almost everything they do, from Office to gaming, essentially creating a single cloud-based platform.

Office 365, Still Dependable as the Seasons

Productivity software continues to be a dependably lucrative business for Microsoft, with Office 365 commercial revenue up 36 percent and Office 365 consumer revenue up 16 percent. Overall, the Productivity and Business Processes division pulled in 9.8 billion, a 19 percent increase over the same period last year. The LinkedIn social networking site was also up 33 percent, proving Microsoft can wring money out of a service nobody really understands or likes. 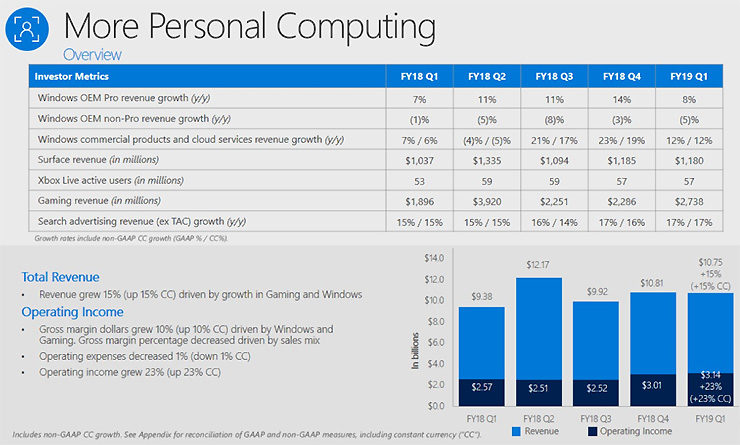 This quarter saw Microsoft’s Xbox gaming division continue to rise from afterthought to a major bright spot for the company. Gaming revenue was up 44 percent year on year, with Xbox software and services sales up 36 percent, mainly due to the success of certain third party games (Fortnite and PUBG, basically).

While the Xbox One hasn’t sold as well as the PS4, Nadella and Hood were happy to boast about the revenue and engagement-generating power of services like Xbox Live and Xbox Game Pass. Speaking of which, Nadella confirmed Game Pass will be making the jump to PC in the future. There is also excitement about the xCloud streaming service, which Microsoft expects to scale to 100s of millions of users. Between these statements, and Microsoft’s recent investments in first-party developers, its clear gaming is a significant part of the puzzle going forward.

Some Volatility Ahead, but Nothing to be Worried About

As we’ve discussed before, Microsoft has built themselves a dependable money-making machine, powered by the cloud and subscription-based productivity software. As Microsoft begins to integrate gaming into their cloud platform, the machine should only become more sturdy. That said, the kind of gains Microsoft has seen over the past year won’t last forever, as Azure growth is likely to become somewhat more volatile. During the earnings Q&A, Amy Hood delved into why…

“You will see volatility in the bookings number for the reasons we've laid out before, the changing customer base but also large contracts and commitments done by Azure. We actually saw that this quarter and we again saw a quite good performance in some of these larger long-term Azure contracts. […] as the business gets bigger and we do bigger and larger deals and some of them are on-prem and some of them are in Azure, you're going t see volatility.

But what I try to do is, think about the impact of all the key data points, which is how do we do in quarter, how did we do on the unearned revenue on the balance sheet, and how do we do in overall bookings. And if I triangulate between all those three […] I feel really good about our commercial performance.”

In other words, the sailing may not be quite as smooth in the future, but, overall, Microsoft is looking shipshape. Microsoft is looking confidently towards Q2 2012, with the company expecting between $31.9 billion and $32.7 billion in revenue. Sounds like it’s going to be a merry Christmas for investors.