4A Games' Metro Redux has finally been launched, and North American players are already enjoying the compilation package that contains two last-gen critically acclaimed single player post-apcalyptic-themed, and survival horror first-person shooter video games. Developed for latest consoles and PC only, Metro Redux features vast graphical improvements, and it looks like the developer picked up quite much while working on Microsoft's Xbox One, as they claim that the 10% GPU performance boost that the console previously received isn't actually 10%, and while DirectX 12 is said to be significant for the console, AMD's Mantle API is considered "temporary". 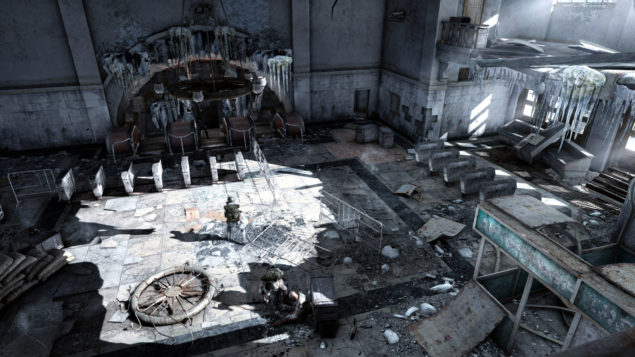 Released recently by Deep Silver and 4A Games, Metro Redux is actually a new generation upgrade of two last generation video game titles. Packing all the previously released downloadable content and featuring advanced next-gen rich graphical environments, the new title is a collection of Metro: Last Night, which is a single player post-apocalyptic-themed first-person shooter game, and Metro 2033, which is a survival horror first-person shooter game.

Out for PC, PlayStation 4 and Xbox One, 4A Games has done much work to give a new life to two titles that were released before the latest consoles were launched, and to fetch more information on how the developer made this possible, Digital Foundry sat with 4A Games' Chief Technical Officer, Oles Shishkovstov and asked him about the development team's experience with the latest consoles while developing Metro Redux.

Talking about Microsoft's Xbox One console and DirectX 12 API, Oles claimed that the 10% GPU performance boost that the console received back in June due to Microsoft's decision to drop the Kinect 2.0 from console's standard bundle is not actually a solid 10%.

"Well, the issue is slightly more complicated – it is not like ‘here, take that ten per cent of performance we’ve stolen before’, actually it is variable, like sometimes you can use 1.5 per cent more, and sometimes seven per cent and so on. We could possibly have aimed for a higher res, but we went for a 100 per cent stable, vsync-locked frame-rate this time That is not to say we could not have done more with more time, and per my earlier answer, the XDK and system software continues to improve every month."

Oles also expressed his thoughts on the upcoming most anticipated DirectX 12, and AMD's Mantle API. According to him, both the DirectX 12 and Mantle are ideal shifts in API design, and while his thoughts are that the former might prove to be very significant for Microsoft's latest video game console, he believes that the latter will just be "temporary."

"Aside from them being much more close to the (modern) metal, those APIs are a paradigm-shift in API design. DX11 was ‘I will keep track of everything for you’. DX12 says ‘now it’s your responsibility’ – so it could be a much thinner layer. As for Mantle, it is a temporary API, in my honest opinion."

"No, it’s important [for Xbox One]. All the dependency tracking takes a huge slice of CPU power. And if we are talking about the multi-threaded command buffer chunks generation – the DX11 model was essentially a ‘flop’, while DX12 should be the right one."

4A Games is considered as an extremely capable developer from technical point of view. Metro Redux was released for PC, PlayStation 4 and Xbox One on August 26, 2014 in North America, and it will be released in Europe on August 29, 2014.