We have reached an age where robots are soon going to take over everyday tasks that are normally done by humans. One such robot named ATRIAS, a bipedal robot that has been structured in a way that it mimics the walking pattern of humans. In the first outdoor test the robot was able to maintain steady pace of 4.8 km/hour while going through jagged terrain and even after being hit with small objects.

ATRIAS does a better job at walking than most humans

The developers of this device are engineers at the Oregon State University in the US, they indicated that ATRIAS would be the running robot of the future, this is the first time researchers have come close to mimic the mechanics of human movement. This robot has six electric motors and surprisingly it requires less power than other robots, requiring a battery the size of a two litre container of milk.

"Animals with legs sort of flow in the energy used, in which retained kinetic energy is just nudged by very efficient muscles and tendons to continue the movement once it has begun," said mechanical engineer Jonathan Hurst in a press release.

"That's part of what's unique about ATRIAS - not just that it can walk, and will eventually run - but that it's doing so with animal-inspired fluidity of motion that is so efficient," he added. "This will ultimately allow a much wider range of robotic uses and potential than something which requires larger amounts of energy."

The outdoor trial of ATRIAS showed that it uses less energy than other bipedal robots. The robot was attached to a safety harness which rolled along it to catch it in case it fell, the robot did fall a couple of times due to minor sensor glitches but this test did successfully show that ATRIAS is about three times more energy-efficient than other robots of the same category. But don’t just believe me, here’s a word from the engineers:

"It already appears that ATRIAS is three times more energy-efficient than any other human-sized bipedal robots," said another engineer on the project, Christian Hubicki. "And this was the first time we've been able to show its abilities outside, in a far more challenging environment than anything in a laboratory."

An important part in the development of this robot is figuring out how babies and other small animals input sensory information obtained from their environment and use that info to coordinate their movement. It has already been shown that ATRIAS can stand upright on grass and it still keeps on going even in difficult terrain and when kicked or hit with small objects. 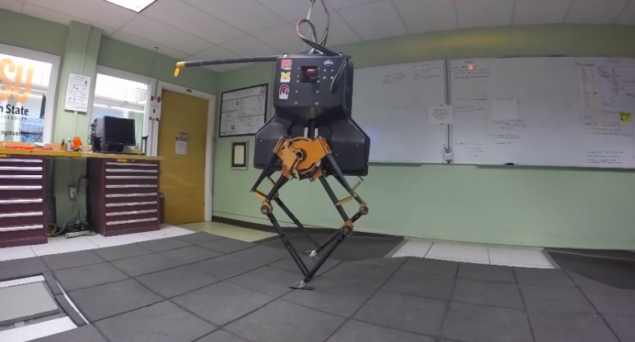