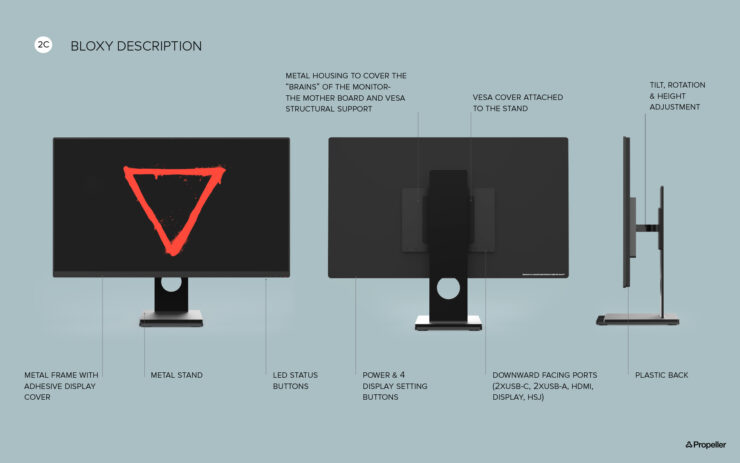 Eve Spectrum is a unique gaming monitor in that its feature set was crowd-designed. A passionate community of would-be customers discussed what was most needed before the specifications were finalized a while ago.

Looking at them now, it's easy to tell knowledgeable folks have put thought into this. Set to release in the second quarter of 2020, the Eve Spectrum uses a Nano IPS panel that's set to debut with the LG 27GL850. That one is already looking like an impressive monitor, featuring a 27-inch display with Quad HD (1440p) resolution and 144Hz refresh rate, not to mention 98% coverage of the DCI-P3 color space, HDR10 support, FreeSync 2/NVIDIA G-SYNC compatible support, and very low response time and input lag. However, the Eve Spectrum goes beyond even those specs. The enthusiasts pushed to get a higher maximum refresh rate through overclocking (up to 165Hz), improved brightness (400 cd/m², which also means DisplayHDR400 certification), eight local dimming zones, improved contrast (at least 1000:1, up from 750:1 of the LG 27GL850) thanks to different polarizer treatment, and USB Type-C power delivery for up to 100W, a highly requested feature.

Furthermore, the monitor's backlight strobing will be managed with an approach similar to ELMB Sync (Extreme Low Motion Blur Sync) seen in Asus monitors. This allows for an evenly bright experience and most importantly compatibility with Adaptive Sync technology, which wasn't previously possible.

In terms of aesthetic look, five concepts are currently being voted by the community. The Bloxy design in the featured image is currently winning the poll with 53% votes, pulling just ahead of the Blade design (50%) with the Ring, Float and Stationary designs trailing far behind those two.

While this will be the first gaming monitor made by Finnish company Eve-Tech, it's not the first time they have used crowd-design. While the company's first product, an 8-inch Windows 8.1 tablet called T1 and released in late 2014, was designed in a traditional way, the more recent Eve V was the first crowdsourced two-in-one PC to be available on the market. Marketed as a 'Microsoft Surface Pro killer', its crowdfunding campaign became the quickest one in Europe to reach €100K in funding; the final tally on IndieGoGo was €1.283.397. The product was well-received, though there were some complaints with regard to shipping delays some customers had to endure.

We spoke briefly with Eve-Tech CEO Konstantinos Karatsevidis via Skype to learn more about the Eve Spectrum and the company behind it. The monitor's design will be locked down on October 18th (while electrical engineering is already in the works) and information on pricing and pre-orders will come right after. The first prototypes are expected to be ready next month and they'll be tested with the help of the crowd, with the goal to enter production in the first quarter of 2020.

Karatsevidis revealed that Eve-Tech is now backed by PCH International, a global design manufacturing company based in Dublin that will take care of order fulfillment and inventory management as well as helping Eve-Tech with components sourcing and keeping supplier development costs down.

The Eve Spectrum isn't all the company has on its plate right now, by the way. The next project is codenamed Muse and will deliver crowd-designed headphones.

The focus will be on great noise-canceling performance in addition to 'top-level' audio performance. Manufacturing will be a collaboration with Grandsun (which produces Audeze headphones). Muse is also going to pack 40mm ironless drivers with a stack of magnets instead of the traditional setup of a single magnet with soft iron parts; this approach should reduce transducer motor distortion. Lastly, four beamforming microphones will be implemented in a way that a beam will be formed from each earcup, thus eliminating 90% of the noise outside that beam.

The latest official update posted two days ago revealed that Grandsun proposed to use their existing Cleer Flow II headphones as the basis for Muse. This would allow the project to become reality much faster and so far, the community overwhelmingly (92%) supports the idea.