How Does MediaTek’s 8 core processor Fare Against The Competition?

You would expect the 8 core SOC by Mediatek, the MTK 6592, to be useless. With it's octa core power, it generally seems to be a gimmick. The MTK 6589 had four Cortex A7's, the MTK6592 upped the ante by doubling the number of cores. Lets see how this panned out.

The flood of devices which will sport the MTK6592 is almost upon us. The main think about Mediatek is that it gives the manufacturers an all in one package. GPS is also embedded into the SOC. Recent rumors indicate that Mediatek is working on a new chipset which will have LTE support.

MediaTek's octa core chipset sure gives a nice score on Antutu. Eight Cortex A7's working simultaneously results in a lot of raw power, but this test is biased. The GPU side of the MTK 6592 is also not bad, managing 813 GFX bench 1080p off-screen points. The Adreno 320 manages a good 900.

U wont be actually using eight cores anytime soon. In essence, u will rarely see an application utilizing eight cores at a single time. This increased the load on the processor. The job which will be completed by 1 core of the Snapdragon 800 will take a long time on the MTK6592. Per core performance is what truly matters in real-time. 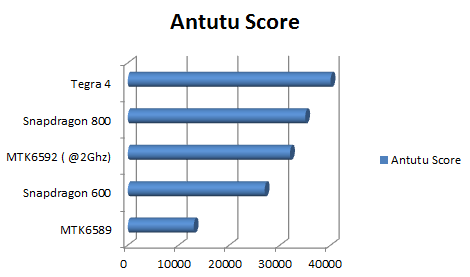 The Author feels the need to optimize the Android ecosystem as a whole, the "ART"semi-replacement of Dalvik was a nice step in the Android 4.4. On the hardware side, work must be done on maximum of four cores. The "More the merrier" statement does not necessarily apply itself everywhere.

The main point of these MediaTek SOC's is to provide the end user with a cheap alternative to traditional smartphones. The all in one solution provided by MediaTek's chipsets has had a profound effect on the global market. Although there is no sign of a Cortex A5x series based chipset by MediaTek, the MTK6592 will have to suffice till then.