With the race in smartphone chipsets having moved towards 64-bit, more manufacturers seem to be catching to this trend. World's second largest chipset manufacturer MediaTek also has two new octa-core 64 bit chipsets in store for us next year which it has unveiled today. 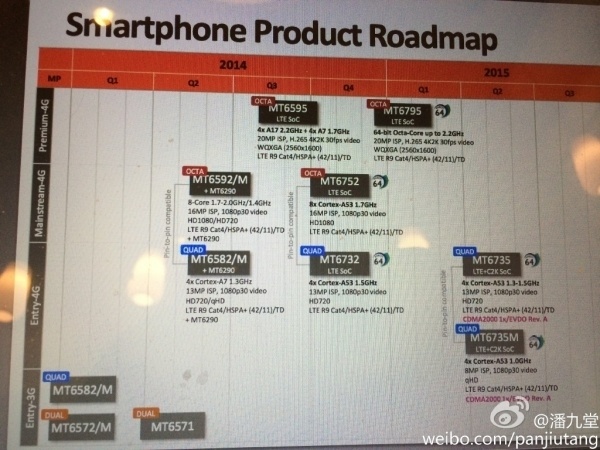 According to a product roadmap unveiled by the company today, it seems like MediaTek has plans to give Qualcomm some tough competition next year with it's 64 bit SoC. Qualcomm is currently the world's largest chipset manufacturer and it's chipsets can be found in almost all of the top smartphone flagships today.

The MediaTek MT6753 will be the successor to the company's MT6752. Architecture and component wise, the MT6753 does not differ that much from the MT6752, with both of them sporting eight Cortex A53 cores. Clock rate for the MT6753 slightly lower that the MT6752. The MT6753 ends up adding CDMA2000 1x, EVDO Rev A and complete 3G and 4G connectivity irrespective of carrier.

In fact, the MT6753 also sees its frequency decrease from it's predecessor. MediaTek's 64 bit offering for the next year will have a frequency of 1.3 GHz, which is lower than the 15 GHz frequency of the MT6752. How well is this received by the market, we'll find out when the chipset becomes available. The company also ahs other quad core offerings with Cortex cores and 4G support on board. Seems like 2015 will be a busy year for MediaTek.