At the rate technology has started to progress, it takes manufacturers only a year to make their hardware and gadget offerings more and more advanced. What is claimed today to be record breaking and earth shattering will be topped by even more advanced pieces of silicon next year and the cycle will continue for quite a while indeed, some might say forever.

When it comes to mobile processors, we've seen the landscape shift considerably over the previous year. While Qualcomm was the one manufacturer who had a toe in nearly every device out there, others have started to step up their game and now we've got plenty of contenders racing for the top SoC spot. One of these is MediaTek, and today we've managed to get our hands on some alleged official Helio X20 benchmarks. 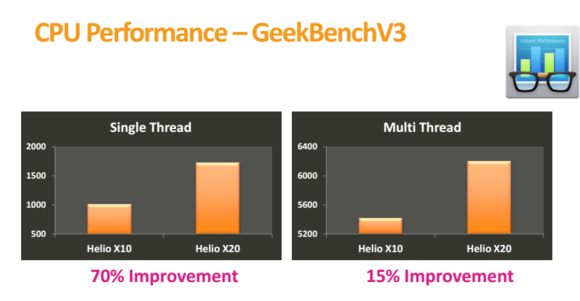 When it comes to the number of cores on a mobile processor, it can safely be said that there's no other manufacturer out there that beats MediaTek at its came. The company's Helio X20 comes with not eight, but ten cores on board, which might sound like an overkill to many out there. MediaTek's logic for such a processor design is that rather than dividing the CPU performance index into two categories, as according to the principles of big.LITTLE, why not introduce a third core cluster in the mix so that the high performing segment is left with as little burden as possible.

Now some benchmarks which have been claimed to be official MediaTek slides for the Helio X20 have surfaced today, and you can see the improvements that the new processor brings into the mix. When compared to the Helio X10, which is MediaTek's offering for mid-tier devices, the Helio X20 is shown to have a clear advantage. In particular, the chipset offers up to 70% improvement in single thread computing on GeekBench, while multi thread also sees a 15% improvement. 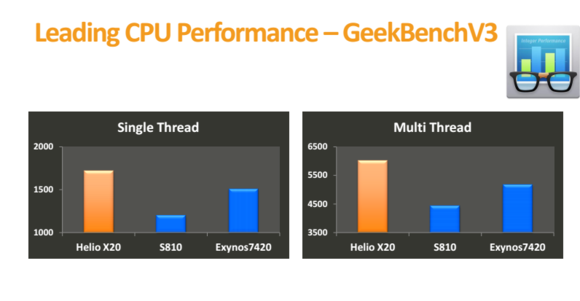 But while comparing the Helio X20 to the Helio X10 might be unfair, given that the former is a flagship SoC in all regards, when compared to Qualcomm's Snapdragon 810 and Samsung's Exynos 7420, the difference is still present. As you can see in the image above, while the Exynos 7420 manages to score somewhere around 1500 in single core GeekBench, the Helio X20 surpasses this by nearly 2500 points. When looking at multi core results, the Helio X20 manages to get around 6000 points, the Exynos 7420 manages to miss the 5500 mark by a margin. Qualcomm's Snapdragon 820 sits comfortably at third place, and for MediaTek, looks like adding that extra core cluster just might work things out.

When it comes to Antutu, the Helio X20 absolutely decimates its smaller cousin and manages to score nearly 70,000 points. In comparison, the Helio X20 can be seen to touch approximately 50,000. So looks like MediaTek's got a strong contender on its hands with the Helio X20. The processor has already been rumored to come in HTC's next flagship, the HTC One A9. In fact, some leaked benchmarks of the device show scores very close to the ones that have surfaced today.

So perhaps HTC just might indeed be looking to reverse its fortunes with MediaTek's Helio X20. The smartphone manufacturer saw perhaps one of the most poor device launches of 2015 with the HTC One M9, a device that managed to not only overheat, but also failed to generate a reasonable consumer interest. So, will HTC bounce back and MediaTek make a strong appearance with the Helio X20? Only time can tell. Let us know what you think in the comments section below and stay tuned for more.