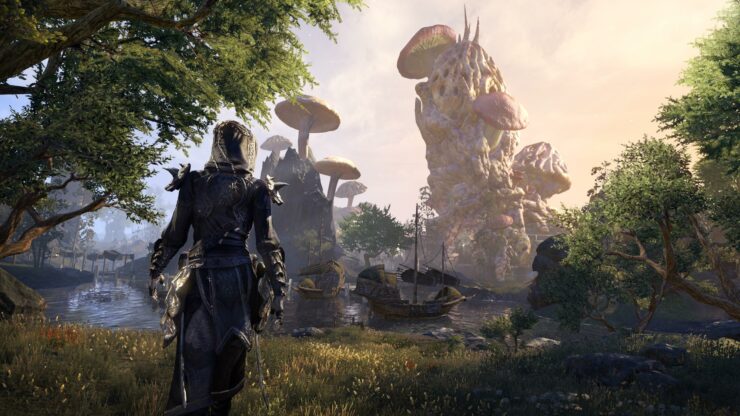 Elder Scrolls Online just received its first Chapter, or expansion if you will, dedicated to Morrowind's beloved Vvardenfell (Chris thought it was good but a bit pricey for the content available). During Bethesda's E3 2017 conference, Zenimax Online revealed the next two DLC updates, Horns of Reach and the Clockwork City; these will be included with the ESO Plus subscription or can be purchased separately.

We were able to have a brief chat with Game Director Matt Firor at E3 2017. Check it out below!

Do you have plans for a transmogrification system?

There are, we've talked about that publicly. For readers who don't know what that is, it's a system where you can take your favorite armor attributes and apply it on the visual appearance of the armor that you want to wear.

We have talked about working on such a system and we are; we don't know when it's going to launch. It is pretty technically complex. We're committed to doing it but we don't know exactly in which update it will be.

Do you have any plans for a respec overhaul to make it easier for players to change their specs?

Yes, we've also talked publicly about that and what players have asked for specifically is the ability to just choose one skill line and respec that instead of everything, which of course takes forever and you have to remember everything that you had before.

We're working on it now but again, not exactly sure what update is going to be in.

What about a storage for housing items?

Will it be possible to queue as a group for Battlegrounds and if so, when?

Yeah, we're definitely looking into the queuing problems for Battlegrounds. We solved most of them, but one of the ones left is that queueing with a group doesn't always work the way it's supposed to. We'll fix that problem.

Are you going to fix that bug where if a player leaves a Battlegrounds match early, no one gets any rewards?

We'll fix that. Essentially a player quits and it gets the group into a weird state.

It was just confirmed that the Clockwork City DLC will have a "mini-Trial". Can you tell us what you mean by that?

It's going to be the same difficulty, but fewer bosses.

Can you talk a bit more about the next updates coming to Elder Scrolls Online?

Our next update is the Horns of Reach DLC, adding two new dungeons with both Normal and Hard modes. It has a couple of base game enhancements, a couple of new houses, but it's really for the players who love the dungeons experience and there are lots of players who love to do that kind of content. New gear, new monster masks for dailies.

And then the update after that is Clockwork City.

Okay, and when can gamers get their hands on these updates in Elder Scrolls Online?

The Horns of Reach update comes in August,  while Clockwork City is in Q4. PC players will probably get them two weeks earlier than console players due to the certification process.

We spent the first six years or so of this project as a PC game, so we had to support an extraordinarily wide range of hardware for PC and Mac. We have a Scorpio devkit (the codename for Xbox One X), we're not really done with the tweaking of all the different things but most probably it will be 4K@30fps but with additional graphical fidelity upgrades.

Those are to be determined among options like longer draw distance, better water reflections, higher resolution shadows, those things. For instance, on PS4 Pro if you run on an HDTV you get a bunch of those fidelity upgrades, though those are not available when playing at 4K resolution on Sony's console.

The game on console also features support for HDR (High Dynamic Range) displays. Now that the first HDR monitors are starting to appear, do you have plans to add HDR to Elder Scrolls Online on PC?

We will do it, we don't have a timetable yet. On consoles, there is a well-defined API and a well-defined hardware spec. On PC, there's a much broader range of hardware to account for.