This New Touchscreen Will Increase Your Battery Life Dramatically

A new and innovative type of touchscreen material has been invented by scientists in the UK which requires very little to light up, saving you a lot of battery in the process. The new material will allow for a cheaper way alternative to normal smartphone and tablet screens, improving both visibility in sunlight, which most phones and tablets are zero at, and saving your battery like anything.

The team of scientists is already working hard and they are currently in talks with some the biggest consumer electronic giants to see whether their new material touchscreen can replace the current LCD’s of normal smartphones and tablets, in the next couple of years. This would at least end the need to always have a power bank on you or to charge your phone daily, and more than a few times every week.

"We can create an entire new market," one of the researchers, Peiman Hosseini, told The Telegraph. "You have to charge smartwatches every night, which is slowing adoption. But if you had a smartwatch or smart glass that didn’t need much power, you could recharge it just once a week."

The material is made by a spun off Oxford University company called Bodie Technologies, who reportedly made the material out of a phase changing material, called Germanium-Antimony-Tellurium (GeSbTe, if you look at the periodic table) or simply GST. The team is obviously being confidential about their technology but it was based on a paper they published last year which described how stacks of GST and electrode layers can be used to make both rigid and flexible displays.

The stacks are comprised of a single 7 nano-meter thick layer of GST sandwiched between two separate layers of transparent electrode. Electric current is then fed to the stacks which produce colored images as a result. 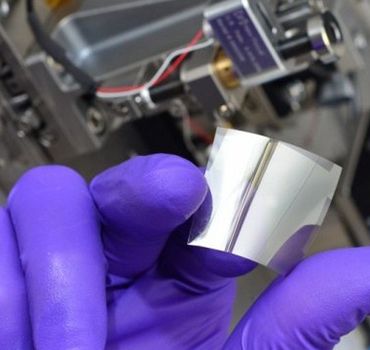 The GST and electrode layer

"Initially, still images were created using an atomic force microscope, but the team went on to demonstrate that such tiny 'stacks' can be turned into prototype pixel-like devices," The Engineer reports. "These 'nano-pixels' - just 300 by 300 nanometres in size - can be electrically switched 'on' and 'off' at will, creating the coloured dots that would form the building blocks of an extremely high-resolution display technology."

This new touchscreen material manipulates incoming light in its own way and hence results in producing vibrant colors at very high resolutions ,that everyone desires, even when exposed to bright sunlight during the day.

"This makes them potentially useful for 'smart' glasses, foldable screens, windshield displays, and even synthetic retinas that mimic the abilities of photoreceptor cells in the human eye," says the team.

With this kind of technology we can efficiently cut the power consumption of our smartphones and it would dramatically reduce all the display screen power drainers such as the LCD panel, the backlight and what not. If this goes into commercial production it can prove to be a great thing for everyone, till then we will just rely on the frequent charging.