Galaxy Note 20 Ultra is a bit of a mystery at this point. There was a leak a month ago talking about how Samsung is not going to release a Galaxy Note 20 Ultra in the Note 20 series, followed by a listing that showed that a device exists along with a couple of extra leaks shedding light on the existence of the device.

We do know that the event is taking place in August and we are already expecting the Note 20 and Note 20 Plus, but so far, the situation with the Galaxy Note 20 Ultra is a mixed bag. However, the leak we have received today is the biggest so far.

The leak is coming from Technology Meow who posted the entire spec sheet of the Galaxy Note 20 Ultra on Weibo. Now obviously, considering how we have not heard much about the device anyway, we will ask everyone to take this with a grain of salt so you do not end up getting your hopes up high. But for those interested, here is a look at the spec sheet. 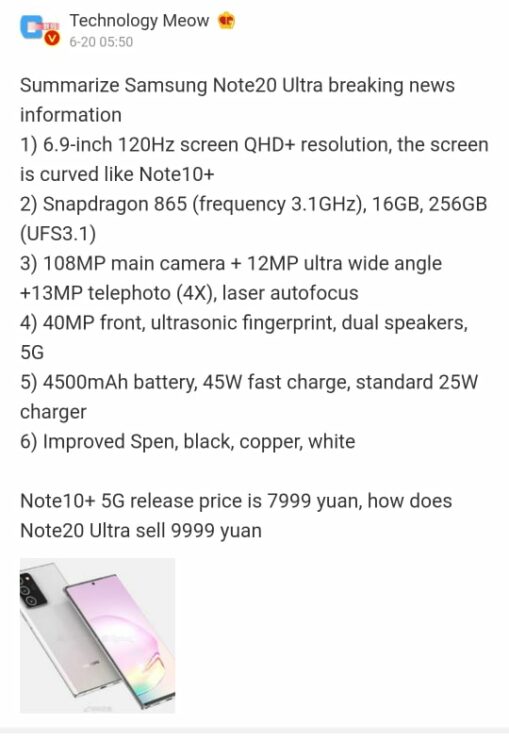 Now the spec sheet reveals everything that the device is going to feature. The best part is the 6.9-inch AMOLED screen that will have QHD+ resolution as well as 120Hz refresh rate. The battery is not as massive as some may have expected as the same capacity can be found on the Galaxy S20 Plus, but again, this is just a leaked list of specifications, so there are likely to be some changes in the final version.

Another important take away is the price. The Note 20 Ultra is tipped to cost 9,999 Yuan, which roughly converts into $1,400+. Which seems reasonable, because we are getting three devices. So, the starting point could be $1,000. but at the time of writing, it is too soon to say anything.