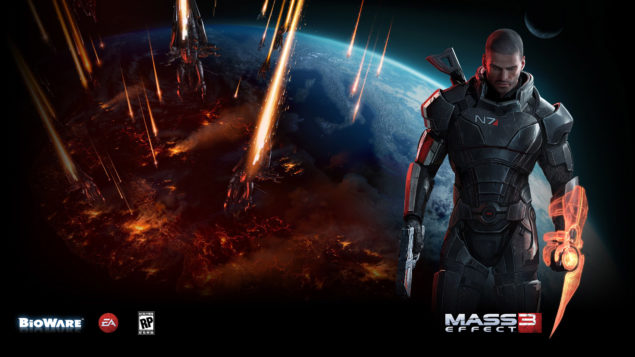 EA released the "Take Earth Back" Teaser Trailer for Mass Effect 3 last week, Now an extended version of the trailer has hit the web which shows the fall of our planet and the fight for survival against the reapers.

Undoubtedly an impressive piece of CGI by Bioware (Developer of the third series in Mass Effect franchise). From the trailer you can see that earth has been invaded by a reaper invasion force which was hinted back in the Arrival DLC from Mass Effect 2. Shephard Strikes back at them with the army he has assembled, You can see lots of gunships and the famous Normandy SR2 during the cutscenes.

The Mass Effect 3 Demo (Download here) also lets you play two missions, One which shows the beggining of the invasion and a later campaign which pits us on the salarian homeworld to rescue a female krogan. The Demo also allows you to play the Co-Op Multiplayer which allows 4 players to fight against waves of Cerberus troops in 2 maps.

Bioware's Mass Effect 3 which is also the last of Commander Shephard's journey arrives on 6th March 2012 on the PC, PS3, Xbox 360. Bioware also advises to keep your save games since mass effect series doesn't ends here. More on that here.