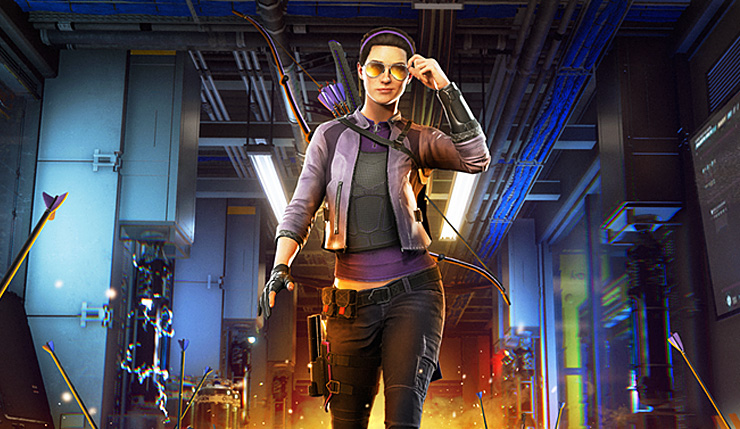 Prior to release, the makers of Marvel’s Avengers promised a variety of new characters and content was on the way, but a lot of that was delayed following a less-than-stellar launch. Thankfully, one promised chunk of new content will be coming this year, as Square Enix has announced Operation: Kate Bishop will launch in December.

As the title implies, the free update will add a playable Kate Bishop (aka the third person to carry the Hawkeye name). You can also tackle the new “Taking AIM” story mission, which sees Bishop jumping through timelines to save the original Hawkeye. You know, typical comic book stuff! You can check out a quick Taking AIM trailer, below.

Here’s a bit more detail about the Taking AIM operation:

The lead-up to Taking AIM began with enigmatic new Tachyon missions that started appearing on players’ in-game War Tables several weeks ago. In Taking AIM, Kate Bishop, master archer and skilled gymnast, resurfaces after her investigation of Nick Fury’s disappearance following A-Day leads to her mentor Clint Barton (aka Hawkeye) going missing as well. As she unravels the mystery behind the sudden appearance of the time-warping Tachyon Rifts, she uncovers a twisted new plan from AIM, which pushes her to work with the Avengers once again.

Taking AIM’s story begins shortly after the conclusion of Marvel’s Avengers’ Reassemble campaign and is just the first half of the two Hawkeyes’ Story Arc. Clint Barton’s Hawkeye will then take the stage in early 2021 to complete the double-feature and lay the groundwork for what’s next in the Avengers Initiative.

Operation: Kate Bishop will be free to all Marvel’s Avengers owners, although Square Enix has said you’ll also be able to buy a $10 “Hero Challenge Card” for Kate, which essentially acts as a battle pass. There should be 40 tiers of both free and paid content to earn from the card.

Marvel’s Avengers is available now on PC, Xbox One, and PS4, and is playable on Xbox Series X/S and PS5. A full free next-gen upgrade is coming sometime in 2021.