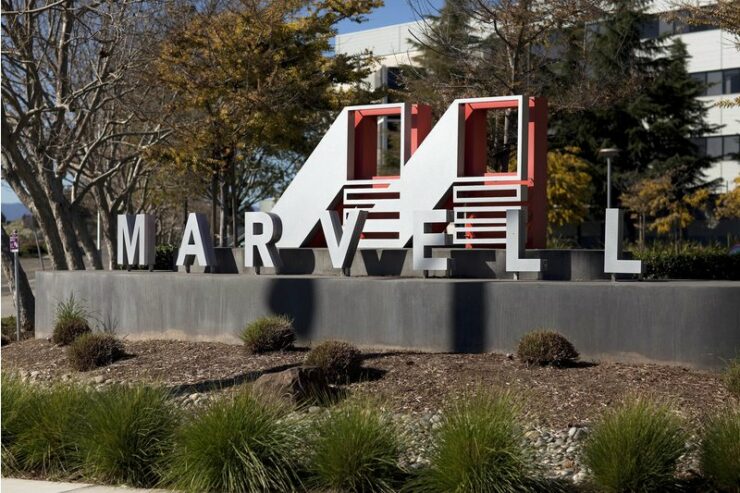 Marvell Technology Group Ltd. signage is displayed outside the company's headquarters building in Santa Clara, California, U.S., on Tuesday, Feb. 8, 2011. Marvell, maker of the processor that runs BlackBerry smartphones, said the success of tablet computers and phones that surf the Web is a bigger threat to traditional personal computers than laptops. Photographer: David Paul Morris/Bloomberg via Getty Images

Marvell today announced the industry's first NVMe over Fabric (NVMe-oF) SSD converter controller, the 88SN2400 designed and optimized to convert an NVMe SSD into an NVMe-oF SSD, or simplified a technology designed to transfer data between a host PC and a target SSD device or system over a network like Fiber Channel or Ethernet.

By bringing low latency access over the fabric and exposing the entire SSD bandwidth to the network, the Marvell controller supports true scalable, high-performance disaggregation of storage from compute. The 88SN2400 utilizes a simple, low-power and compute-less Ethernet fabric instead of a traditional PCIe fabric controlled and managed by an enterprise-class server SoC with integrated 100GE controllers.

As data growth continues to soar, data centers are grappling with the increasing power consumption, complexity, and costs associated with the demand for greater storage bandwidth and capacity. However, compute and storage continue to be underutilized, with storage servers typically oversubscribed, resulting in increased capital expenditure and operational expenditure. The Marvell SSD converter controller allows greater flexibility for data center operators and designers to develop their infrastructure and enables them to meet evolving workload demands with optimized scalable units of disaggregated flash storage and storage class memory (SCM).

"As cloud and enterprise data centers increase their deployments of flash storage and emerging storage class memories to address growing and diversifying workloads such as AI and analytics, it is paramount they optimize the utilization, efficiency and scale of these costly resources, our converter controller enables disruptive disaggregated NAND and SCM SSD architectures that can be composed, provisioned and assigned real-time to lower cloud and enterprise data centers total cost of ownership."

"Through our longstanding relationship with Marvell, we have shared a strong commitment to storage technology innovation. The development of our Ethernet direct-attached NVMe-oF SSD prototype with the new Marvell 88SN2400 is built on our collaborative vision to help our data center customers achieve higher performance, lower cost and lower power consumption."

"The Marvell 88SN2400 is the industry's first NVMe-oF SSD converter controller technology providing an innovative solution to enabling NVMe-oF architectures with existing NVMe SSDs. The ability to expose the full SSD bandwidth to the network will enhance operational efficiencies and reduce costs in the data center. Leveraging the solution's Ethernet feature will provide access to remote storage nodes with minimum added latency as compared to direct attached storage, making this solution a very interesting proposition for the industry."

The SSD converter controller is powering an innovative class of low-power, low-latency and high-performance Ethernet bunch of flash (EBOF) storage appliances. In a typical high-end 2U24 shelf with Gen3x4 SSDs, the 88SN2400 can support up to 18M input/output operations per second (IOPS). Utilizing a Marvell Ethernet switch that supports 2Tb/s and the Marvell 88SN2400, data center operators will be able to benefit from a 150GB/s pipe of pooled storage, and better power consumption per IO compared to general purpose architectures. The SSD converter controller is optimized for a small footprint and can be attached to existing backplanes providing ease of service and eliminating single point of failure. The technology can also be designed into future Marvell SSD and emerging SCM controllers.

News on if and when this will hit consumers is scant, as this is much more of an Enterprise solution.