Nintendo's Mario Kart Tour dropped yesterday amidst much fanfare. The highly anticipated mobile flavor of Mario Kart appears to be very well-received and has been downloaded over 10 million times, according to a report by Apptopia. The number is significant, as it surpasses the number of downloads Pokemon Go had on its release date. The numbers account for both Android and iOS downloads combined. Mario Kart Tour has hit the #1 Overall rank in the iOS App Store in 93 countries. The game has a 4.7 rating on iOS and a 4.3 rating on Google Play. 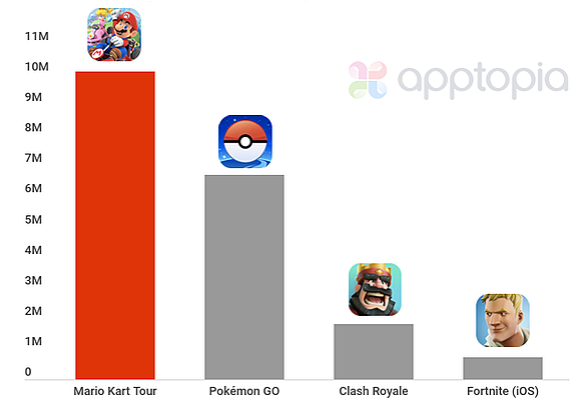 These numbers were possible due to a combination of several factors, such as IP familiarity, pre-registration bonuses, and extensive marketing. Mario Kart is Nintendo's most successful franchise and has been popular among users across all age groups. Additionally, the game was automatically downloaded and ready to play for people who expressed interest in the pre-registration program. There is, however, one factor that will drive a lot of users off Mario Kart Tour. The game requires players to sign in with a Nintendo Account, and that is certain to put a lot of new users off the game. To make matters worse, signing up for one isn't as streamlined as one would hope.

It'll be interesting to see how the game fares in the coming weeks. I'm not a fan of the Mario Kart franchise so I wouldn't be able to tell how it compares to earlier titles. Gameplay mechanics aside, another problematic aspect of the game is its Gacha system. There is even a $4.99/month Gold Pass which unlocks the extra-fast 200cc mode, obtain additional in-game rewards from racing and gain access to bonus goals exclusive to Gold Pass holders. Locking game modes behind a paywall is never a good idea and I sincerely hope Nintendo gets player backlash for that.

Mario Kart Tour Multiplayer to Make Its Debut in December

Mario Kart Tour Is Here on Android, iOS and It Comes With a Gold Pass Monthly Subscription